The Harris County Democratic Party discovered on the eve of Election Day that its offices had been targeted by vandals over the weekend, according to a Monday announcement from the local party.

In addition to filling the building’s locks with Super Glue, the criminals scrawled “ELECTIONS NO, REVOLUTION YES” and “DON’T VOTE” along with a Soviet hammer and sickle symbol in bright red spray paint on the front of the HCDP headquarters, and left a massive splash of red paint on the HQ’s front door. 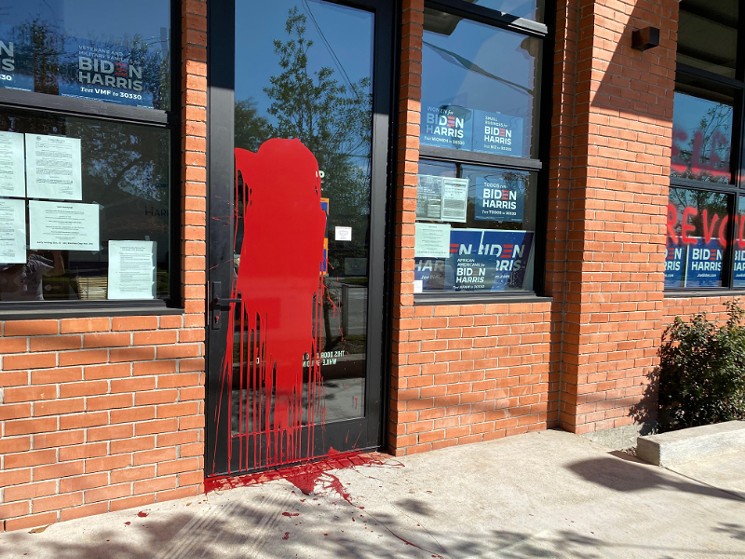 “This is what happens when Republicans are losing. They use scare tactics and intimidation to scare voters,” said Schechter.

“This will not distract us from our mission to elect Democrats up and down the ballot, making people’s lives better by enacting positive progressive policy,” Schechter continued.

Interestingly, nearly identical messages to the ones scrawled on the local Democrats’ headquarters were found over the weekend in Pennsylvania, according to local reports cited by the Texas Tribune.

On Saturday, the same seemingly Communist screed was found painted on the home of Sean Parnell, Republican candidate for U.S. House District 17 in Pennsylvania, and the office of incumbent Democratic U.S. Rep. Mike Doyle, who is up for reelection. Differently phrased anti-voting, pro-revolution graffiti was also found on Monday at the office of Pennsylvania U.S. Congressman Sean Lamb, a Democrat.

It’s unclear who is responsible for any of these acts of vandalism, and whether or not they were real honest-to-God Communists or false flag-planting conservatives as Shechter contended. No matter the culprit, it goes to show that tensions are high across the country ahead of an Election Day like no other. Here's hoping that we don't see anything more scary than spray paint and Super Glue deployed by angry U.S. residents or local law enforcement in the sure to be volatile days ahead.
KEEP THE HOUSTON PRESS FREE... Since we started the Houston Press, it has been defined as the free, independent voice of Houston, and we'd like to keep it that way. With local media under siege, it's more important than ever for us to rally support behind funding our local journalism. You can help by participating in our "I Support" program, allowing us to keep offering readers access to our incisive coverage of local news, food and culture with no paywalls.
Make a one-time donation today for as little as $1.