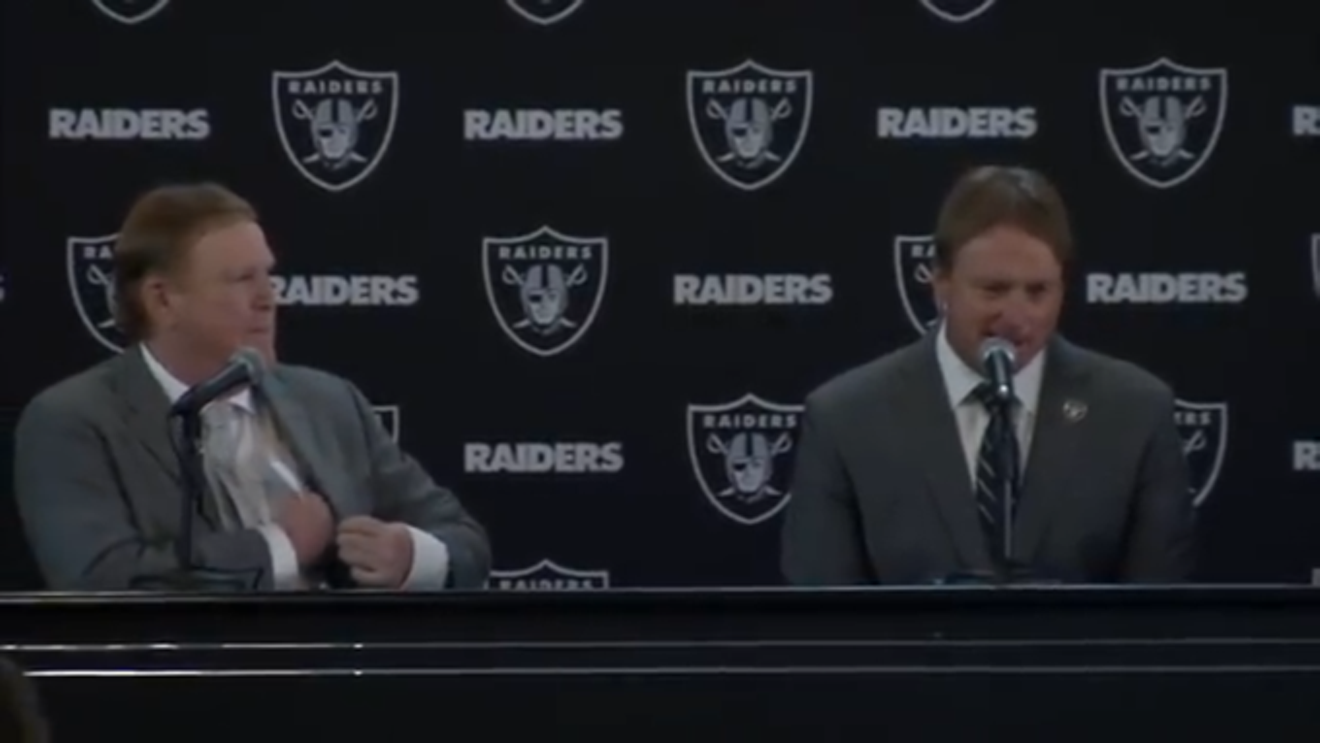 Mark Davis (left) and Jon Gruden on Hard Knocks? Yes, PLEASE! Screen grab from YouTube
It's hard to believe that this coming summer's season of HBO's award-winning NFL training camp series Hard Knocks will mark four years since the NFL Films folks were infiltrating NRG Stadium and the city of Houston to chronicle every move of the Houston Texans in the summer of 2015. It seems like just yesterday that Brian Cushing was bullying Alfred Blue....

....and that Khari Lee was doing a knockout Bill O'Brien impersonation...

....and that Ryan Mallett was finding out his "career dissipation" warning light was flashing bright red...

Those were fun times, and if this past season's edition with the Cleveland Browns, which could have easily been titled Hard Knocks: The Demise of Hue Jackson, is any indicator, we should be in for some more good stuff in the summer of 2019. The big question — which team will serve as the subject?

As has been outlined here before, there are certain teams each off-season that cannot refuse doing the show if the league asks them to do so. These are the teams that fit all three of these criteria — (1) they missed the playoffs the last two years, (2) they've never been the team subject on the show before, and (3) they have a coach who is beyond his first season with the team.

So, without further ado, here are the five teams eligible to be compelled by the league to do Hard Knocks this summer, in reverse order of my preference of seeing them on the show:

5. SAN FRANCISCO 49ERS
Generally speaking, the better run the organization, the less fun a team is to watch on Hard Knocks. Is there any doubt that the Patriots would be the most boring team on that show? The Niners, despite missing the playoffs the last two seasons, are one of the better run outfits the last two years with head coach Kyle Shanahan and GM John Lynch. The Jimmy Garoppolo ACL tear killed their season in 2018. This should be a team on the rise next season, but other than Jimmy G's return, I don't see a ton of other storylines that make me want to carve out my Tuesday night.

4. NEW YORK GIANTS
With the Giants, you almost need Eli Manning to be a part of this to keep it watchable, and not necessarily because Eli is some tour de force. Personality wise, he feels like the exact opposite of that. We need to watch the continued deterioration of the morale of actual good players (Odell Beckham comes to mind) as Eli gets an eight figure annual golden parachute to lead the team to five wins. Stay after it, G-Men!

3. WASHINGTON REDSKINS
It feels like, between owner Daniel Snyder, head coach Jay Gruden, and the gaping cavity under center left behind by Alex Smith's season ending broken leg in 2018, it all adds up to a pretty solid clown show. Smith's broken leg was bad enough, but then infections in the hospital put his career in jeopardy. Last year's second round pick, RB Derrius Guice, also had infections stemming from his season ending knee injury. Perhaps if the Redskins are the choice for Hard Knocks, it could double as a five episode hit piece on the germ-infested hospital the Redskins are using to repair their players' bodies.

2. DETROIT LIONS
Hey look, I'm no GQ model, but Matt Patricia might be the frumpiest, least impressive successful earner on the entire planet. Honestly, seeing exactly how poorly Patricia conducts his business — and by business, I mostly mean clothes and hygiene — would be a fascinating five episode watch. I'd watch Hard Knocks the same way I watch Hoarders — wondering "How in the hell does it get this bad?"

1. OAKLAND RAIDERS
You have an owner who looks like he cuts his hair with a spoon, a head coach who seems intent on trading the entire roster for half the picks in the 2019 and 2020 NFL Drafts, and a quarterback who is literally challenging talking heads on ESPN to cage fights in an octagon. Oh, and this team still doesn't have a home for 2019 because they're being sued by Oakland on their way to moving to Las Vegas.

This race isn't even close — give me the Raiders or cancel my cable!