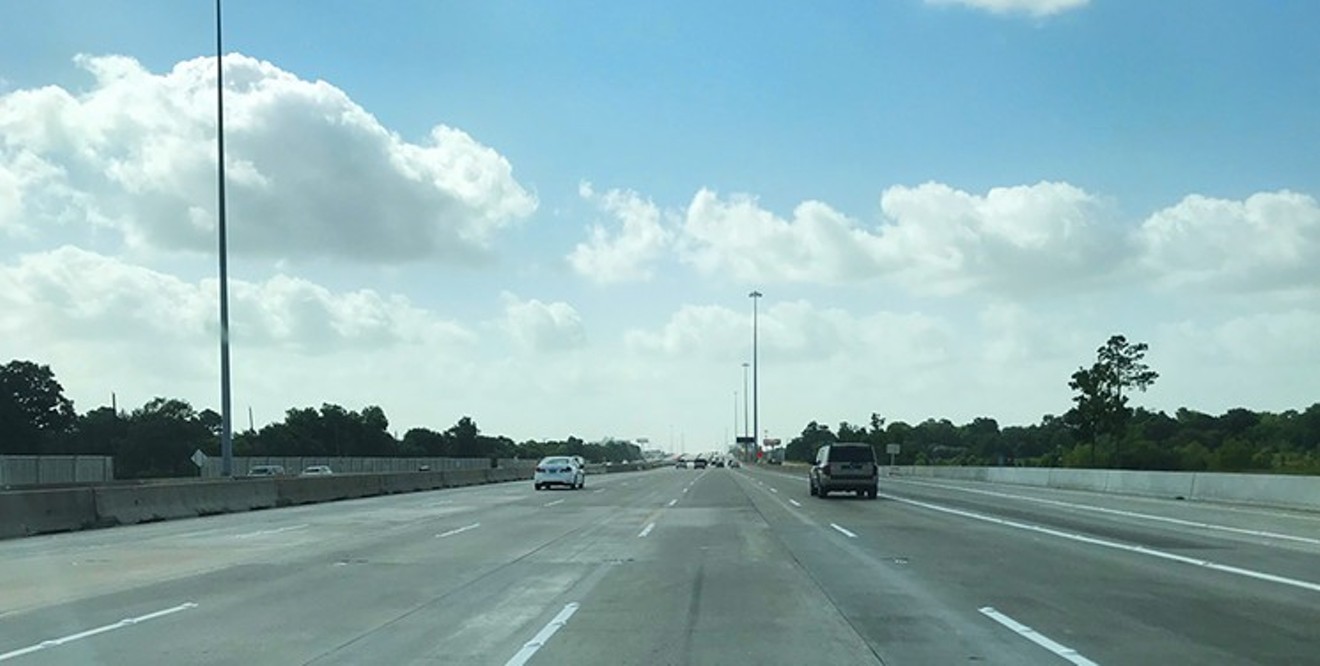 Look at all those glistening wide lanes on 290. Photo by Jeff Balke
First, let's preface this by saying NO ONE is happy about traffic. Not us, not you. Nobody. It's one of the worst characteristics of a city that is, otherwise, pretty damn awesome. Having said that, there are some reasons to feel good about where the city is going when it comes to traffic concerns.

It's unfortunate that the no pain, no gain axiom has to apply so directly to area drivers, but it's Thanksgiving and we may as well try and find the silver lining, even when it comes to Houston traffic.

Some of you may laugh when you read that, but when you consider the construction project, which was scheduled to take seven years, survived the loss of a major contractor, Hurricane Harvey and two of the worst floods in Houston history focused almost directly on northwest Houston, it's remarkable that they are on track to finish one year later than expected.

In the last six months, most of the construction near the 610 interchange has been completed and large stretches inside the Beltway have opened to five lanes each way. Considering the struggles to reach completion, that's serious progress.

Look at the Katy Freeway now.

For those of us who have struggled with the construction on 290, look to the Katy Freeway for an understanding of what it can be. Sure, there is still traffic, but if you think it is as bad as it was before the expansion, you didn't live here. We will always have traffic, but I-10 is substantively less congested than it was a decade ago thanks to expansion.

Some of the plans for I-45 look super interesting.

None of us want to think about the nightmare that is coming with the massive construction project for the Interstate 45 corridor, but if you take a moment to look at some of the proposed options, there is a lot to like. The elevated stretch of 59 that will merge with 45 when complete is slated to be, at least in part, below grade with green space and pedestrian-friendly areas above. The same goes for areas just north of downtown near North Main.

Then there is what will become of the Pierce Elevated. From an elevated park to a wide parkway (similar to Allen Parkway), anything is better than the dingy highway blocking the view of downtown from the west.

With all the growth, imagine Houston without the changes.

It's reasonable for all of us to complain about the struggles, but imagine what would happen if nothing was done and the city continued to swell. Ask people in Austin, who have not invested in any major infrastructure plans despite rapid growth over the last decade. Traffic there is, on a smaller scale, worse than Houston.

It is expected we could add several million people to the region by 2040. Better to be ready than to wonder what the hell happened even if it means brutal construction and terrifying traffic on the way.
KEEP THE HOUSTON PRESS FREE... Since we started the Houston Press, it has been defined as the free, independent voice of Houston, and we'd like to keep it that way. With local media under siege, it's more important than ever for us to rally support behind funding our local journalism. You can help by participating in our "I Support" program, allowing us to keep offering readers access to our incisive coverage of local news, food and culture with no paywalls.
Make a one-time donation today for as little as $1.