Even though Omicron generally does not cause the severity of illness or death that the earlier variations of COVID-19 arrived with, the sheer number of cases is overwhelming local medical facilities, Hidalgo said.

"The positivity ratio is through the roof," Hidalgo said at her afternoon press conference, adding that 18.1 percent of patients in ICUs are there because of COVID. 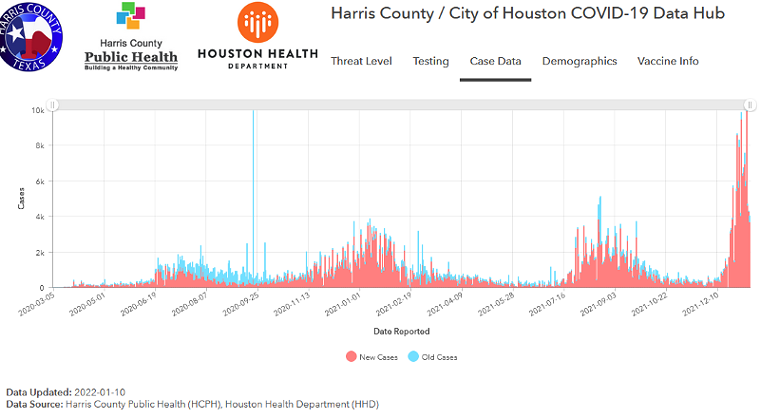 This situation doesn't skip those in the medical profession. People who are vaccinated with booster shots can still get Omicron, but nearly all of the recent hospitalizations have involved unvaccinated people. Hidalgo said the area is receiving an additional 900 nurses from the state with the hopes of bringing another 600 nurses from out of state. Dr. Erika Brown, Harris County deputy Local Health Authority, said other states have similar needs for additional medical personnel.

"We are receiving requests from the hospitals right now that they simply do not have enough staff to deal with this."

Methodist Hospital System which led the way on requiring that its employees be vaccinated against COVID-19, last Friday announced another deadline: this time for booster shots for its doctors and nurses by January 31 and all other employees by March 1..

Predictably enough, Dr. Mary Bowden, the ear, nose and throat doctor who resigned after Methodist suspended her for "spreading dangerous misinformation which is not based in science," isn't in favor of the latest move by Methodist either. In a statement released by Dolcefino Consulting, the River Oacks doctor argued that requiring a booster "will only lead to further staffing shortages at a time when hospital admissions are rising, putting patient care further at risk.”

Bowden promoted the use of ivermectin on social media last year and opposed vaccine mandates.
KEEP THE HOUSTON PRESS FREE... Since we started the Houston Press, it has been defined as the free, independent voice of Houston, and we'd like to keep it that way. With local media under siege, it's more important than ever for us to rally support behind funding our local journalism. You can help by participating in our "I Support" program, allowing us to keep offering readers access to our incisive coverage of local news, food and culture with no paywalls.
Make a one-time donation today for as little as $1.