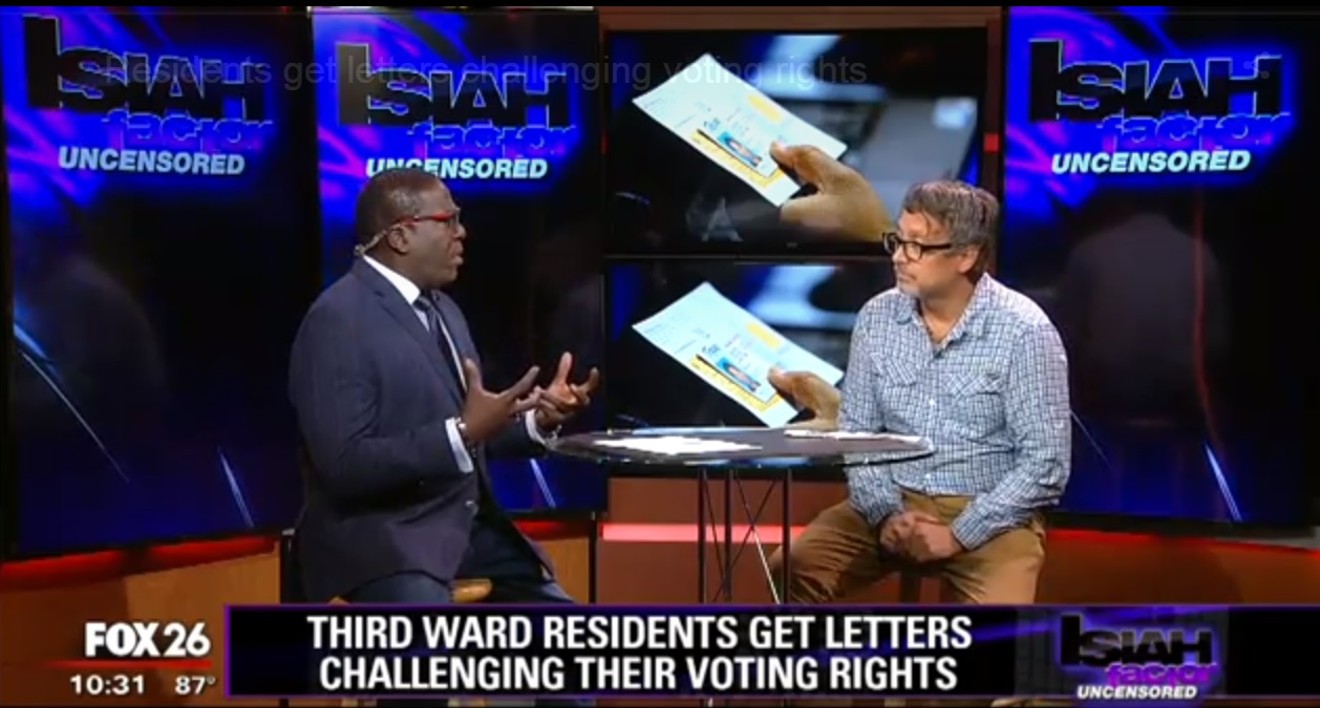 Lynn Lane discusses his voter suspension on Fox Screencap of The Isiah Factor
*See update at the end of this story.

The Harris County Republic Party is under fire at the moment following allegations that they targeted voters in areas populated by minorities for challenges to their voter registrations. By challenging these locations under the guise of rooting out voter fraud, the party has effectively suspended the voting rights of people living at those addresses.

The Republican Party campaign was undertaken by Alan Vera, chairman of the party's Ballot Security Committee and involved 4,000 addresses. According to Thomas Wang, a Republican candidate this year for Texas House District 147, the challenged addresses corresponded to post office box locations:

“The inquiry into the voter suppression was initiated by members of the Harris County Republican Party who wanted to ensure that citizens are registered to vote in the precinct for which they resided and challenged the registrations of voters in Harris County who are registered to vote at street addresses corresponding to post office box locations.”


One such person was Third Ward resident Lynn Lane, a prominent local photographer. Despite living at the same address for the past five years and voting in every election, he received a letter from Harris County Tax Assessor-Collector and Voter Registrar Ann Harris-Bennett’s office informing him that his registration was suspect and that he had to provide proof of residency or face loss of his voting power. By law Harris-Bennet's office must respond to the challenges with official notices to residents informing them they are in danger of losing their right to vote.

Lane was not the only one. Several people he knew, including a neighbor, had received similar letters, all in minority neighborhoods. Tim Lankford, who previously resided in the heavily-minority area at Beltway 8 and Bissonnet, also received one forwarded from his recently vacated address.

The post office box claim is somewhat strange. Both Lane and Lankford say they have never had a post office box. Thus far, neither Vera nor the Harris County Republican Party have responded to our attempts to contact them for comment.

Subsequent investigation has revealed that Vera has long been driven by a quest to stamp out what he considers to be rampant voter fraud. In October of 2016, he conducted training in Clear Lake designed to “ensure election integrity in Texas.” The training was for election judges, alt-judges, clerks and prospective poll watchers.

Republican-led poll watcher and voter challenger initiatives have been linked with voter intimidation and suppression in the past. Common Cause, a non-partisan election watch dog group, assembled a report on the practices in 2016 using key presidential battleground states like Florida and Ohio. They found:

Parties and groups alike have conducted mass challenges, often targeting poor and minority communities, the “certain areas” alluded to by [Donald] Trump. Wherever they occur and whatever the circumstances, challenges can be disruptive for the voter, others in the precinct, and election officials. Challengers often question the citizenship, residence, or identity of individuals or groups of voters.


Harris-Bennett’s office has already been sued by the Public Interest Legal Foundation, who says that the office is withholding information “related to noncitizen registered voters either reporting their own unlawful registration or discovered thanks to officials efforts.” Their amicus curiae brief alludes to “thousands” of potential voter fraud cases, backed by testimony of former Harris County Tax Assessor-Collector Mike Sullivan. The county responded that the information related to individuals who appear on the registration rolls but who may not fulfill all citizenship requirements is protected under state law.

The PILF already has a bad reputation for overstepping itself in voter fraud cases. Last year they questioned the voter rolls in Bryan County, Georgia, saying they were in violation of the National Voter Registration Act and had more voters registered than the eligible population in the county. Jon Greenberg at Politifact fact-checked the claim, and found the PILF had badly misused data to paint the county in a false and negative light.

In any case, voter fraud is a far smaller problem that most Republicans, including the president, tend to claim that it is. The Brennan Center for Justice found that the rate of provable voter fraud falls between 0.0003 percent and 0.0025 percent, and that the most common causes were clerical errors and honest mistakes rather than malicious intent.

One example was Texas native Crystal Mason, who was found guilty and sentenced to five years in prison for casting a provisional ballot at her church in 2016 after her name couldn’t be found on the rolls. Mason claimed her vote was a mistake, and didn’t know that she was barred from voting after serving 60 months in prison for tax fraud. A petition that circulated around the time of her arrest pointed out the disparities between the fates of Mason, who is black, and Terri Lynn Rote, a white Iowa woman who received a fine and probation for voting for Trump twice.

The Harris County Republican Party, Alan Vera and the PILF have engaged in a campaign under the banner of election integrity to question the legitimacy of thousands of Houston voters. So far, those challenges come from people exclusively in areas where minorities and Democratic votes tend to be numerous. Update: 10:30 a.m. 08.25.18: According to the Houston Chronicle, the challenges were distributed throughout Houston and Harris County although it's difficult to understand how they know this since their story on it said Harris Bennett declined to share the challenge addresses with it.

It is a campaign in keeping with Republican tactics throughout the country that Brentin Mock at City Lab has chronicled extensively, showing that poll watching and voter registration challenges such as is taught by Vera contribute to the suppression and disenfranchisement of minority voters who generally vote blue.

Houston has become increasingly purple as a city over the last several cycles. Both Barack Obama and Hillary Clinton carried the area in the last three elections, the latter of whom took the county by 160,000 votes in 2016. Beto O’Rourke is close to becoming the first Democratic senator from the state in a generation. It’s understandable that Republicans might be nervous about their prospects in the 2018 midterm elections.

However, their registration challenges have already put lawfully registered citizens in suspended status, and may further endanger the voting rights of those who don’t check their mail carefully for a letter questioning their voter registration they have no reason to expect they would receive. The claim that these challenges are related to addresses linked to post office boxes has not held up under scrutiny from the two people challenged who would speak with us. Though people voting in November are permitted to file provisional ballots if they find themselves removed from the rolls when they arrive at their polling place, Mason’s example of what can happen if they are wrong and caught can be discouraging. The possible detrimental effect on minority and Democratic voter turnout appears from this evidence to be a feature, not a bug, of Republican instigators.

Those interested in voting in the upcoming election should regularly check their status on the Secretary of State website and be on the alert for any voting correspondence that might show up in their mailbox. Answer all such communications promptly and as instructed. Election Day is November 6, with early voting starting October 22.

Update 4:55 p.m. 08.22.18:  Paul Simpson, Harris County Republican Party Chair, today finally responded to questions about the Republican Party's 4,000 challenges to voters living in minority dominant areas — challenges that at the very least suspended these residents' voting privileges until they can prove they live where they say they do.

He blamed it all on the Harris County Voter Registrar Ann Harris Bennett, saying she never should have suspended these voters. Instead, he said in a press statement released just now, that she should have verified the addresses before taking any other action. The challenges were made by Alan Vera, the Harris County Republican Ballot Security chairman. Simpson said further:

“This also shows that the Harris County Democrat Party doesn’t understand the law, and traffics in ‘fake news’ in a futile effort to gin up support for dismal Democrat candidates dedicated to failed left wing policies that Texans reject. Or do Democrat voters actually live in UPS stores, industrial facilities, and the Harris County jail?

“Democrat Voter Registrar Ann Harris Bennett should NOT have jumped the gun by suspending those voters’ registrations. Instead, the law requires her to give them 30 days to respond to a written inquiry about their residence, to ensure they vote in the right jurisdictions. We urge Democrat Ann Harris Bennett to follow the law and quit violating voters’ rights.”