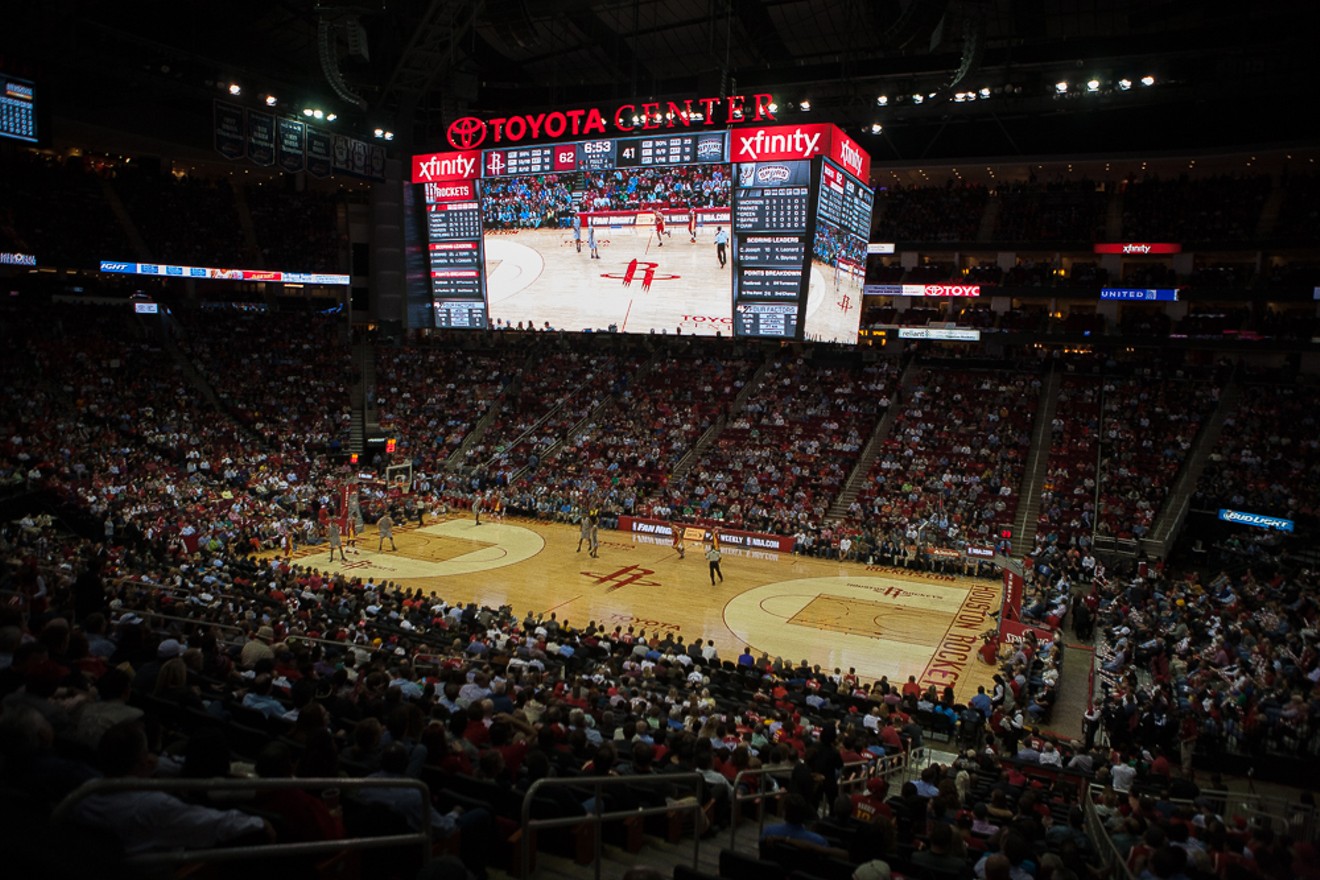 Imagine if the ransomware came up on the jumbotron! Photo by Eric Sauseda
On the floor, the Houston Rockets might not be very good right now. In fact, they are possibly the worst team in the NBA. But off the floor, in the bowels of the Toyota Center inside what we imagine are windowless concrete rooms filled with nerds drinking orange soda surrounded by computer screens and posters of Counselor Troi, they are champions.

According to reports, the Rockets were the victims of a ransomware attack, but thanks to the good preventative measures and a keen eye for the telltale signs of hacking, they prevented a serious breach, not only protecting sensitive information like the secret algorithm Daryl Morey used to use evaluate players (he thought he took it with him on that thumb drive, but we know better), but having their systems held hostage for loads of cash.

Ransomware is when hackers manage to gain entry into your network or computer and insert code that locks everything, at which point they demand money to unlock it or they will delete all your information or worse, put it onto the dark web. The average costs paid by businesses to unlock compromised computer networks in the last year has been right at $300,000 according to a report released in March.

Besides the money and the protection of data, there is the embarrassment that comes along with allowing some cyberbully to steal your stuff and take your money.

In 2015, the Houston Astros suffered a different and dumber kind of "hack." Christopher Correa (no relation), who worked for the St. Louis Cardinals when Jeff Luhnow was a scout with the organization, broke into the Astros "Ground Control" operations network using an old password Luhnow allegedly re-used in Houston — we heard it was "password1." Correa got 46 months in prison for his efforts and the Astros looked kinda like idiots for letting it happen.

The Rockets have been one of the most progressive teams in the NBA when it comes to analytics, use of video and technology. So, it shouldn't be a surprise that they also have their act together when it comes to protecting sensitive computer systems. They are working with the FBI to try and find the parties responsible.

Now, if the team could just be as good as the geeks they hire to protect their computers.
KEEP THE HOUSTON PRESS FREE... Since we started the Houston Press, it has been defined as the free, independent voice of Houston, and we'd like to keep it that way. With local media under siege, it's more important than ever for us to rally support behind funding our local journalism. You can help by participating in our "I Support" program, allowing us to keep offering readers access to our incisive coverage of local news, food and culture with no paywalls.
Make a one-time donation today for as little as $1.