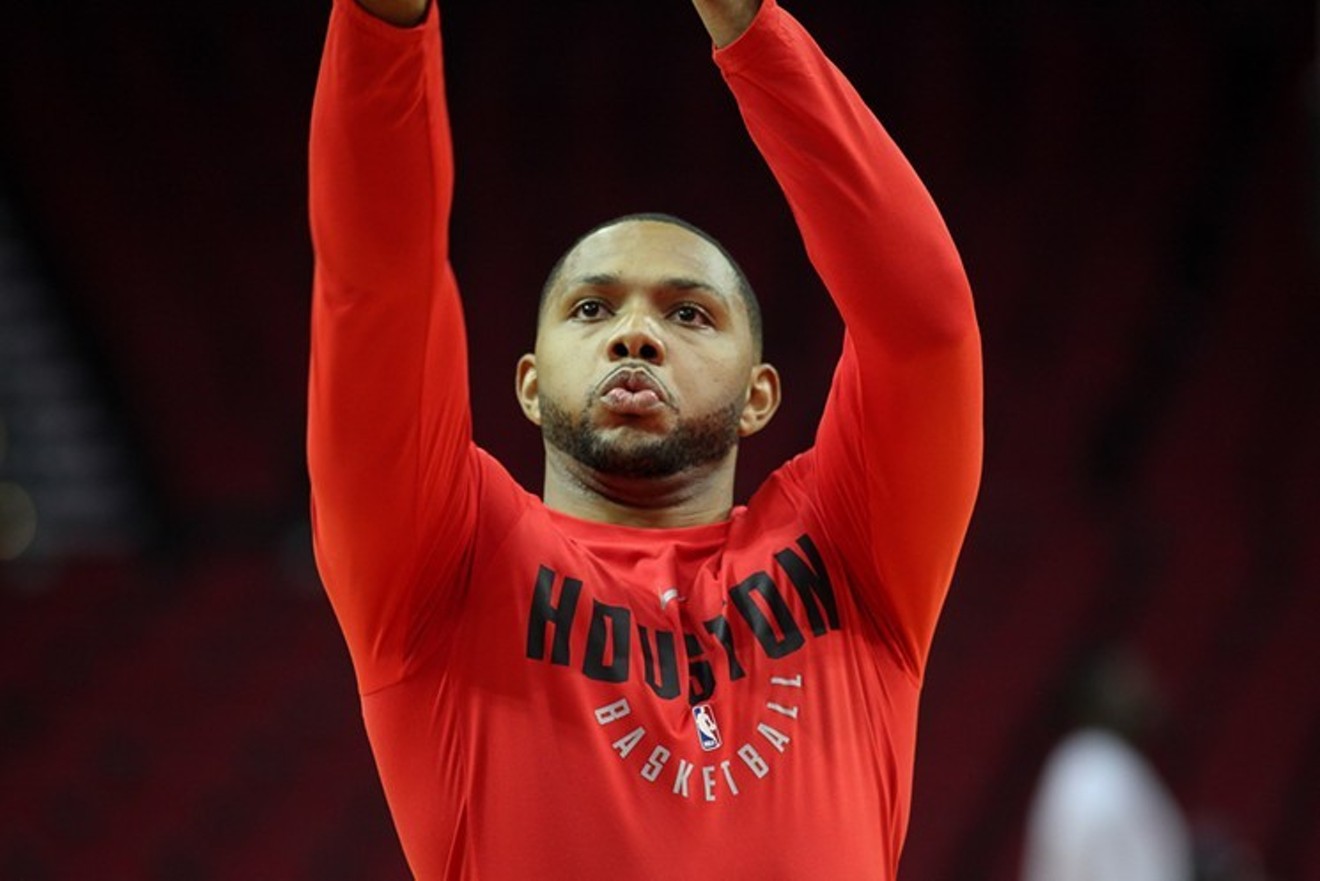 Eric Gordon struggled much of game one against Golden State. Photo by Eric Sauseda
Home court advantage is overrated, right? The Rockets will find out after they dropped game one of the Western Conference Finals at Toyota Center on Monday night 119-106 to the Golden State Warriors. It was a tie game at the half and it looked like it could turn into a barnburner of a game and a series. But the Warriors did what they do, taking advantage of every Rockets mistake and missed shot.

The Rockets will have to win Wednesday night in order to avoid going to Oakland down 0-2 in the series, a hole they would almost certainly be unable to climb out of.

The talk leading up to this series has pointed to how good the Rockets and Warriors both were in the regular season. But, if the playoffs teach us anything, it's that the regular season often counts for very little in the postseason, particularly when it comes to match ups against teams like Golden State. As good as the Rockets have been throughout the season and the playoffs, they have finally run into a truly great team and it cost them in game one.

The Rockets small forward had a game he'll want to forget going 0-6 from the floor, four of those on point blank shots at the basket. After returning from a second shoulder injury, it was though Mbah a Moute's defensive skills would be key to the Rockets chances in this series. But, it is difficult to make up for the rough offense, particularly on Monday night. You just can't miss easy shots against a team as good as Golden State.

With 65 wins in the regular season, the Rockets did everything they could to attain home court advantage throughout the playoffs, but one loss and that advantage is up in smoke. The Rockets absolutely have the ability to win on the road against Golden State, but they just made their task much, much tougher and put the pressure on themselves in a must win game on Wednesday.

We've heard it from both sides. One one side are those who have watched the Rockets win 65 games and two playoff series on pick and roll and isolation. On one side are those who hate the isolation style of offense. For one game, the haters won. The dichotomy between the Rockets game and the Warriors fluid passing game made the stagnant-looking offense, dribbling the ball for 22 seconds and heaving up an ill-advised shot, even more exaggerated than normal.

As was pointed out repeatedly during the game one broadcast, Harden has been magnificent in the first game of each playoff series. Monday was no different. He put up 41 points on 14-24 shooting and had 7 assists. On more than one occasion, he kept the Rockets in the game almost single handedly. The question is whether playoff game one Harden will show up in game two and beyond.

When Golden State was losing games at the end of the season thanks to injuries some believed weren't even real, most believed they were simply saving themselves for the playoffs. Thus far, they are 9-2 and didn't really look all that challenged by the Rockets, the team that was supposed to give them a real run for their money this season. People have been calling this the "real" NBA Finals. Unfortunately for the Rockets, the real Warriors showed up.

Thompson shoots 42 percent from the three point line. The Rockets left him open on multiple occasions thanks to poor defensive rotations. Whatever the reason, Thompson made them pay, hitting six three pointers, most coming in the second half. Memo to the Rockets: you cannot leave that guy unguarded.

Then there is the unguardable Durant. We said he was the one nightmare matchup the Rockets had to contend with and he did not disappoint, scoring 13 on 14-27 shooting. More importantly, he morphed the game because the Rockets had no answer for him during a long stretch of the third quarter. If they can't find an answer for him, it is going to be a short series.
KEEP THE HOUSTON PRESS FREE... Since we started the Houston Press, it has been defined as the free, independent voice of Houston, and we'd like to keep it that way. With local media under siege, it's more important than ever for us to rally support behind funding our local journalism. You can help by participating in our "I Support" program, allowing us to keep offering readers access to our incisive coverage of local news, food and culture with no paywalls.
Make a one-time donation today for as little as $1.