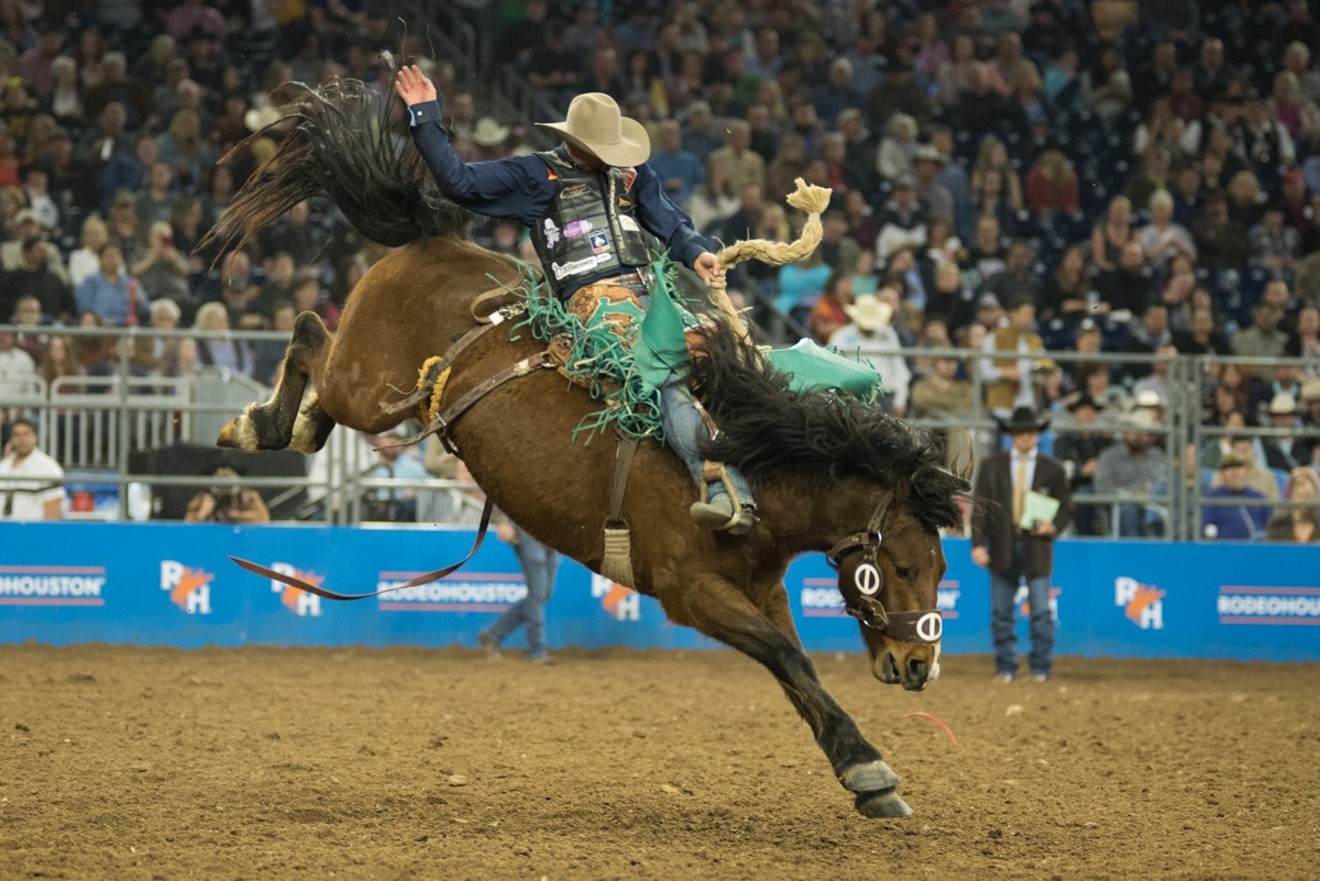 Looks like we're not going to get a full ride. Photo by Jack Gorman
In an unprecedented action, local officials announced today that they are cutting short the run for the Houston Livestock Show & Rodeo amid coronavirus fears. It had been expected to continue through March 22 after its opening day on March 3.

In a hastily called press conference scheduled for noon today that was getting a late start, Houston Mayor Sylvester Turner delivered the news in a calm, deliberate manner. He said that until Tuesday all of the cases that had been confirmed locally had been related to international travel. On Tuesday, a case was confirmed in Montgomery County that was not tied to international travel. "And that changed things. That was evidence of some community spread," Turner said. He said he got the news around 8:30 p.m. Tuesday.

Joel Cowley, CEO of the Houston Livestock Show and Rodeo said there would be no further concerts or rodeo competitions but that some events going on today would continue with the aim of having all guests off the grounds by 4 p.m. today. He said instructions about how to be reimbursed for unused tickets and carnival packs would appear soon on the HLSR website.

To applause, Cowley said despite the vastly decreased revenues, the Livestock Show and Rodeo still would be able to give out youth scholarships.

"I will be signing an emergency health declaration that will remain in place for seven days.," Turner said. "That means for the Houston Livestock Show and Rodeo they are directly impacted. We are all in agreement." As of tonight, he said, the concerts will come to an end. After seven days the mayor and council members will reassess whether the declaration needs to be extended, he said.

Harris County Judge Lina Hidalgo speaking after Houston Mayor Sylvester Turner by her side.
Photo by Kate McLean
Events for the month of March that are permitted through the city are either going to be rescheduled or canceled, he said. He said he would coordinate with Harris County Judge Lina Hidalgo. She said she would be issuing a disaster declaration for Harris County in addition to the emergency declaration for the city that Turner said he would be issuing.

She said it became apparent this weekend that thanks to a limited number of coronavirus testing kits they already were not able to process as many cases as they would have liked to. She predicted that there are probably more cases than people know. "We are not an island nation. We can't close our borders," she said. "So we have to recognize that despite our containment efforts we will see wider spread of this virus."

She referred to statistics showing 80 percent of people exposed to the virus will come through it fine, but that 20 percent of the people involved face more serious consequences.

Reportedly a petition signed by thousands of people urged an early shutdown. Earlier, rodeo officials had said they planned to continue since most of the attendees are from the immediate area. They had also stressed they were intensifying their cleaning schedule as well as offering more sanitizer stations throughout the NRG complex.

However,  the mounting number of cases in the greater Houston area apparently persuaded them to take another look. This follows the cancellation of SXSW by Austin officials and cancellation of the huge Ultra music festival in Miami. 97.9's Spring Fest at Revention on March 20 has been canceled and this weekend's Bayou City Art Market in downtown Houston has been postponed.

Once again, Turner asked people not to panic. "Yes you can go to the store. But purchasing the toilet paper, I don't get that."

"The decisions we have made today were not just made in a vacuum. We've made it with the Texas Medical Center, CEOs and I can rightfully say to you we are all on the same page," he said.


A statement issued by the Houston Livestock Show and Rodeo:

In the interest of public health, the City of Houston and the Houston Health Department have ordered the Houston Livestock Show and Rodeo™ to close. The Rodeo will respectfully and dutifully comply with the City’s order.

The Rodeo is deeply saddened; however, the safety and well-being of our guests and our community is our top priority. Out of precaution, the City has decided that this is the best course of action for our community.

The Houston Livestock Show and Rodeo has been a fabric of this community since 1932. Having to close early is extremely difficult as guests, volunteers, exhibitors, rodeo athletes and entertainers look forward to the 20 days of the Rodeo each year.

We look forward to the 2021 Houston Livestock Show and Rodeo to continue to promote agriculture, education, entertainment and Western heritage. We will provide additional information as it becomes available. Updates will be posted at rodeohouston.com/2020.

Projections about coping with COVID-19
Graphic by Houston Health Department

Jennifer Lake, Violeta Alvarez and Margaret Downing contributed to this article.
KEEP THE HOUSTON PRESS FREE... Since we started the Houston Press, it has been defined as the free, independent voice of Houston, and we'd like to keep it that way. With local media under siege, it's more important than ever for us to rally support behind funding our local journalism. You can help by participating in our "I Support" program, allowing us to keep offering readers access to our incisive coverage of local news, food and culture with no paywalls.
Make a one-time donation today for as little as $1.