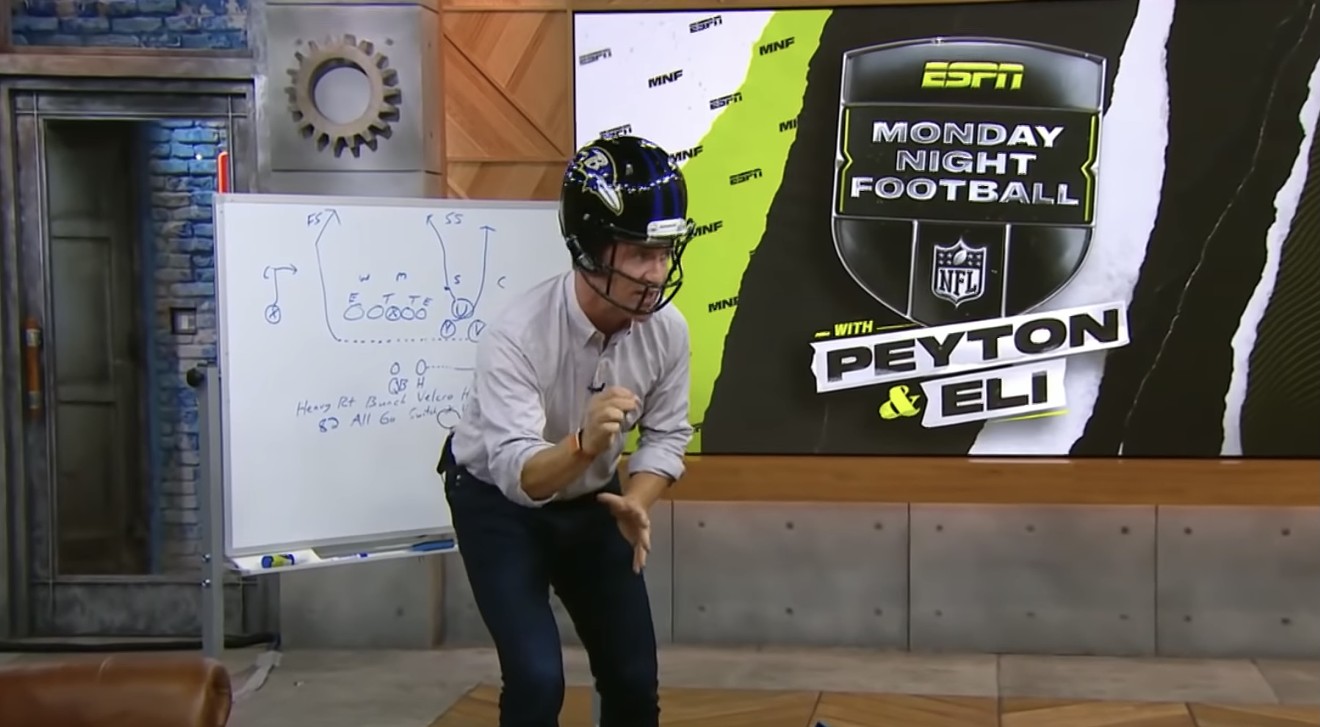 Peyton Manning was highly entertaining on Monday night's alternate ESPN feed, but there is room for improvement. Screen grab from YouTube
When Monday Night Football was created back in September of 1970, it was with the idea of giving the popular sport of football its own prime time platform, on a night normally reserved for sitcoms and television dramas. We know now, the thirst for football in the United States is insatiable, with professional football now occupying prime time slots three nights a week, and with the annual TV revenue exploding into the tens of billions of dollars stratosphere.

With the advent of streaming platforms supplementing the already massive number of cable channels, we are in a time of not just unprecedented availability of games, but a time where we can tailor the viewing experience to meet our individual sensibilities.  Among the many developments in the "customization of consumption" phase are the alternative viewing feeds.

That brings us to ESPN's latest supplement to the MNF franchise, the alternate viewing of the Monday night games on ESPN 2 with Hall of Fame Peyton Manning and his younger brother Eli, both retired winners of multiple Super Bowls, providing casual commentary to the Monday night game each week on a feed being informally referred to as the "Manning Cast." On paper, this is an idea with a ton of potential, as the Manning brothers are two of the most affable, respected, and popular athletes out there.

This past Monday night, the idea went from paper to TV/laptop/iPhone screen, as the Manning brothers conducted their first "Manning Cast" of the 2021 NFL season. (NOTE: As of right now, there will be ten, in total, with the next one coming up this coming Monday.) Since the NFL doesn't allow embedding video on sites not owned by the NFL, you can view the "Manning Cast" highlights on YouTube.

While it was largely well received, here are four suggestions that I have to improve the product:

4. Scrap the forced bits, football jargon and minutiae
The roughest part of the "Manning Cast" was the first 30 minutes or so, which saw Peyton and Eli trying to shoehorn forced "bits" into the broadcast, like Peyton imitating Jon Gruden's play calling style, Peyton imitating Lamar Jackson's cadence (complete with way-too-small Ravens helmet on Peyton's ample dome), and Peyton drawing up the play that was just called on a white board WHILE the game was going on, which would be fine except that the producers cut away from the live action to show Peyton drawing up plays. All of these elements were slathered in obscure football "lingo" that the average viewer probably doesn't understand nor care about. Over time, the Mannings and the producers seemed to realize that folks were coming to the store for a light, non-technical "watch party" where the main selling point was the affable intelligence and casual humor of the Manning brothers.

3. Make sure the guests bring something to the table
Interestingly enough, it was the Mannings' first guest, Charles Barkley, that kind of injected some order and slowed things down for the broadcast. As he is when dropped into any broadcast situation, Barkley was great, with his impeccable timing and self-deprecating humor. More than anything else, he was a walking reminder that people mostly tune into former pro athletes to get consumable insight (i.e. stuff that can make them sound smarter talking the game, without sounding annoying) and pleasant humor. In short, Barkley was the perfect leadoff guest. Ray Lewis was fantastic going second, as his perspective from the defensive side of the ball was fascinating. Peyton Manning was even learning stuff from Lewis, which is saying something. As for the other guests, Chiefs TE Travis Kelce was his usual unlikable, spotlight hogging self, and Seahawks QB Russell Wilson was just boring. My suggestion here would be to bring in guests who are either as likable and/or as football-intelligent as the Mannings. Otherwise, the guests are just eating into minutes where we could get more Peyton and Eli.

2. Invest in better audio equipment solutions for guests
This is an easy one, because it's not like the guests called into the show impromptu. These were all planned guests, so why, if they are on a Zoom feed, are they using their computer microphones like they're talking to their Aunt Betty? Russell Wilson actually had headphones with a microphone attached, and somehow was the worst sounding out of all the guests. Send these guys some microphone equipment the week before, test it out a couple days before, and let's make it a little more pleasant on the ears, please!

1. Reset the game elements from time to time
While the casual "bar room" nature of the "Manning Cast" is a big part of its appeal, a lot of us watching are still interested in minute things like the down and distance, the score, how we arrived where we are in the game, injuries, and so forth. An occasional resetting of the game's storylines and current statistical elements would have been welcomed. This is where the Mannings' lacking a classical broadcaster in there with them shows itself. In the end, I'd rather the broadcast be Peyton, Eli and Friends, than plunk some Syracuse graduate du jour in with them to steer the ship, but I think if they can act least be cognizant of resetting periodically, it'd go a long way.