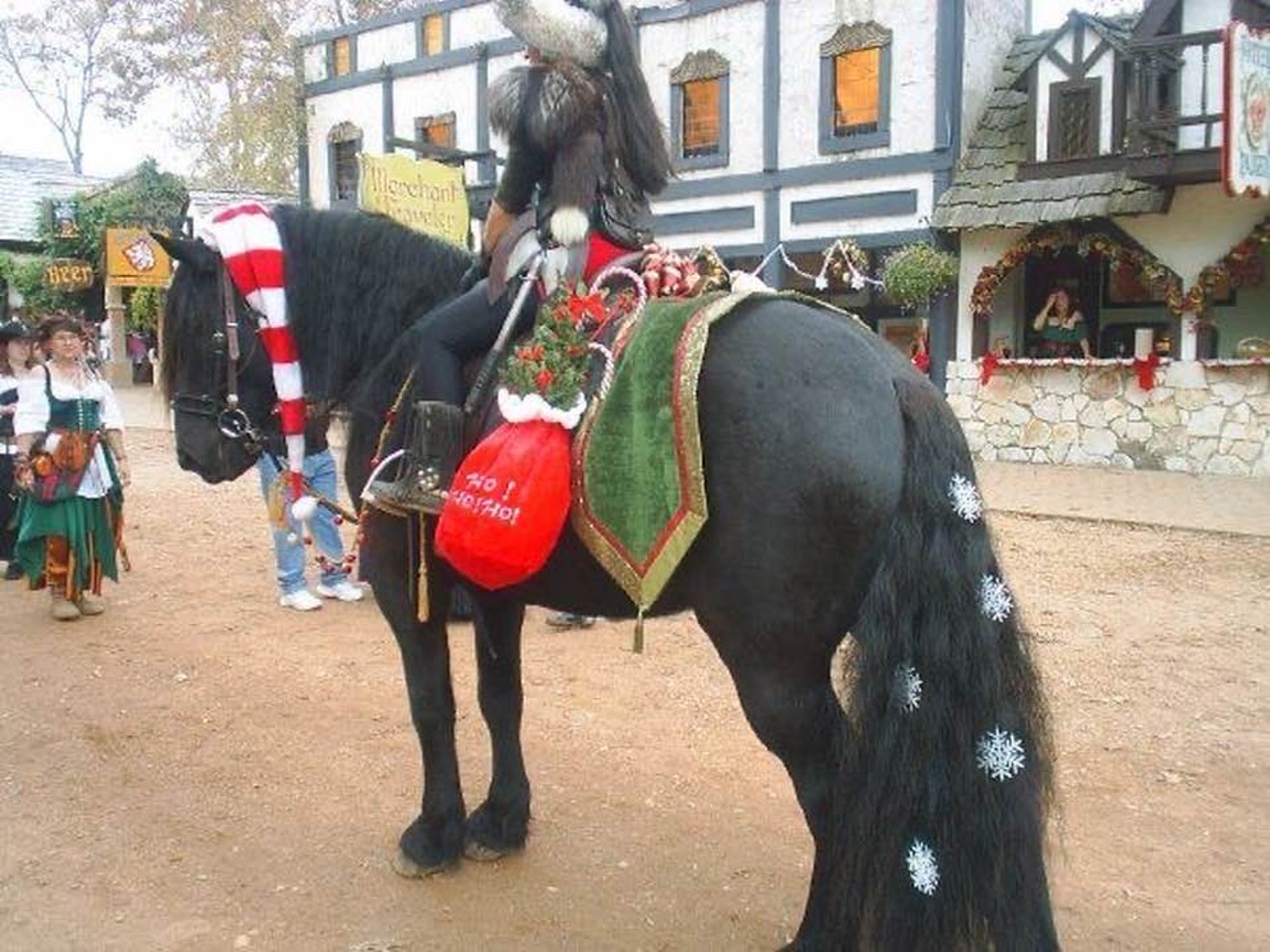 Sampson in his holiday gear. Photo by M. Ferguson
As if 2020 wasn’t rough enough, one of the most beloved figures in the Texas Renaissance Festival, Sampson the Warhorse, died on Sunday, November 8 after nine years on the fair fairgrounds delighting visitors. He was 18-years-old.

“I was so blessed to have him in my life,” says owner/trainer Angela Lorio aka Kiva.

The strikingly huge Sampson was a Percheron, an enormous breed of draft horse descended from the mounts of European knights that found new life as carriage pullers and fire brigade engines in America. At his peak, Sampson stood 17.75 hands (nearly six feet) high at the withers and at 1,800 pounds weighed more than some sports cars. Lorio began training him when he was three years old, and it did not take long for her to realize that she had something special on her hands. In addition to his towering presence, he was possessed of a calm, gentle demeanor and a sparkling intelligence that made him seem magical.

Lorio had been a performer and shop manager at Ren Fest since 1992 when she decided to audition Sampson for a role in the faire for the 2010 season. Initially, she was only looking to ride him the in the daily parade, but the second Sampson appeared he commanded too much attention for such a brief role.

“I saw all these faces turn to look at him, obviously wanting to pet him,” says Lorio. “I asked the management, ‘can I, m’lord?’ He said yes, and to this day I can still hear the sound of dozens of flip flops as they raced over to touch him.”

Thus, began Sampson’s career as an attraction. Even at a place where you could see everything from elephants to paper mache giants to people in chain mail bikinis, he turned heads like no other. Up close, he was almost too big to be real, and it was only when he would nod his head in regal greeting that a visitor could be sure he wasn’t an incredibly crafted statue of an ancient warrior. 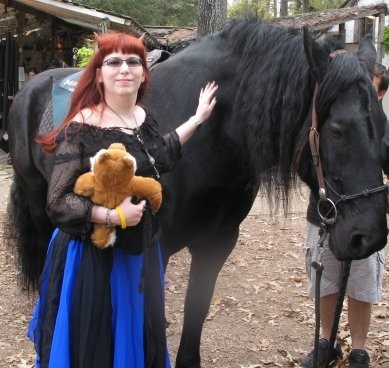 The Wife With One F with Sampson in 2010
Photo by Jef Rouner
Despite having the blood of conquerors, Sampson was renowned at the grounds for his patience and love of visitors. On his first night at the fair, Lorio and her ground crew stood ready in case he was spooked by the fireworks shows, only to watch him calmly continue eating dinner through the explosions. Lorio’s favorite thing to see was the eyes of little girls grow big as she handled her massive friend and hearing them tell her they wanted to do the same when they grew up. He had a special passion for visitors with special needs and took extra special care to not cause injury when they came by.

“Whenever he saw a person with special needs, he would just plant those big hooves and remain stock still,” says Lorio. I remember once there was a bus group of people, and there was this gentleman who just fell in love with Sampson. He stayed with us the whole time and learned to teach other people how to pet Sam.”

That’s not to say Sampson was always stoic. Lorio very much enjoyed dressing him up in livery, especially for Christmas, which she sewed herself. At one point, she also taught him to dance to the music of Tartanic as he strolled through the ground. His love for children also once cost him a job with the Alpha & Omega Mounted Patrol.

“He was supposed to not react to stimulus,” says Lorio. “Umbrellas, toy laser pistols, he did all that fine. But then they wheeled out a baby carriage. He couldn’t help it. When he sees those at faire, that means he’s going to get to be petted by kids.”

The war horse’s career ended in 2018. By then he had already had one gut surgery that had taken a toll on his health, though he rallied well afterwards. In 2019, he miraculously survived a horse trailer accident with no injuries when he rolled into the grass on the side of the highway. Sadly, an impacted gut earlier this year left Lorio with the choice of more surgery or letting her friend go.

The difficulty of the surgical recovery on the now-elderly horse and the resulting risk of founder decided the issue. Sampson, the one-of-a-kind equestrian star, was gone. He passed away quietly “in the company of his girls” according to Lorio. He will be deeply missed, both by Lorio and by the throngs of people who fell in love with him, including this reporter. There is simply a bit less magic and wonder in the world for his loss.

Read Lorio’s remembrances of Sampson on her blog.
KEEP THE HOUSTON PRESS FREE... Since we started the Houston Press, it has been defined as the free, independent voice of Houston, and we'd like to keep it that way. With local media under siege, it's more important than ever for us to rally support behind funding our local journalism. You can help by participating in our "I Support" program, allowing us to keep offering readers access to our incisive coverage of local news, food and culture with no paywalls.
Make a one-time donation today for as little as $1.