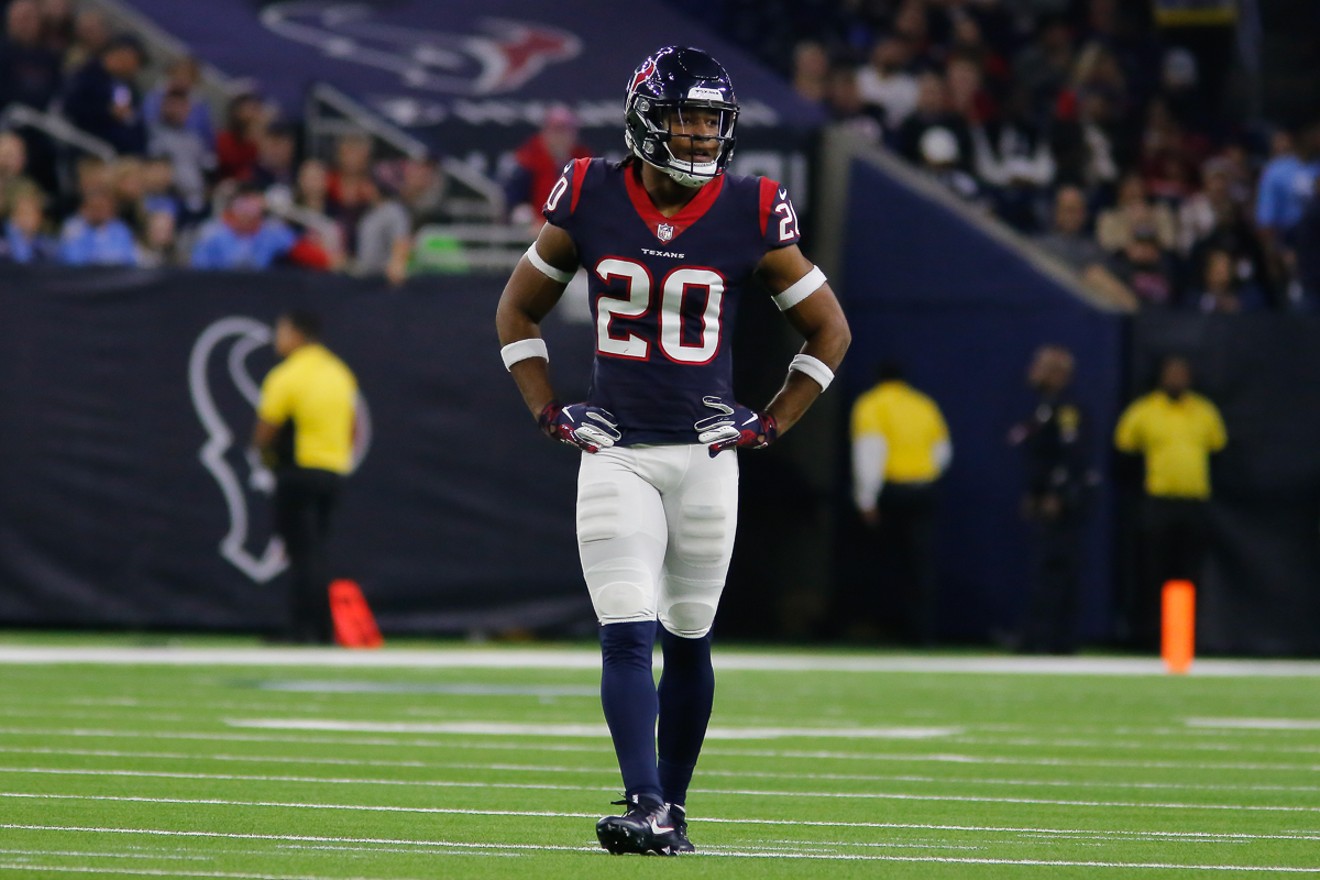 Justin Reid leads a secondary with a number of new faces in 2019. Photo by Eric Sauseda
On Sunday, after another sweltering morning of practice for his squad, Houston Texans head coach Bill O'Brien met with the media to give his daily state of the union on this year's version of the team. With several positions up for grabs, and a handful of players still trying to get healthy, I asked him about the player evaluation process and just how much of that process we, in the media, see out at practice each day. Here's what he had to say:

"A lot of what you see out here is definitely a big part – how they can take the information from the meeting room to the jog-through and execute it on the practice field, because we do a lot on both sides of the ball. We don't really know what Romeo (Crennel) is going to do from day to day. We have an idea, and he doesn't really know what we're going to do, so how do they take the meeting room philosophies and apply them to the field? That's big. But then on the inside, are they showing up on time? I mean, they all show up on time, but are they showing up earlier to take care of their bodies, study more, watch tape? Are they staying a little bit later to figure something out that maybe didn't go well? How well do they pick up things in the meetings? Do they ask good questions or are they asking the same question every time? There's a lot of evaluation that takes place inside, probably just as much as what takes place on the practice field."

So with that in mind, in a world where, according to O'Brien, we are publicly witnessing about half of what goes into evaluation these 90 players, here is my latest prediction at a 53 man roster for the 2019 Houston Texans:

THE VETERAN and DRAFT PICK LOCKS

QUARTERBACK (2): Deshaun Watson, A.J. McCarron
McCarron has been dealing with a hand injury he suffered in Green Bay during the practice sessions up there. The team brought in rookie QB Jordan Ta'amu, but the upside for him is that he shows enough to MAYBE make the practice squad. McCarron should be back for Week 1.

RUNNING BACK (2): Lamar Miller, Duke Johnson
My, how things can change in a couple weeks! D'Onta Foreman was in this spot last time we did this prediction. Well, he got waived, and now Duke Johnson is a Houston Texan. Life comes at your pretty fast!

WIDE RECEIVER (3): DeAndre Hopkins, Will Fuller, Keke Coutee
The only thing to keep an eye on here is Keke Coutee's leg injury he suffered in the Green Bay game. Reports are that it's not serious, but I'm a little triggered when it comes to Coutee and nagging lower extremity injuries. Sue me.

TIGHT END (3): Jordan Akins, Jordan Thomas, Darren Fells
Jordan Thomas was back on the practice field yesterday, after about a week or so of nursing some sort of injury. Akins has looked very solid in the passing game, and Fells is going to make the team on the strength of his blocking, largely because the other tight ends aren't great blockers, and unfortunately neither is the starting left tackle.

OFFENSIVE LINE (5): Tytus Howard, Zach Fulton, Nick Martin, Max Scharping, Seantrel Henderson
The big swap out here from last prediction column — Seantrel Henderson, who's been a fixture starting at right tackle, is in, and Martinas Rankin is out. (Spoiler alert — Rankin is ALL the way out. I don't have him making the 53 man roster. My compass is off when it comes to him.)

SPECIALISTS (2): Jon Weeks, Ka'imi Fairbairn
Again, these are easy picks. There is only one long snapper and one kicker in camp, and it's these two guys.

Okay, so before we start shopping from the training-camp bubble to fill out the 53-man roster, here's where we are:

35. Damarea Crockett, RB
With Foreman gone, and with Duke Johnson being more fo a receiving threat out of the backfield, there are carries to be had for some aspiring running back. I'd love to see either Crockett or Karan Higdon land that spot. Thus far, Crockett has been the more impressive of the two rookie running backs carrying the football.

36. DeAndre Carter, WR
37. Stevie Mitchell, WR
Carter has looked very spry at practice since returning from the PUP list this week, and his experience, both in the return game and in backing up Coutee in the slot, is crucial. Mitchell has been the most consistent catcher of the football among a group that includes Vyncint Smith, Johnnie Dixon, Tyron Johnson, and Jester Weah all vying for the fifth wide receiver spot.

38. Greg Mancz, G/C
39. Julien Davenport, T
40. Matt Kalil, T
41. Senio Kelemete, G
Mancz was injured in the Packer game, so we will wait and see on him. Kalil has been abjectly terrible over the last week and should be concerned about the rapidly improving Roderick Johnson taking his spot. For now, I'll keep the veteran Kalil on the roster, but it wouldn't shock me if the next iteration of the roster prediction had some shuffling on the offensive line.

42. Carlos Watkins, DE
43. Charles Omenihu, DE
Watkins has been banged up, but is still in line to make the team. The rookie Omenihu has flashed in camp.

53. Kahale Warring, TE
With Foreman now gone, Warring moves up to the top of the list of players O'Brien routinely expresses disgust over during camp. He finally got back on the field at practice in Green Bay, only to miss the game on Thursday, and sit out the last couple practices. The rookie from San Diego State is trending toward being an injured reserve stash, especially with the numbers at tight end, but for now, I'll keep him on the 53.