Giving Thanks to the Worst Team in the NFL 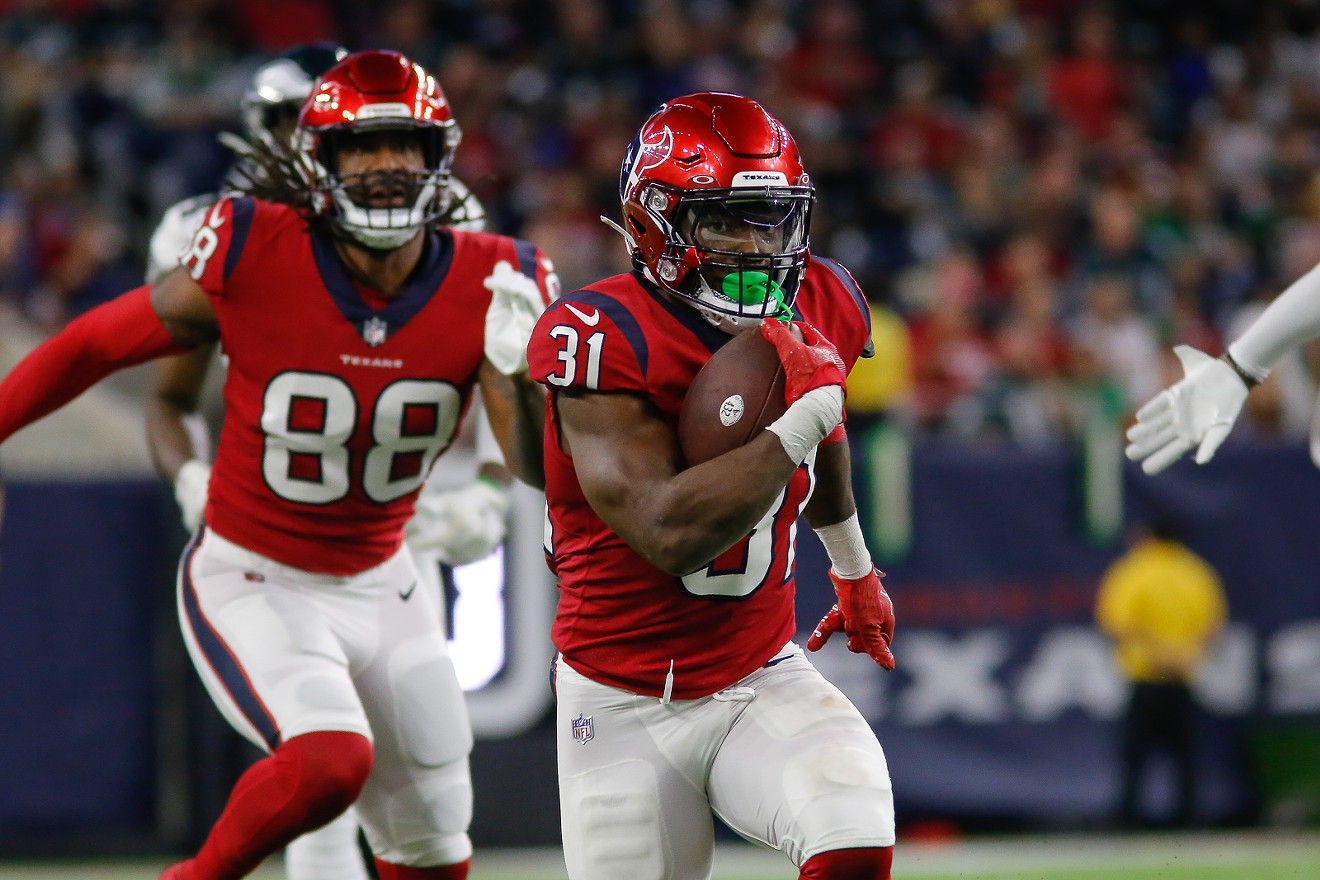 Red helmets and Dameon Pierce! Two reasons to be thankful this holiday season. photo by Eric Sauseda
It's been  long season for Houston Texans fans in 2022. In a season where the oddsmakers had the Texans at a forecasted league low of 4.5 wins, the team has managed to significantly underwhelm even against that low threshold. They have one win on the season, nine wins over the last three years, and if the Jacksonville Jaguars didn't exist, they'd have just four wins since 2019.

Still, I choose to be a "glass half full" guy, and on this glorious day of gratitude, I have several reasons why I am thankful for the 2022 Houston Texans, by record the worst team in the National Football League. Here we go:

6. Brandin Cooks drama
Cooks signed an extension before the season, back in April, and it was a pretty healthy one — two years, $36 million guaranteed. When asked about why he signed the deal with a rebuilding team like the Texans, Cooks said all the right things — he loves the culture, he loves Nick Caserio, he loves everything! Then, during the bye week and just before the trade deadline, the Texans fired Cooks' dear friend and Texans EVP Jack Easterby. All of a sudden, Cooks went total EMO, got surly, and when Caserio opted NOT to trade him away, he tweeted:


Don’t take a man’s kindness for granted. Covered for the lies for too long those days are done. Crossed the line with playing with my career 🏹

Now, Cooks and the Texans are stuck in a drama-laden, dysfunctional marriage, which for those of us in the content generation business for a 1-8-1 team is music to our ears!

5. Lovie Smith's prickly side
The preseason for the Texans was one big Love-fest (no pun intended). Their new head coach, Lovie Smith, was a kind, white-bearded old soul from Big Sandy, Texas. Now that the team is 1-8-1 with no noticeable signs of improvement, that gentle feather pillow of a man is now testy as hell!


Oh this is ROUGH pic.twitter.com/jBnrJfdKEf

Lovie may need to slow down. He's got seven more games left. Or he might spontaneously combust by Christmas.

4. Draft day anticipation
For about two thirds of the league, the regular season is still a source of intrigue for the month of January, with visions of playoff football dancing in their heads. Then there is the rest of the league, of which the Texans are at the very bottom, where fans have generally turned the page to next April's NFL Draft. In all honesty, no city should be more excited for April than Houston. Right now, the Texans would be picking first in the draft (hello, new QB!) and the first round pick they received in the Deshaun Watson trade is trending very well, too. Right now, it's the seventh pick in the draft. Again, just seven more games, and then it's DRAFT SEASON, BABY!

3. Easterby fired!
If some day a book of Houston sports history is written, and there is a chapter on the most destructive individuals in said history, Jack Easterby should get main event billing. The former New England team chaplain managed to charm his way into a position with the Texans where he was either running or attempting to run every facet of the organization. During Easterby's reign of terror, good people were run off or left voluntarily because the atmosphere was so toxic, which is odd considering Easterby's job description included fostering the team's culture. Thankfully, Cal McNair FINALLY ended things in October.

2. The domination over the Jaguars
Sure, it's nice to have the first pick in the draft, but it's also nice to win a game every now and then, and as long as the Jacksonville Jaguars exist, the Texans should have at least two wins on the schedule. Since 2019, the Texans have won nine games, and five of them are over the Jags, against whom they have a nine game winning streak. This season, the Jags represent the Texans' sole victory. Remember this?


Texans RB Dameon Pierce had 17 broken tackles Vs the Jags yesterday which is the most in NFL History pic.twitter.com/D4XVXuqMS7

Which brings us to the final Texans 2022 person or thing for which I am thankful...

1. Dameon Pierce
This young man is a gem of a human being, a battering ram of a running back, and most Sundays, he's the only good reason to spend three hours of your valuable time watching the Houston Texans. Put him in the Ring of Honor right now!