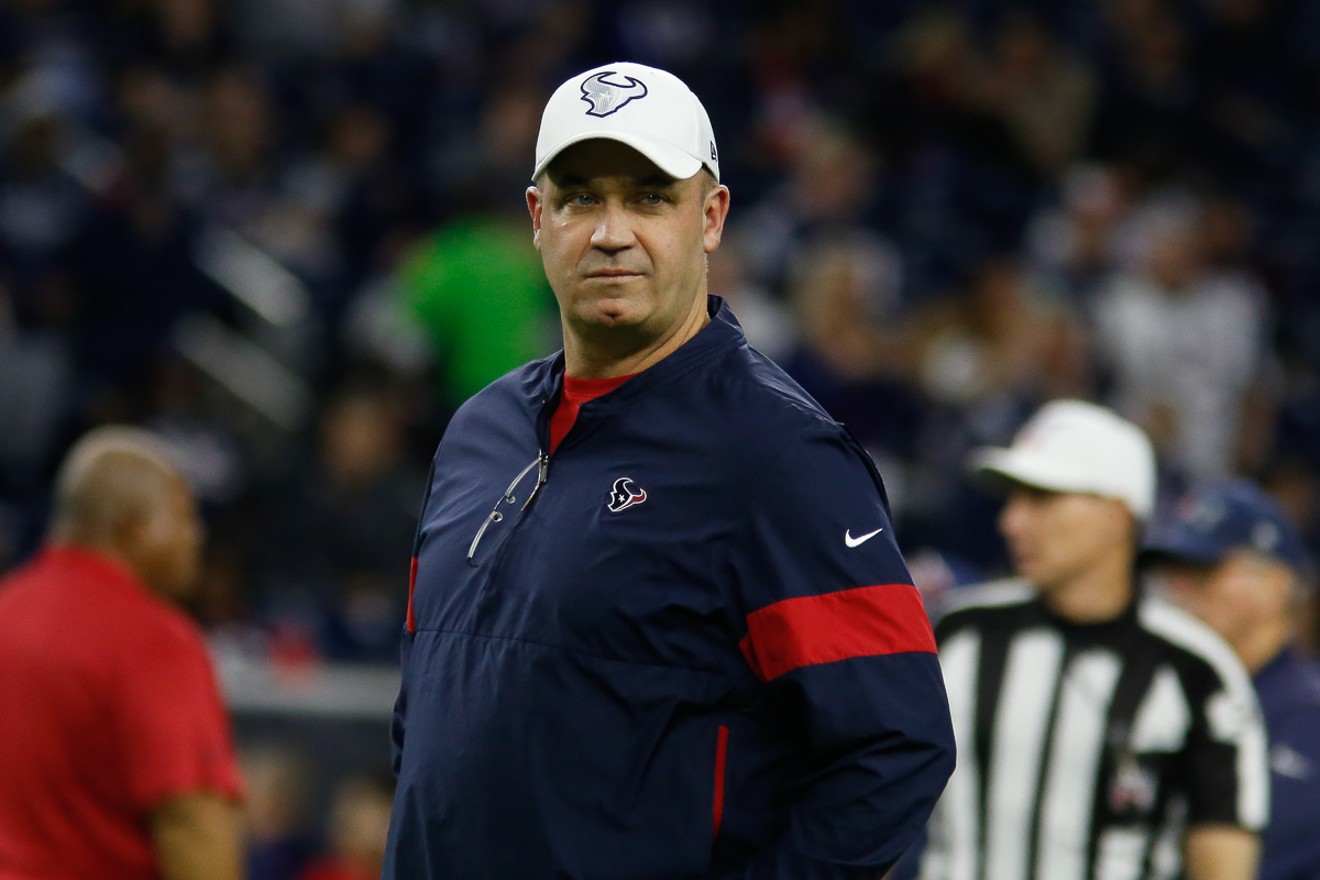 Could Bill O'Brien have one more big deal left in him? Photo by Eric Sauseda
Bill O'Brien, in his general manager role for the Houston Texans, likes to make deals. He is always looking at any way he can to make the team better, even if his evaluation of what that entails may skew wildly — like, WILDLY — from what Texan fans think is even sane (see: Hopkins, DeAndre). I'm not going out on a big limb here — Bill O'Brien is not a "stand pat" guy.

So anytime the name of an NFL star player who may be available comes up, prepare yourselves, Texan fans. Your team is going to be mentioned as one of the suitors. It's a lock, because the belief around football is that O'Brien can't help himself. He will either trade too much capital away for a big star, or he will trade a big star for too little capital ("too much" or "too little" being in the eye of the beholder, of course). History tells us this.

So on Friday, this little bit of news came down regarding New York Jets safety Jamal Adams, one of the best young players in the game, drafted sixth overall in 2017, the same draft in which the Texans selected Deshaun Watson:

The Jets-Jamal Adams situation continues to deteriorate. Adams informed the team he wants to be traded, a source tells ESPN. #Jets


WOW, right? Star player available! Hey, not just that, but check out this follow up report from ESPN.com's Adam Schefter:


DOUBLE WOW! A star player who actually has the Texans on his short list of desired destinations! Pretty cool, especially because it kind of disproves any myth out there that players don't want to play for Bill O'Brien.  There's only one problem — there is NO chance that Adams is a Houston Texan when (If? Hashtag COVID-19?) they take the field for the 2020 regular season opener. None. Zero. Zilch.

And here are four reasons why...

So exactly what would they trade the Jets for Adams?
Let's start there. Getting Adams is going to require several moving parts to come into synch, and the biggest one is putting a trade package together that the Jets find enticing enough to bite on. Bill O'Brien has shown that he's not afraid to do construct such a package. I mean, he did give up two first round picks and a second round pick for Laremy Tunsil. The problem here is that the Texans would have to start dipping into the 2022 draft to even begin putting a package together (their first selection in 2021 is in the third round), and reportedly, if the Jets are going to move Adams, they want to bring back a king's ransom. Also, before you start naming off players the Texans can trade for Adams, there is nobody the Texans are willing to move that the Jets would want in a deal. The Texans aren't trading anything worthwhile whose departure actually weakens them offensively (Tytus Howard comes to mind), and there is nothing on the defensive side they'd be willing to move in a deal for Adams (no, people, Bernardrick McKinney has no value to the Jets, sorry). So that's problem number one — not enough assets to pull it off.

The Texans are rapidly running out of salary cap space
Problem number two — Adams is going to want a new contract, at some point. Maybe not the day he arrives, but this spat with the Jets started because he wants a new deal, so it would be coming. The top end of the safety market is at around $14 million per year right now. Adams is going to want, I would assume, at least $15 million per year. Maybe more. With the Texans trying to lock up Deshaun Watson to a huge extension (likely in the $40 million per year range), and with the cap possibly going DOWN next season because of revenue lost to COVID-19 issues, $15 million annually for Adams on a long term deal(and trading draft capital for the right to pay him) is not in the cards.

The safety position doesn't fit into O'Brien's hierarchy of "top of market" salaries
So I know what some of you are saying now — "But Sean, O'Brien did just THAT with Tunsil, traded major draft capital to have to play him an exorbitant contract after the 2019 season ended." Yes, he did do that. However, if you've listened to O'Brien's press conferences, or anytime he's discussed cap management, he and Jack Easterby have a clear hierarchy of positions they will pay top of market to on long-term deals, and it goes like this — franchise quarterback, franchise left tackle, J.J. Watt (or elite edge rusher), cover cornerback. After that, they are shopping in the middle class and bargain bin for other positions for anything beyond one year deals. Safety is not a fit in this pecking order. I know what some of you are saying as a follow up — "But Sean, O'Brien wanted to pay Tyrann Mathieu $14 million per year, and Brian Gaine let him walk." Indeed, and that was in a world where Deshaun Watson was entering Year 3 of his rookie deal and Laremy Tunsil was a Miami Dolphin. It's new rules now. It's not 2019 anymore. Priorities must be set and adhered to.

They already have Justin Reid as their foundational safety
The good news for the Texans, and another reason why Adams isn't really a fit in my mind, is because the Texans already have Justin Reid on the roster as a likely safety that they will pay good money for on a second contract. If O'Brien is going to go top of market for players outside of the "elite position hierarchy," then it's going to be extending guys who've been in the Texans' locker room for a few years, not an unknown in free agency or a possibly draft-and-cap-crippling trade. Reid is a guy that has foundational player potential, and he is going into this season fully healthy, unlike 2019. Adams and Reid would be a dynamic duo, but the redundancy and potential cost for both down the road don't add up.