St. Luke's spells out the number of things it won't do in regards to women's health. Photo by Gary Beaver
A woman who was seeking gynecological care at the Baylor St. Luke’s Medical Group – Caritas Women’s Care facility in Sugar Land was stunned when a form (see below) told her it was a “pro-life” facility that wouldn’t provide “medically indicated” abortions, hormonal birth control, or in-vitro fertilization.

“Seeing this makes me feel like they don’t have women’s health as a priority,” she says. “It feels like they want to do less than the absolute bare minimum and if any serious OBGYN medical complications arise then you’re on your own. I can’t trust them because of this, and trust is the core relationship between a patient and a doctor.”

Among the services that are prohibited at the facility are “birth control pills, patches, rings, injections, intrauterine devices, barrier devices, and/or sterilization (i.e. “tubal ligation).” The form also states that St. Luke’s does not make referrals for these procedures, including for “medically indicated” abortions.

A “medically indicated” abortion is one that is performed when there is significant risk to the life of the pregnant person. For example, an ectopic pregnancy is when a fetus grows somewhere other than the uterus, such as in the fallopian tubes. Medical science cannot replant the fetus elsewhere and carrying the pregnancy to term in such a condition is nearly always fatal because of the rupturing of internal structures. The lack of specific provisions for such a pregnancy in the most recent anti-abortion law passed by the Texas legislature last year is one of the strongest criticisms of religion-based anti-reproductive choice initiatives that have become increasingly popular with Texas conservatives.

The form is also in direct conflict with statements from St. Luke’s itself. Spokesman Scott Packard says that St. Luke’s will perform abortions for emergency medical reasons.

“When a patient is seeking a service that we do not offer, our call center staff works to transition the patient to a provider in the community where they can receive the services they need,” he says. “When a pregnant woman’s health is at risk, emergency care is always provided at our care sites, even if it results in the end of a pregnancy.” 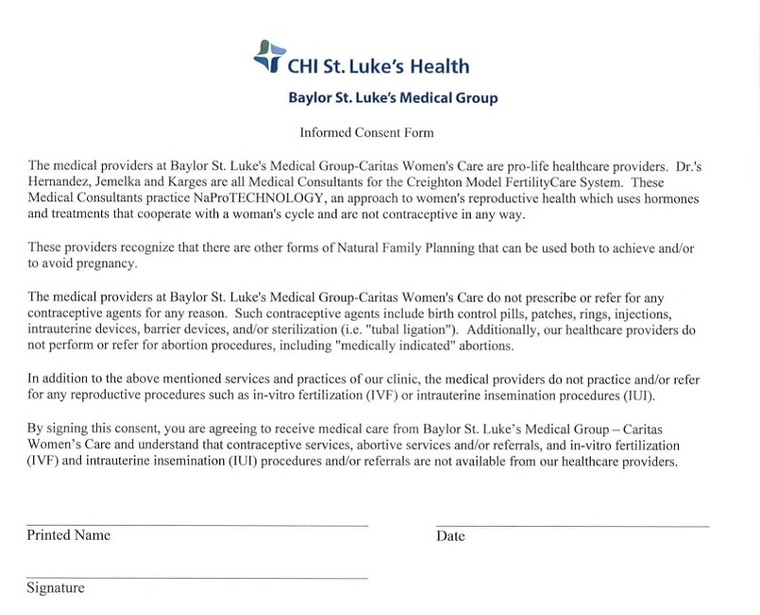 It is also strange that the St. Luke’s form states they will not prescribe hormonal birth control when such treatments often serve as methods for preserving fertility. Birth control bills are commonly used to fight polycystic ovarian syndrome (PCS) and endometriosis, painful conditions of the reproductive system that are among the leading causes of infertility. Despite the form, Packard claims St. Luke’s will prescribe birth control as long as it is for non-contraceptive reasons.

“Our providers may prescribe all appropriate medications, though medications are not prescribed for solely contraceptive purposes,” he says.

Among the “elective” procedures addressed by Packard is in-vitro fertilization (IVF).

"Our Catholic faith calls us to respect all stages of life from conception to natural death. As a result, we do not provide a small number of services at our facilities, including elective abortions, elective procedures for the primary purpose of sterilization such as tubal ligations or hysterectomies, and in-vitro fertilization," Packard said.

Though less prominent as a talking point, IVF is essentially impossible using the framework that life begins at conception. The process usually involves fertilizing as many eggs as possible before implantation, and it’s common for people using the procedure to not use every fertilized embryo. The unwanted ones are preserved, discarded, or donated.

Instead, St. Luke’s promotes the Creighton Model FertilityCare System, a calendar-based method that measures vaginal mucus to determine the most fertile days in a cycle. The method was developed by the Pope Paul VI Institute, a Catholic reproductive clinic. Only a handful of observational studies have been done on its effectiveness.

It’s also strange that St. Luke’s would refer to a hysterectomy as “elective.” The compete removal of the uterus and sometimes all other internal reproductive organs are major surgeries that are not undertaken lightly. It is only used in cases of severe medical distress, such as cancer or other conditions that seriously hamper a patient’s quality of life.

St. Luke’s move to a “pro-life” mindset occurred in 2013 when the hospital system was sold by the Episcopal Health System to Catholic Health Initiatives for $1 billion. This happened during a massive expansion of Catholic healthcare systems following the passage of the Affordable Care Act. The ten largest Catholic health systems increased in capacity by 50 percent over the last decade.

As this was happening, Catholic organizations went to war over provisions in the Affordable Care Act that mandated employees receive health insurance that covered birth control. The result was a major backlash from Catholic health systems that has consistently left medical professionals conflicted over religious restrictions on care. Confusing battles between what Catholic leadership prefers and what evidence-based medical practice dictates has led to situations like this one where patients receive conflicting and potentially deadly information.

“This method of treatment is extremely unsafe and without the proper medical aids to prevent at risk pregnancy Texas forces us to carry to term,” says the woman who sent the Houston Press the form. “It should be every doctor’s oath to fully care for their patients to keep them safe and CHI St. Luke’s isn’t doing that for women."
KEEP THE HOUSTON PRESS FREE... Since we started the Houston Press, it has been defined as the free, independent voice of Houston, and we'd like to keep it that way. With local media under siege, it's more important than ever for us to rally support behind funding our local journalism. You can help by participating in our "I Support" program, allowing us to keep offering readers access to our incisive coverage of local news, food and culture with no paywalls.
Make a one-time donation today for as little as $1.