The Texans have a big decision to make with Jadeveon Clowney in the offseason. Photo by Eric Sauseda
After an eventful 2018 in Houston sports, 2019 promises a lot of uncertainty along with endless possibilities. There will be player moves and postseason runs. There will be difficult decisions to make and all kinds of ups and downs. Undoubtedly, there will be some bitter disappointment. This is Houston sports we're talking about.

But, here are the storylines that stick out for us in 2019.

What will the Texans do about Jadeveon Clowney?

Pardon us for skipping over the entire playoffs, which will obviously be the first huge sports story of the new year in Houston, but the Texans face a pretty significant decision with their All-Pro outside linebacker. Clowney will become an unrestricted free agent after this season because he could not come to an agreement on an extension with the Texans prior to the start of the regular season. Clowney has, once again, been healthy this year. He has also put up similar numbers to last year, was picked for the Pro Bowl and is poised to go into double digits in sacks.

On the open market, he will likely command a contract in the range of what Khalil Mack got from Chicago. But is Clowney truly worth that amount? Given the Texans' legitimate concerns, it would not come as a shock to anyone if they used the franchise tag to keep their star pass rusher in Houston at least one more season before deciding what to do long term. But, that decision will loom large over the off-season.

Will the Astros solidify their starting pitching rotation?

Last year, the Astros had the best pitching staff in baseball. The good news is the one-two punch of Justin Verlander and Gerrit Cole will be back. The bad news is no one else will. Dallas Keuchel turned down the Astros' qualifying offer and will ultimately sign elsewhere. Charlie Morton signed with Tampa Bay. And Lance McCullers, Jr. is going to miss the entire 2019 season after surgery on his throwing arm. Given the fact that Verlander and Cole will both be free agents after 2019, most assumed pitching would be a priority in the off-season. Yet, they haven't signed anyone as of yet.

They do have Colin McHugh, who was fantastic in the bullpen last season, as a possible fourth option in the rotation. They also have youngsters like lefty Framber Valdez, flame-throwing righty Josh James and the No. 2  prospect in their minor league system Forest Whitley. But with their title aspirations, our guess is they make a move for at least one veteran to shore up what was a dominant staff last season. 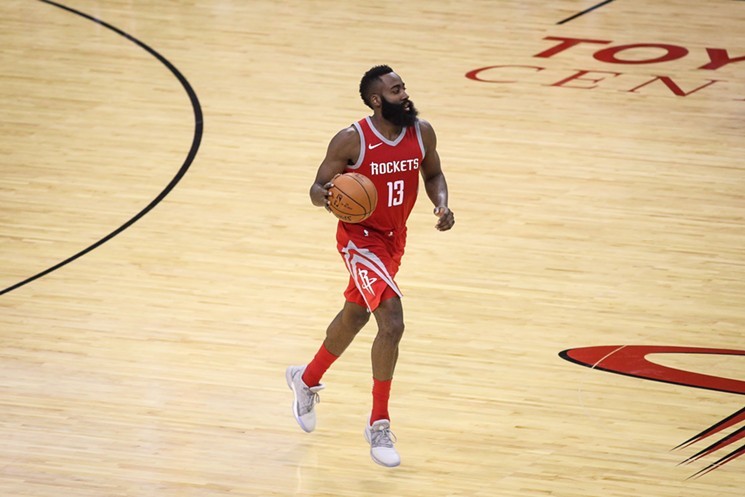 If the Rockets are going to make it back into a deep playoff run, James Harden will have to lead them.
Photo by Eric Sauseda
How far can the UH men's team go this year?

Don't look now, but the Cougars are a thing. As of writing this, the team was 12-0 and ranked 22nd in the latest poll. The new Fertitta Center is a gem of a building on campus and the Coogs are taking full advantage. There hasn't been this much excitement around the team since the '80s. There is still a long way to go and they haven't exactly played a murderer's row of opponents, but this is a team that has the kind of skillset that could serve them well in the NCAA Tournament.

Rarely has Houston, an extremely tepid college sports town already, had much to cheer about when March Madness rolls around. Last year, UH gave us a taste, but it could get even better in 2019.

Can the Rockets ultimately right the ship?

After their win on Christmas Day over the Thunder, the Rockets had won seven of eight games and climbed into the seventh spot in the West, only a game-and-a-half out of fourth place. They are surging at a time when much of the conference is struggling and the Western Conference is remarkably wide open this year with really only Phoenix with little to no chance of challenging for the playoffs.

Unfortunately, their awful start left them in a pretty deep hole and injury problems for Chris Paul and James Ennis haven't helped. But with very little buzz, James Harden is putting up MVP-like numbers yet again and Clint Capela is an All Star. If they can get contributions from the somewhat rag-tag band of bench players, find a way to get Eric Gordon back on track from the three point line, and maybe find an additional piece before the trading deadline, there is no reason to think they couldn't be back challenging for home court in the playoffs. But that is still a lot of ifs.

Is there a legitimate shot the NHL will finally wind up in Houston?

For years, hockey fans in Houston suffered without a professional team. And before you go scoffing at hockey in a hot weather climate, the Aeros had a rabid fan base for many years. But, there was little chance of landing an NHL franchise because former Rockets owner Les Alexander was not well liked by the league and the NHL, like the NBA, favors owners who own their buildings. But all that has changed with Tilman Fertitta taking over.

Fertitta seems to have a good rapport with NHL commish Gary Bettman and has been very open about his interest in acquiring either a new or existing franchise. The former won't happen because Seattle was just awarded the 32nd NFL team. However, with realignment moving the Phoenix Coyotes into the Central Division away from their geographic rivals, and the franchise already struggling, a move to Houston could be in the cards, maybe as soon as next season since the Coyote's lease expires after this one. Fingers crossed.
KEEP THE HOUSTON PRESS FREE... Since we started the Houston Press, it has been defined as the free, independent voice of Houston, and we'd like to keep it that way. With local media under siege, it's more important than ever for us to rally support behind funding our local journalism. You can help by participating in our "I Support" program, allowing us to keep offering readers access to our incisive coverage of local news, food and culture with no paywalls.
Make a one-time donation today for as little as $1.