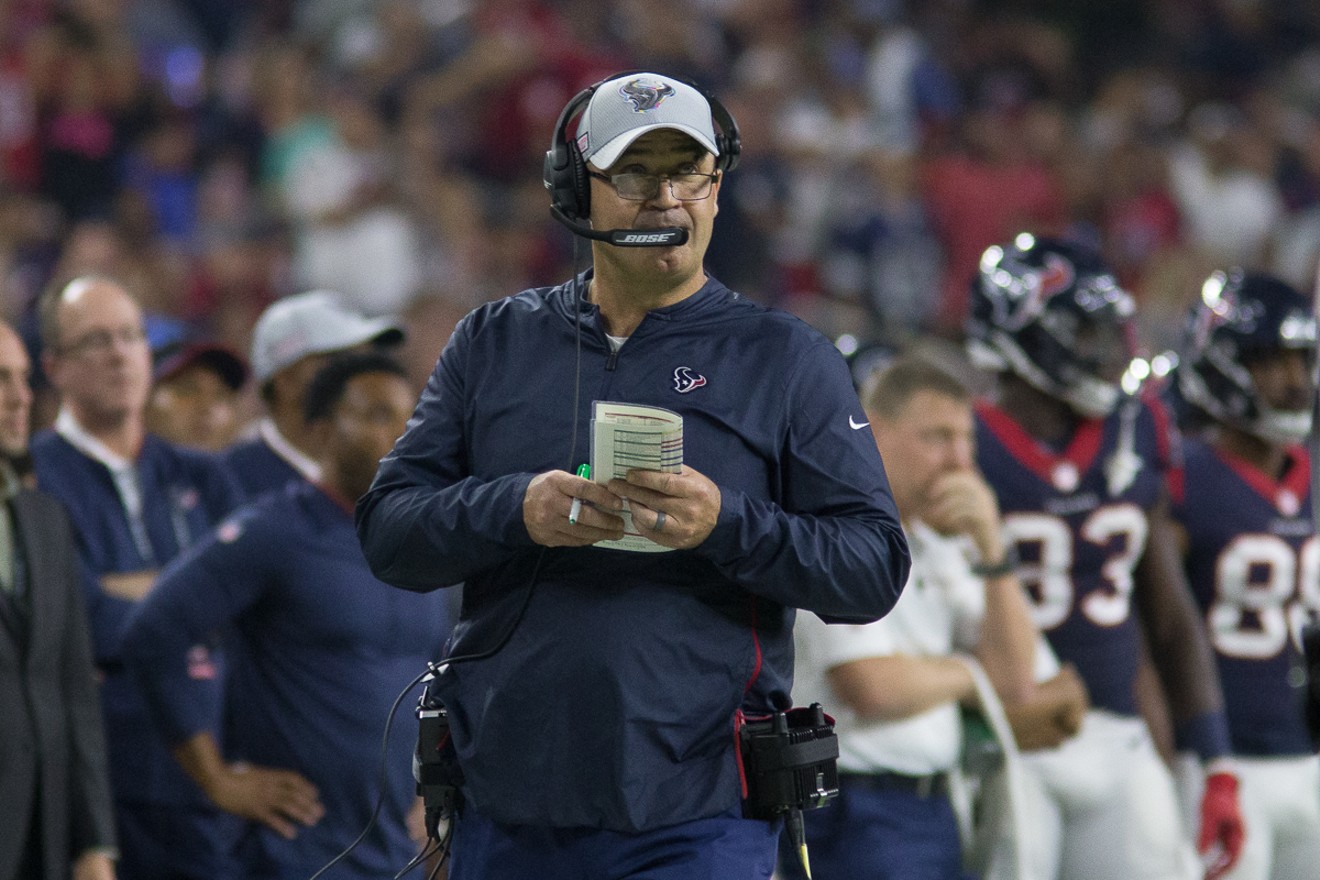 With no GM by his side, Bill O'Brien will have more say than ever over the final roster this season. Photo by Eric Sauseda
Amidst the return fo the sweltering Houston humidity over this past weekend and on Monday morning, the Houston Texans wrapped up their first five practices of the preseason. On Tuesday, the players will get a day of rest, while the coaches will gather at NRG Stadium to begin sifting through the 90 man roster and start to formulate some level of direction toward identifying the 53 men who will travel to New Orleans in Week 1 of the regular season.

As we do in this space each year, I will take multiple cracks along the way at trying to predict what the 53-man roster is going to look like heading into the regular season. My predictions are based on a few things — what I've seen out at camp, what the hiring practices have looked like in previous seasons, and good ol' gut feel. So, without further ado, here is my first version of the Texans' 2019 53-man roster:

THE VETERAN and DRAFT PICK LOCKS

QUARTERBACK (2): Deshaun Watson, A.J. McCarron
These are easy. Deshaun Watson is the future of this franchise, and a year or two away from becoming one of (if not THE) highest paid players in football. McCarron appears, so far, to be an upgrade over Brandon Weeden at the backup spot. He's looked sharp through the first few practices.

RUNNING BACK (2): Lamar Miller, D'Onta Foreman
Through five practices, Lamar Miller is firmly in front of a pack of young running backs to, once again, be the starter for the Texans. It's a contract year for Miller, so he's hoping for big things. D'Onta Foreman is a lock to make the team but, reading Bill O'Brien in press conferences the last few days, it appears Foreman may have forfeited some of the goodwill he banked in getting back into shape in the offseason. Pass protection deficiencies are the root cause. The best case for the Texans has Miller and Foreman being close to 50/50 in splitting carries, but they're not there right now.

WIDE RECEIVER (3): DeAndre Hopkins, Will Fuller, Keke Coutee
If healthy, this is one of the top wide receiver trios in the entire sport. Hopkins is the best in the league, and the best player on this team. Fuller and Coutee both look fully recovered from injury-plagued 2018 seasons. These three healthy should keep opposing defensive coordinators up nights.

TIGHT END (2): Jordan Akins, Jordan Thomas
Thomas has been banged up the last few days, but Akins has been a shining star in camp, thus far. These two are both locks to make the team, and another reason to be very excited about the offense this season.

OFFENSIVE LINE (5): Tytus Howard, Zach Fulton, Nick Martin, Martinas Rankin, Max Scharping
I think this is the fewest offensive line locks that we've ever had in a 53-man forecast, and I've been doing these for several years now. Howard and Scharping are highly drafted rookies, and Howard, in particular, looks like an immediate contributor. Martin has yet to practice, but draws praise every time O'Brien is asked about him. Fulton is the one consistent, healthy veteran, and Rankin, who struggled as a rookie, is still a second year player with upside.

DEFENSIVE LINE (4): J.J. Watt, D.J. Reader, Angelo Blackson, Brandon Dunn
Pretty easy group to nail down. Watt is back to being one of the best in the game. Reader may get a contract extension before the start of the season. Blackson just got a deal this past offseason. Finally, Dunn is the locker room DJ — you ALWAYS keep the locker room DJ! (He's also a solid run stopper.)

OUTSIDE LINEBACKER (3): Whitney Mercilus, Jadeveon Clowney, Brennan Scarlett
Mercilus and Clowney are obvious ones, and Scarlett was a versatile backup last year, playing both inside and outside in a pinch. He's been called a "fabric type player" by O'Brien, which is the highest praise for a non-star in the Bill O'Brien lexicon.

INSIDE LINEBACKER (3): Bernardrick McKinney, Zac Cunningham, Dylan Cole
One of the easiest positions to forecast the locks. Onto the next one....

CORNERBACK (4): Aaron Colvin, Johnathan Joseph, Bradley Roby, Lonnie Johnson
This is a "make or break" group, considering the opposing quarterbacks on the schedule. Colvin MUST recover from a disastrous 2018 debut season with the Texans. Joseph and Roby are forecasted as the starters right now and, if they can get contributions from Johnson, that would be really helpful.

SAFETY (3): Justin Reid, Tashaun Gipson, Jahleel Addae
Another very solid group. Reid is a future foundation piece for this team. Gipson would still be with the Jaguars if they hadn't managed their salary cap like a college freshman with a credit card for the first time. Addae is a solid third safety.

Okay, so before we start shopping from the training-camp bubble to fill out the 53-man roster, here's where we are:

34. Josh Ferguson, RB
The team needs a third down, and O'Brien has brought up Ferguson's name as someone who's really impressed the staff. So, for now, he is that guy, with Taiwan Jones and Karan Higdon making some noise behind him.

35. Vyncint Smith, WR
The gaggle of first and second year receivers in camp are feeding one of the more underrated position battles. For now, Smith has the leg up, having made the team as an undrafted rookie in 2018.

36. Darren Fells, TE
37. Kahale Warring, TE
I have all four tight ends — Thomas, Akins, Fells, Warring — making the team, but O'Brien's frustration over Warring's inability to get on the field due to injury is very evident. I think the favorite right now is Warring makes the team, but I smell an injured reserve stash as a possibility.

38. Matt Kalil, T
39. Seantrel Henderson, T
40. Greg Mancz, G/C
41. Julien Davenport, T
I can see any of these four guys getting cut, and I could see at least three of them possibly starting. I have no idea what that says about the personnel decisions along the offensive line, but my arm is involuntarily reaching for a bottle of whiskey.

(NOTE: An earlier version of this prediction had Senio Kelemete in, and no Davenport. That was a writer oversight that's been corrected. Davenport in, Kelemete out.)

42. Carlos Watkins, DE
43. Charles Omenihu, DE
These two round out the defensive line. Watkins is heading into his third year, hoping to make a leap, and Omenihu is a very interesting fifth round rookie, who led the Big XII in sacks last season.

So here are the numbers now:

47. Buddy Howell, RB/ST
48. A.J. Moore, S/ST
49. Cullen Gillaspia, FB/ST
50. Joe Webb, QB/ST
51. Johnson Bademosi, CB/ST
These are all players whose primary roles are going to be running down on special teams, and whose secondary roles will be to provide depth on their respective areas of the depth chart. Which brings us to the battle at punter....

52. Trevor Daniel, P
Tough to glean much about punters when it's not real game action, but I'll take Daniel over Bryan Anger right now. Anger has looked a tad shaky, but this one still has more twists and turns to come.

Okay, now down to the last spot... and it's for the fifth WR spot. DeAndre Carter is your backup slot receiver and kick returner, but he's still on the PUP list. Tyron Johnson, undrafted rookie out of Oklahoma State, has been making PLAYS (and has some spectacular short shorts, which is a sign of confidence!) For now....

53 . DeAndre Carter, WR/KR
... you keep your job, but you better get healthy. The youngsters are comin'!