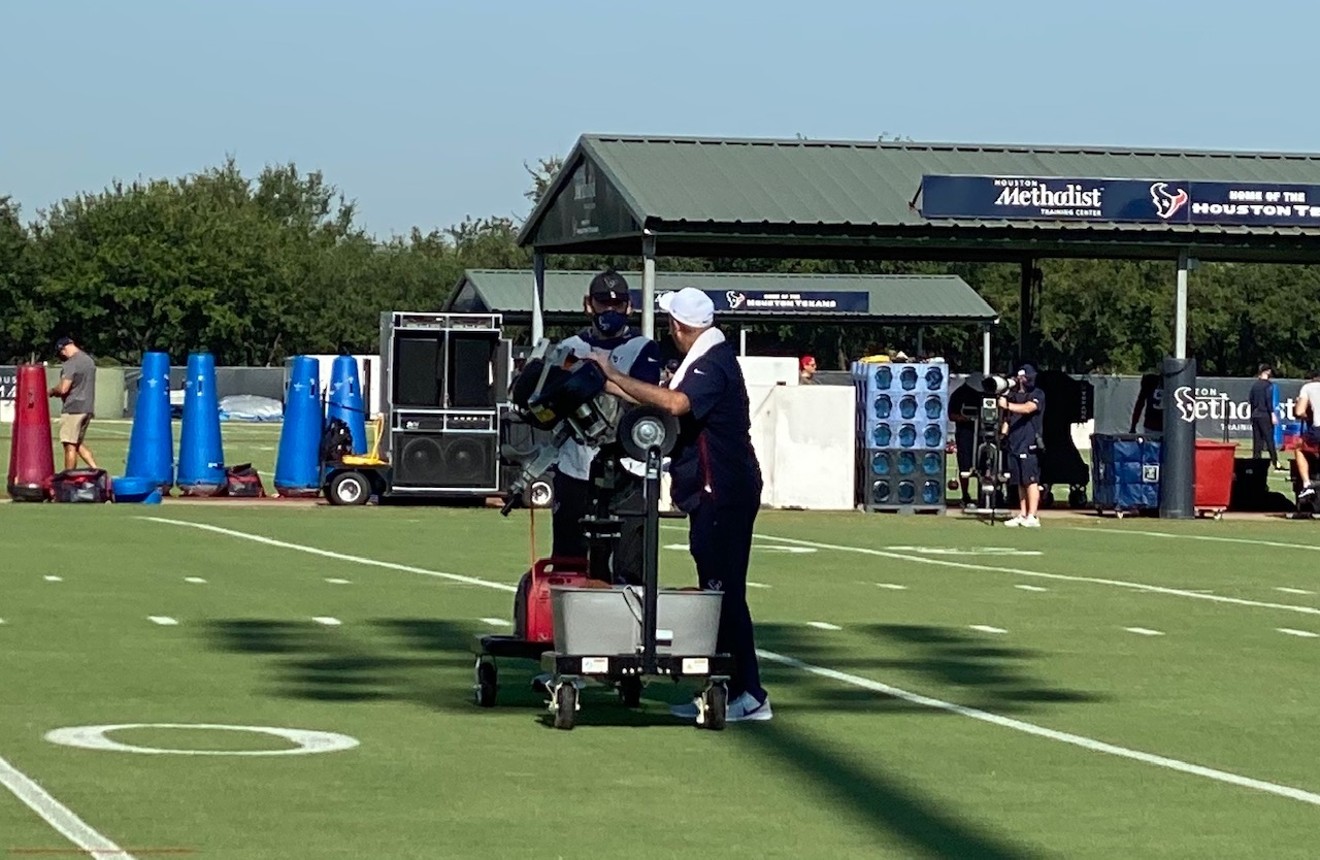 Bill O'Brien observing his team before practice, likely pondering some tough roster decisions. Photo by Sean Pendergast
The Houston Texans finished up the portion of training camp that was open to the media — ten media members total, ten practices total — with a scrimmage inside NRG Stadium on Thursday night, that hung precariously in the balance over the previous 24 hours. As it turned out, Hurricane Laura shifted to the east overnight and the Texan players opted not to make a social justice statement (like nine other NFL teams did by canceling practice on Thursday), and they moved ahead with the scrimmage as planned.

Yes, you read that right — a scrimmage was nearly cancelled over two different possible circumstances and NEITHER was the coronavirus. There's 2020 in a nutshell for you. So now, with four practices to go, Bill O'Brien will soon need to identify his 53 man roster for Week 1 in Kansas City. If the season were to start this weekend, here is my predicted 53, with some comments:

QUARTERBACK (2): Deshaun Watson, A.J. McCarron
These are easy choices, although the Texans did have QB Cody Kessler in for a tryout this week, and it should be noted that McCarron has been abysmal in training camp, thus far. Worth watching.

RUNNING BACK (3): David Johnson, Duke Johnson, Buddy Howell
Howell moves to a "LOCK" status this week after O'Brien had this to say about his preseason, and status as the third running back:


“I’d say I think Buddy is right there right now. I think again, special teams comes into play there. Taiwan Jones was an excellent kick coverage guy. He could cover punts. He was a really good gunner. He covered kickoffs. He could come off and play some running back for us. Buddy is a different type of player, but a really good special teams player, too in his own right. So that’s really what that position is.”

TIGHT END (2): Darren Fells, Jordan Akins
These two are way out in front of Jordan Thomas and Kahale Warring. Akins, in particular, has been one of the shining stars of training camp.

LINEBACKER (7): Bernardrick McKinney, Zach Cunningham, Whitney Mercilus, Brennan Scarlett, Jacob Martin, Jonathan Greenard, Dylan Cole
In the last version, I accidentally left out Dylan Cole, because he was on the PUP list at the time. He has not been doing much in camp, as he recovers from an ACL tear, but I can't imagine he won't make the team.

CORNERBACK (5): Bradley Roby, Garen Conley, Lonnie Johnson, John Reid, Keion Crossen
The rookie Reid has been singled out as the best rookie in camp thus far by multiple folks. As someone who has been at every practice, I can tell you that the fourth rounder out of Penn State has looked very capable.

SPECIALISTS (3): Jon Weeks, Brad Anger, Ka'imi Fairbairn
There is literally no competition in camp for any of these three guys. Injury would be the only thing that changes this part of the dance card.

OK, here is the tally of locks to make the team:

So we need 11 more players.

43. Cullen Gillaspia, FB
44. Peter Kalambayi, LB
These are both core special teamers, but Gillaspia has only been involved in one practice, where he tweaked a knee, and he's been in shorts and t-shirt ever since. I could see him going on IR for a period of time.

45. Jordan Thomas, TE
Thomas was looking very good at the beginning of camp, but has had a few drops in 11-on-11 drills, and one on third down on Thursday night. Still, he is well head of Warring.

46. Roderick Johnson, T
47. Charlie Heck, T
Heck will make the team because he was a fourth round pick, but he's looked a little overwhelmed in camp, thus far, possibly necessitating another veteran at tackle on the roster.

48. Carlos Watkins, DL
Watkins is in the final year of his rookie deal, and has done some good things in camp so far.

49. DeAndre Carter, KR/Slot WR
With Keke Coutee nursing a foot injury, Carter has seized control of the return spot and he has had several really good reps as a second string slot receiver. He's played some crucial downs for this team over the last two seasons, and the coaches are confident in his ability.

50. Vernon Hargreaves, CB
51. Isaiah Coulter, WR
52. Kahale Warring, TE
53. P.J. Hall, DL
I don't know if I'm super excited about any of these guys, but Hargreaves and Hall are former first and second round picks, who the team may still think they can football-rehab. Coulter is a fifth round rookie with some real tools, and yes, I'll put Warring in here for now, but was tempted to keep one more offensive lineman, possibly Gerald Hawkins at tackle.