Deshaun Watson's running led the Texans to a win on Sunday. Photo by Eric Sauseda
In a performance that was part affirmation of Deshaun Watson as the unquestionable cornerstone of the Texans' franchise and part affirmation that the Jacksonville Jaguars, offensively at least, are an inept dumpster fire, the Houston Texans defeated the Jags by a score of 20-3 to clinch their third AFC South division title in the last four seasons, coming all the way back from an 0-3 start to the season to secure the 3-seed in the AFC.

The Texans will play the Indianapolis Colts at 3:35 p.m. Saturday at NRG Stadium, a time slot in which the Texans have played every one of the four wild card round games in the team's history. There will be time to preview and analyze that game throughout the week. For now, let's look back at winners and losers from a game the Texans absolutely had to have yesterday...

Watson led the Texans with 66 yards rushing.
Photo by Eric Sauseda
4. Deshaun Watson
It goes without saying that the Texans will go as far as Deshaun Watson will take them this postseason, but on Sunday, we got a glimpse as to exactly HOW he will take them however far they end up going. Left with a rushing attack that's been impotent over the last three weeks, Bill O'Brien decided to go with a far more Watson-run heavy playbook on Sunday, and for the fourth straight game Watson was the team's leading rusher. However, unlike the last three games, in which Watson's production on the ground was largely through scrambles and improv, on Sunday 11 of his 13 rushing plays were designed runs or run-pass options. Watson was his usual efficient self through the air, too, going 25 of 35 through the air for 234 yards.

3. Trevor Daniel
We haven't spent much time in this space talking about Daniel this season. He's been fairly solid, with the occasional shanked punt mixed in. Certainly, there is reason to be optimistic about him and Ka'imi Fairbairn as this team's kicking and punting tandem. On Sunday, in a game where burying the Jags with poor field position would be a big ingredient in crushing their soul, Daniel dropped four punts inside the Jacksonville 11 yard line, including a 60 yard punt to the Jags' 3 yard line with the Texans up 10-3, field position that led to the Jags punting the ball back to the Texans, and the Texans scoring their second touchdown on the next possession to make the margin an insurmountable 17-3 lead.

Hopkins tied Andre Johnson's singe season reception mark with 115 catches.
Photo by Eric Sauseda
2. DeAndre Hopkins
If you watched Hopkins between plays on Sunday, he was clearly banged up, running somewhat gingerly back to the huddle each time. However, in between snaps and whistles, he was what he's been all season — the best wide receiver on the planet. On Sunday, Hopkins set a single game personal high with 12 catches, allowing him to tie Andre Johnson for the single season team record with 115 catches. Watson targeted Hopkins on 16 of his 35 attempts, an astoundingly (and necessarily) lopsided 46 percent of throws. Any Texans playoff run will require peak-level Hopkins, a concern since their next opponent, the Colts, may have done the best job all season of removing Hopkins from the game a few weeks, when he had just four catches for 36 yards.

O'Brien was using a "must win" playbook on Sunday.
Photo by Eric Sauseda
1. Bill O'Brien (first three quarters)
As the Texans built a 17-3 lead in the first half on Sunday, I really liked what Bill O'Brien was doing on offense. Perhaps realizing that this ground game isn't going to get fixed by just pounding Lamar Miller and Alfred Blue repeatedly into the back of his offensive linemen, O'Brien went with some play calls that had a "must win" feel to them, using Watson repeatedly on designed runs and run-pass options that he had been avoiding heavy usage of since Watson's collapsed lung in Week 5. The Texans needed this game like they will need every playoff game, and O'Brien handled it that way. I liked it a lot, until.....

4. Bill O'Brien (questionable fourth quarter)
....up 17-3, with about 12 minutes to go, 1st and goal with the ball at the Jags' 5 yard line, rather than run the ball, burn some clock, and come away with either a touchdown or field goal to go up three scores, O'Brien threw three passes, all incomplete. The Texans burned a total of 22 seconds. After kicking the field goal to go up 20-3, on the next possession, O'Brien had Watson throw two passes, both incomplete, and the Texans burned just one minute of clock on a three and out. On the final 14 play possession to end the game, O'Brien had Watson drop back five times and run the ball twice. This whole chunk of the game seemed very risky, with Watson's heavy usage and the Texans controlling the game with a three score lead. Perhaps the reason was to allow Watson to build some chemistry with numerous untested receivers in game situations, or put more thing on film for the Colts to prepare for. Either way, O'Brien got away with it. It was just very odd to see Mr. Run Heavy Head Coach tossing the ball all over the place up 20-3 in the fourth quarter against a completely inept offensive team with no prayer of coming back. 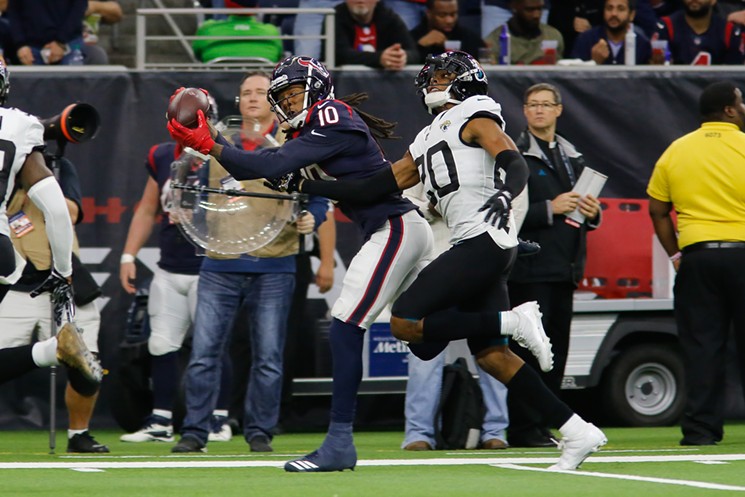 It was a long day for Ramsey covering Hopkins.
Photo by Eric Sauseda
3. Jalen Ramsey
In a GQ article this past summer, Ramsey took dead aim at about two dozen different NFL players, mostly quarterbacks, talking about what "trash" they were, or identifying their flaws. It was awesome content if you're a radio host, but if you're anyone close to Ramsey, or Ramsey himself, it's a fairly embarrassing read now. Don't get me wrong, Ramsey is still a great player, although Hopkins chargrilled him on Sunday (12 catches, 147 yards), but when you're openly disrespecting half the league in an article, you might want to be ABSOLUTELY sure you're on a team that will finish better than 5-11. Also, make sure you're QB is someone better than....

Blake Bortles is awful, absolutely awful.
Photo by Eric Sauseda
2. Blake Bortles
My God, is he awful. 15 of 28, 106 yards, a wretched 3.8 parts per attempt. Somehow, Doug Marrone, Dave Caldwell, and Tom Coughlin (the Jags' braintrust) all thought it was a good idea to sign him to an extension this past offseason, and pass on drafting Lamar Jackson with the 26th pick in the draft. Worth noting, Jags owner Shad Khan plans on keeping Marrone, Caldwell, and Coughlin around for another year. Yes, this is the same group that chose to stick with Bortles, pass on drafting Pat Mahomes or Deshaun Watson, and instead draft....

1. Leonard Fournette
.....with the fourth overall pick in the 2017 draft. Fournette was last seen yesterday, inactive due to (yet another) injury, sulking on the bench with T.J. Yeldon all game long, and getting the guarantees in his rookie contract nullified because of his suspension for fighting in the Buffalo game earlier this season. Tom Coughlin called Fournette's act on Sunday "disrespectful" and "selfish," adding that his and Yeldon's behavior was "unbecoming of a professional football player." Solid choice with the fourth overall pick there, boys!