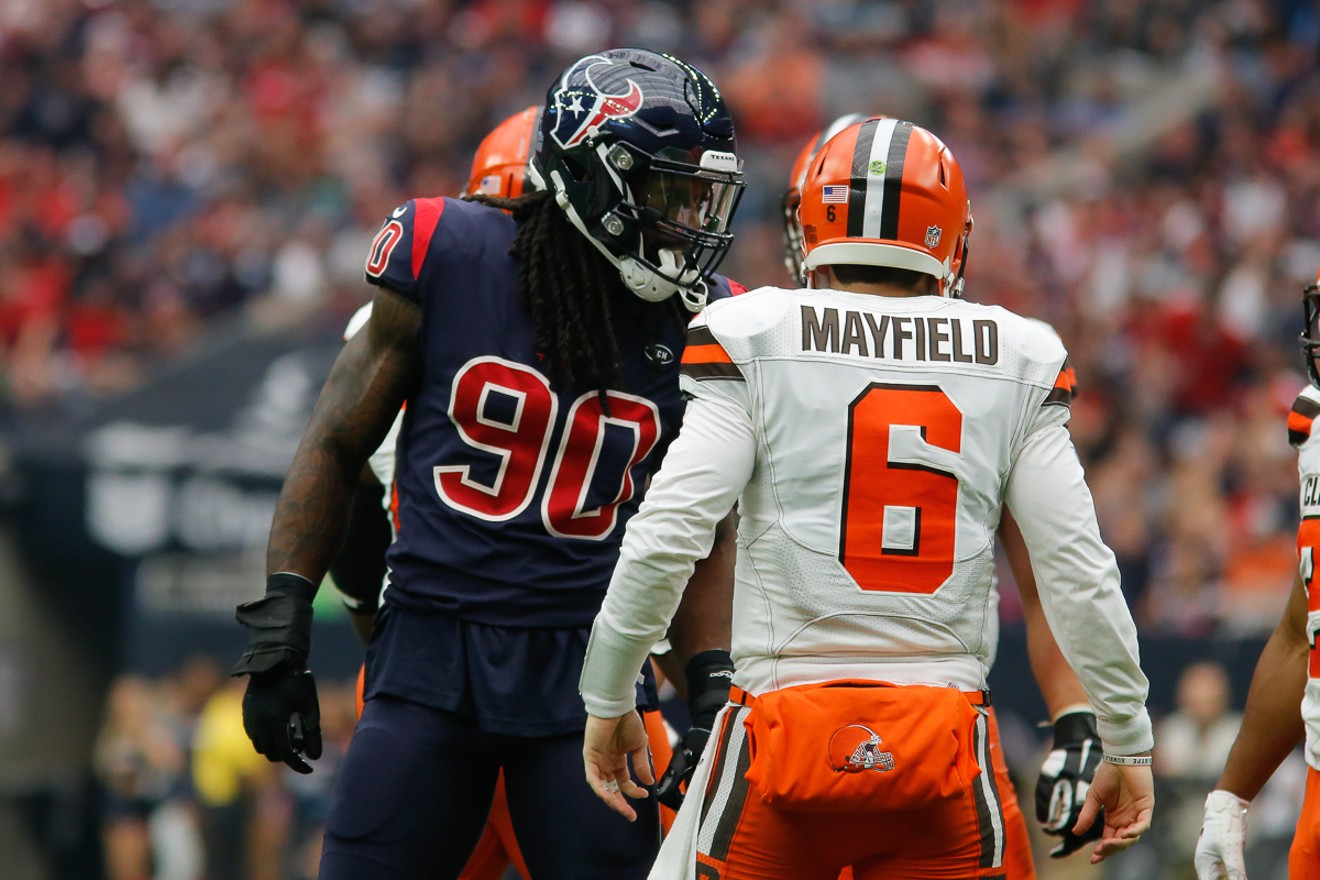 In 2019, the oddsmakers see the Texans and Browns standing toe to toe. Photo by Eric Sauseda
This time a year ago, the Houston Texans were one of the bigger mysteries in the National Football League. Deshaun Watson's season had ended with an ACL tear after six scintillating starts, J.J. Watt's future was very much up in the air, and the dust was just settling on Bill O'Brien's turf win against Rick Smith.

As the 2018 offseason unfolded, however, the Texans gradually became a somewhat chic pick to make some noise in the AFC, and became a dark horse to win the Super Bowl. At one point over the summer, despite a 4-12 finish amidst a sea of injuries in 2017, the Texans had the third shortest odds to win the AFC, behind only the Patriots and the Steelers.

So, fast forward to this week. If you had told me before the season that, in 2018, the Texans would finish 11-5, break the franchise record for longest winning streak, and win the AFC South, yet the oddsmakers' faith in them would go DOWN, I'd have thought you were slightly off kilter. Not CRAZY, but I'd have been mildly surprised.

Yet, that's where we are. Per Will Brinson of NFL.com, SuperBook USA has put out their first set of odds on which NFL team will win the 2020 Super Bowl, a year and two weeks from now. Here you go:

Ok, here are my observations on this latest set of odds for next season's Super Bowl:

The Texans are bunched in with a bunch of non-playoff teams (and the Seahawks).
Whereas in 2018, the Texans at their "odds board apex" had just two AFC teams in front of them, now they have six, which is telling for a team that finished the 2018 season as the AFC's 3-seed. The oddsmakers essentially think that the Texans' 2018 season was a little phony. Also, they could be factoring in the difficulty of the Texans' 2019 schedule, which includes a murderer's row of quarterbacks from the AFC West and NFC South, as well as Tom Brady (again). I can easily sum things up for the layperson out there by saying that the Texans now have the same odds as the Cleveland Browns, an indicator that progress MUST be made. (Looking at you, Brian Gaine! Big offseason... BIG offseason.)

They must think the Jaguars are getting a quarterback.
I'm fine with the Texans having similar odds to the 10-6 Seahawks. (Hell, can you imagine just two years ago saying that the Texans and Seahawks were viewed similarly? Would've been a huge compliment.) I'm even OK with being grouped with the Falcons and the Browns, two teams that were a few plays away from being playoff teams. However, the oddsmakers need to slow their roll on the Jaguars, who finished 5-11, and will either be starting a rookie or "non Philly" Nick Foles at quarterback. I mean, the Texans DID beat them by a combined 40-10 score last season.

We can see how the odds on winning the AFC South are going to look.
Not only are the Texans the seventh highest rated team in the AFC, but they are no longer atop the AFC South. The Colts' 9-1 stretch of football to close out the regular seasons, along with their dominant wild card win in Houston, were enough to make them a 20-1 play to win next season's Super Bowl, grouping them with the Eagles, Ravens, and Cowboys, all teams that either won their division, won a playoff game, or both in 2018. The window of irrelevance for the Colts slammed shut pretty quickly. They are back. Sucks for us.

The four teams remaining this weekend are the four favorites for next season.
No surprise here — in a postseason that may have been the most emphatic validation in the history of the playoffs that the four teams with a first round bye DESERVED their first round byes, those same four teams are the favorites headed into next season. Of course, there's just as good a chance that one of these teams will miss the playoffs as there is one of them winning the Super Bowl. Think about it — the top four teams after last season were the Eagles, Vikings, Patriots, and Jaguars. Two of those teams missed the playoffs, the Eagles needed help just to get to 9-7 and grab a wild card, and even the Patriots were sitting in the 3-seed with two games to go. Of the top four teams here, my pick for next season to miss the playoffs? The Rams. Jared Goff is clearly the black sheep of the four quarterbacks, their defense wasn't that great this season, and this blind faith in anything having to do with Sean McVay feels like a phenomenon that cold turn into one giant "I told you so" for skeptics who (correctly, in my opinion) think this feels like a "dot com bubble."

The oddsmakers KNOW the Dolphins are tanking in 2019.
There are, no doubt, some bad teams in the NFL, and it appears that SuperBook USA has chosen to just go ahead and make them all 100-1 shots to win the Super Bowl. All EXCEPT the Miami Dolphins, who they've made an outlying and astounding 300-1 shot! Obviously, the good folks at the SuperBook USA have been reading up on the Dolphins' eyeing the 2020 QB draft class as their avenue for football salvation. That's 15 months from now, and THAT, my friends, is code for "we are TANKING for a high draft pick this coming season." We see you working, Dolphins, and so do the oddsmakers.