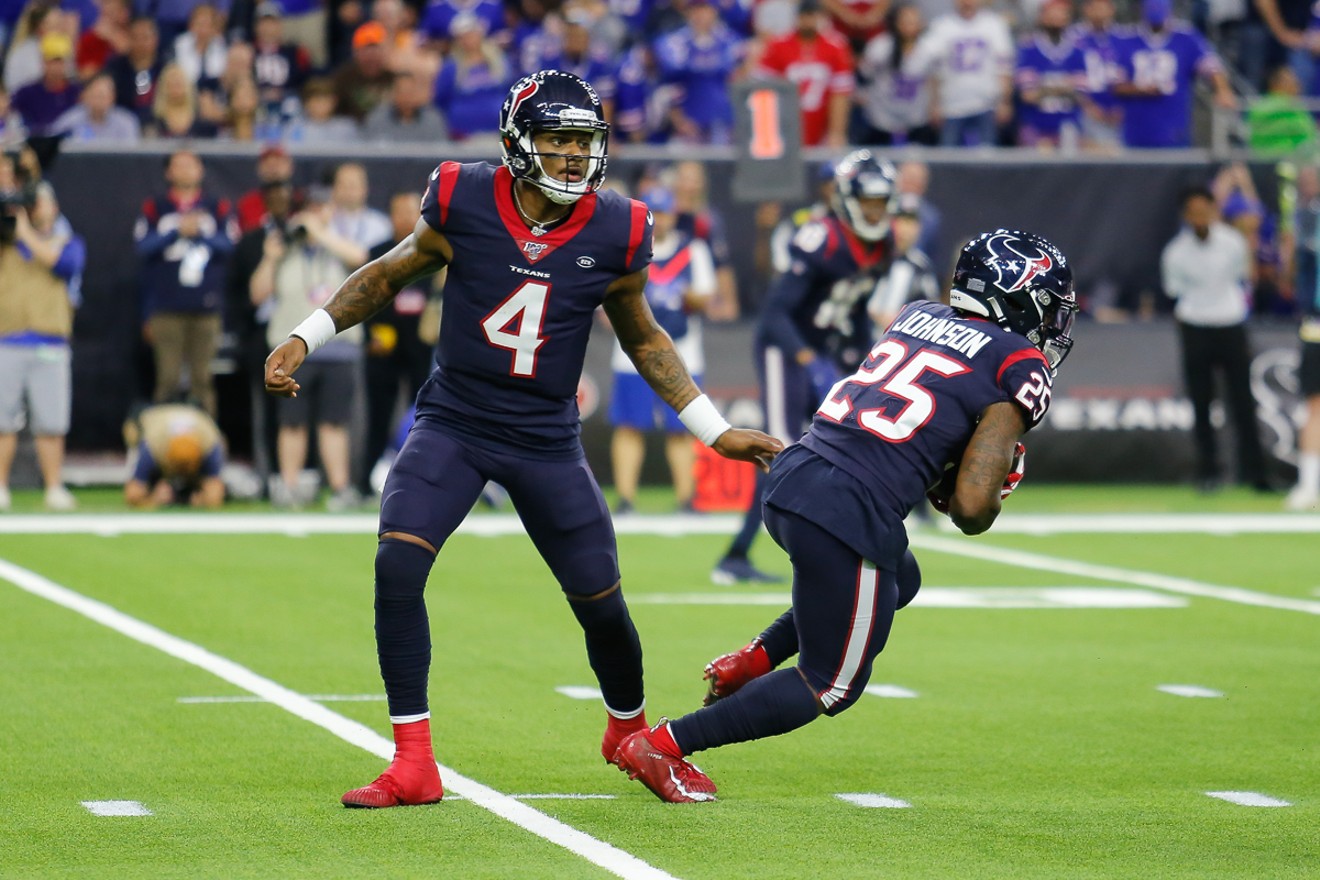 Deshaun Watson will continue handing off to Duke Johnson, if OC Tim Kelly has his way. Photo by Eric Sauseda
A win over the Patriots last Sunday sent the Texans into Thanksgiving week feeling good about their general direction, but with only a few days to get ready for the next contest, a Thanksgiving Day (actually, Thanksgiving MORNING, Houston time, 11:30 a.m. CT kickoff) game in Detroit to face the Lions. As an NFC foe, the Lions only face the Texans once every four years, and only once every EIGHT years in Detroit.

The last time the Texans travelled to Detroit for a regular season game was in 2012, also played on Thanksgiving. On that day, the Texans ran their record to 10-1 on the season, behind 315 yards passing from Matt Schaub, 102 yards rushing from Arian Foster, and 188 yards receiving from Andre Johnson. (My eyes got misty just typing that sentence. Those stats!)

A scant few players are still around on either of these teams from that game that day. J.J. Watt, Whitney Mercilus, and Jon Weeks for the Texans. Matt Stafford for the Lions. Most of all, the Texans are a country mile from being a 10-1 team (and the favorite to win the Super Bowl at that point in 2012) right now. They're 3-7 and trying to just keep these good vibes going week to week.

They're actually favored today in Detroit, the rare 3-7 road favorite at this point in the season. So while the turkey cooks, and the pumpkin pie bakes, let's get you ready for this game today. Here are four things to watch for:

4. Matt Patricia, dead man walking
Like the Texans under Bill O'Brien replacing Gary Kubiak, the Detroit Lions replaced a very popular head coach (in their case, it was Jim Caldwell) daydreaming of creating a "New England Patriot" satellite campus with former Pats defensive coordinator Matt Patricia, and like practically every branch that's fallen off the Belichick coaching tree into a head coaching job, Patricia has been a failure. O'Brien, at least, won some games and a few divisional crowns. Patricia has been an abject disaster in every way — statistically, socially, aesthetically. He is awful. Watch this hypocrite, who looks like he gets his clothes out of the hamper to dress each day, critique the posture of a media member:


Patricia's ample seat is heating up, to the point where he is having to address it in press conferences:

"I mean, look, our focus right now is on Houston,” Patricia said, via Dave Birkett of the Detroit Free Press. “Any conversations that I’ve had with ownership, I always keep those private, you guys know that. So from that standpoint, we’ve just got a quick turnaround here, trying to get ready for Houston.”


Right now, Patricia is the betting favorite to be the next NFL head coach fired. Here's hoping the Texans are the ones to push the Ford family to undo a decision that never should have happened in the first place when they hired this clown.

3. Deshaun Watson, Player of the Week (again)
In the midst of team failure, Deshaun Watson has been awesome this season, and the powers that be who dole out the hardware for Players of the Week took notice (again) this week, giving Watson the AFC Offensive Player of the Week for his 344-yard performance against the Patriots on Sunday. It's the fifth time he's won that honor, in just 47 career starts. So basically, once every ten times Watson has set foot on an NFL field, he's been the best player in the conference that week. He also became the second highest rated passer in league history this past weekend (for passers with at least 1,500 career attempts:

Bottom line — Deshaun Watson makes this a very desirable job for a future GM and future head coach, and the nation should get a nice show today for Thanksgiving.

2. Next man (and next man after that) up
The Texans had done a nice job avoiding the injury bug for most of the season, but in the last couple weeks, the medical situation has regressed to the mean, especially in the wide receiving corp. Coming into the season, the biggest medical concerns were Will Fuller avoiding soft tissue ailments and Brandin Cooks avoiding concussions. Ironically, they go into this Week 12 game with both Fuller and Cooks having played in every game this season, and Randall Cobb and Kenny Stills both injured. This means Keke Coutee is all the way back to being the third receiver (it's like 2018 all over again!), and we MAY get our first look at rookie WR Isaiah Coulter, who's been either injured or inactive all season.

1. Highly resistible force meets the ultra movable object
The story of this game will ultimately be decided by which bottom-three-in-the-league rushing unit can do its job the least poorly. The Lions and Texans are both among the worst teams in the league at running the football on offense, and stopping the run on defense. If you're a wrestling fan, you remember Gorilla Monsoon calling Hulk Hogan versus Andre the Giant "the irresistible force meeting the immovable object", right?

If you're a Texan fan who is hoping they just start slinging the ball around with Deshaun Watson passing every single down, you got another thing coming, according to OC Tim Kelly:

"I think that's a death wish if you do that," offensive coordinator Tim Kelly said. "When you're going against players that – think about trying to block a guy like J.J. Watt 70 times a game and he knows you're throwing the ball 70 times a game. You've got no shot. I don't care who you are. Those players are too dynamic, they're too good to not have to worry about playing multiple games."


So eschewing the running game is a "death wish," eh? I think Duke Johnson might beg to differ.