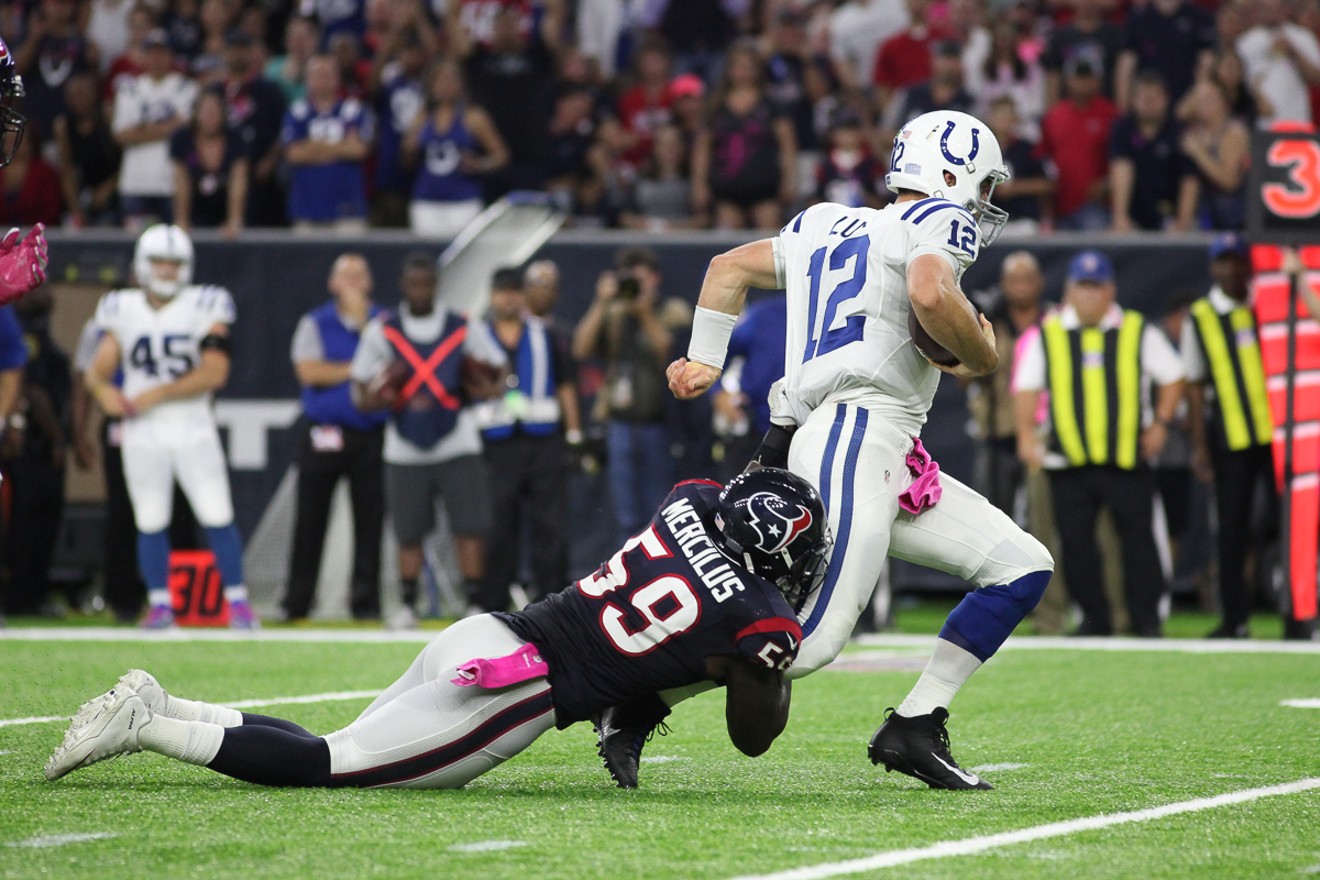 Mercilus and others chasing down Andre Luck will be a key to victory on Sunday. Photo by Eric Sauseda
This is a big week for the Luck family — XFL commissioner Oliver and his son, Indianapolis Colts quarterback Andrew — having some sort of effect on the city of Houston. On Wednesday afternoon, Oliver Luck announced that Houston, along with seven other major cities in our country, will be getting a franchise in the eight-team reboot of Vince McMahon's XFL.

You’re in luck. The XFL chose Houston as one of eight cities for franchises in its new league and has announced the team will play at TDECU Stadium on the @UHouston campus! pic.twitter.com/LtuwCu261J

The other seven cities, in case you want to begin planning your XFL road trips for 2020, the year in which the XFL will have its on-field launch, are New York, Los Angeles, Seattle, St. Louis, Tampa, Washington D.C., and Dallas (woo hoo, a Texas pro football rivalry where the teams will meet more than once every presidential term!)

As someone who loves football and gambling on football — Luck made it clear that, unlike the NFL, the XFL plans to embrace the wagering movement afoot in America now — I will be watching these XFL games. As a wrestling fan, I am very happy that this iteration of XFL football will not be embracing the wrestling-style storylines of the previous version from back in the early 2000s. Let's stay out of each other's lanes, football and rasslin', OK?

For now, though, there is the gold standard of pro football, the NFL, on which to focus, and in that brand of ball, the Houston Texans are, far and away, the hottest team in the league right now, having won nine in a row. (Next closest, as it turns out? Dallas, with four wins in a row.) The streak began with the Indianapolis Colts, and Andrew Luck, all the way back in Week 4, when Frank Reich's controversial decision to go for it on 4th and 4 in overtime on the Colts' side of the 50-yard line, set the stage for an improbable Texans' victory.

Eight wins later, here we are, with the Colts teetering on the brink of their season coming unplugged, although they've battled admirably to get to 6-6. Sunday at NRG Stadium, the Texans will look to push the Colts (and Andrew Luck) off that brink and into the abyss. Here are four things to watch for...

4. T.Y. factor
If you put together an all-time, all-opponent team for the Texans, without a doubt, T.Y. Hilton would be the No. 1 wide receiver. (For the record, a two-headed monster, with Tom Brady's head next to Peyton Manning's head, would be the starting QB and the MVP of that team.) In 13 games against the Texans, Hilton has put up 67 catches for 1,246 yards and nine touchdowns, with a whopping 18.5 yards per catch. His career against the Texans is basically the per game equivalent of a first team All Pro. In the first matchup this season, Hilton riddled the Texans' secondary for 115 yards on just four catches, while playing only about half the game due to injury. Shutting down Hilton, and putting the burden of the passing game in the hands of the other wide receivers is imperative, in part because...

3. Ebron factor
...the Colts' passing game is more than just Luck-to-Hilton. Frank Reich and Andrew Luck have resurrected the career of tight end Eric Ebron, a former first round pick in Detroit, who's flourished as a Colt. Ebron has become a deadly red zone target, with his 11 receiving touchdowns this season representing half of his career total of 22 (Ebron was drafted in 2014.). The pressure will be on Zach Cunningham to build off his performance last week against the Browns, which included his first career interception, a game changing pick six. It will be interesting to see how the Colts and Ebron continue to function without his tight end tandem partner, Jack Doyle, an underrated piece of this team's offense, who is now out for the season with a kidney injury.

2. Romeo, in the zone
If there is a defensive coordinator who is up to the task to figure out how to slow down the Colts — of course, they were slowed down to a shutout last week against the Jags, but I digress — it's Romeo Crennel, whose defense is sixth in the league in DVOA (15th against the pass, 2nd against the run). In the last eight games of the winning streak, since that win against the Colts in Week 4, the Texans' defense has given up just 16 points per game. Unlocking the code to pressuring Luck — the Colts recently went five games without giving up a sack — will be a gigantic key to Sunday's game. Expect more pressure and blitz packages than the Texans used against rookie Baker Mayfield last weekend, as any Luck turnovers are likely to come from decisions forced by pressure, not poor decisions from confusing coverage packages.

1. O'Brien, staying in character
Offensively, the keys are pretty simple — protect the football and protect Deshaun Watson. Bill O'Brien has accomplished this during the last month or so, and in particular the last couple games, by establishing the running game early. Lamar Miller has been dynamite the last two games, closing in on Pro Bowl honors with the spate of injuries (James Connor, Melvin Gordon) and indiscretions (Kareem Hunt) at the running back position in the AFC. If you're looking for a big reason the Texans had a tough time holding a 28-10 lead in the first game — Miller and Alfred Blue combined for 80 yards on 27 carries, just under three yards a carry. That's probably another big reason why Deshaun nearly got murdered that week — 7 sacks, 11 QB hits for the Colts.  Run the football, protect the football, protect Deshaun. Lather, rinse, repeat.