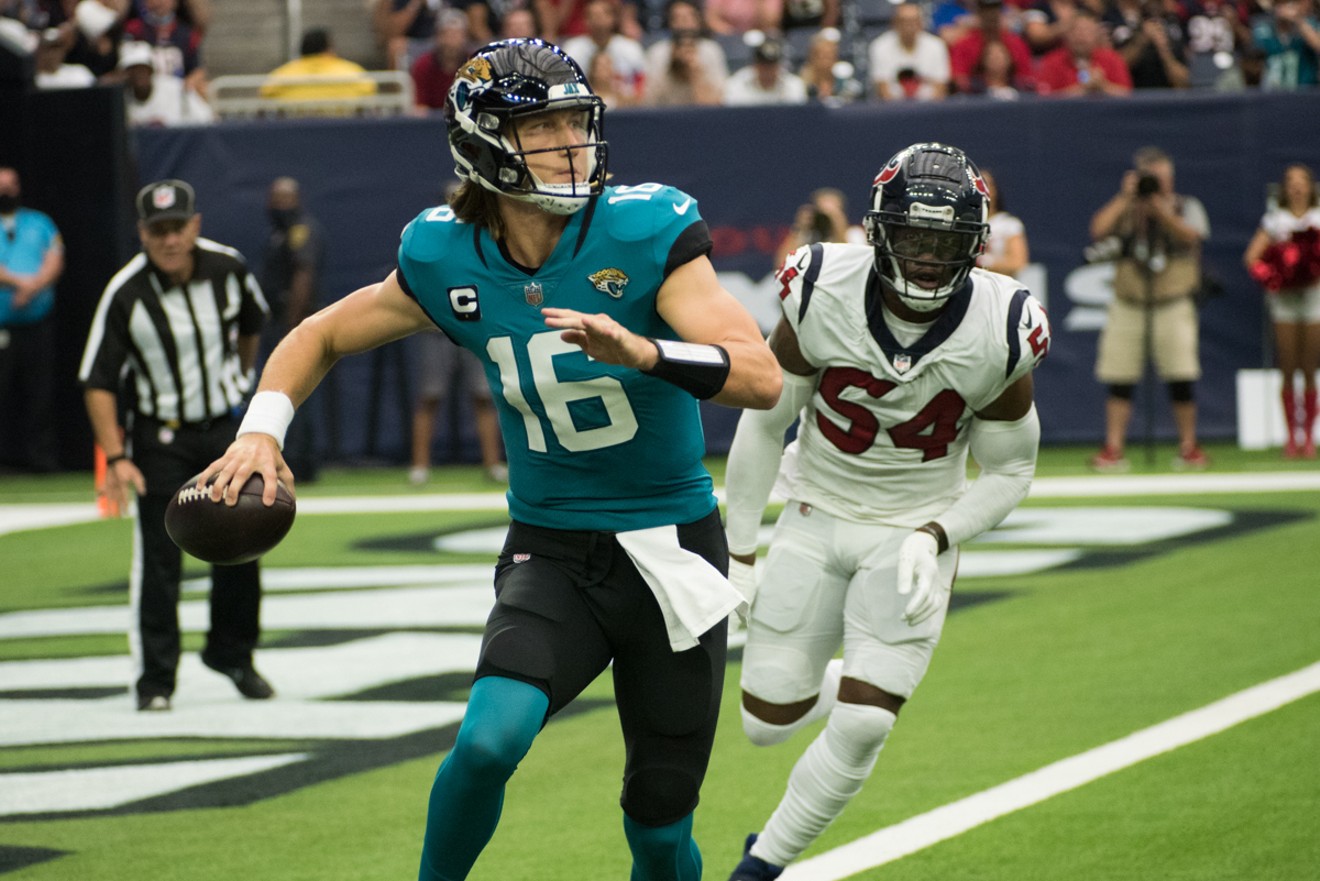 Trevor Lawrence is beginning to take ownership of the AFC South. Photo by Eric Sauseda
In the last half decade or so, we've seen the AFC South won by teams quarterbacked by Brian Hoyer, Brock Osweiler, Blake Bortles, and Ryan Tannehill. It's not been a great division. In a few of those years, a 9-7 record was good enough to get the job done. So it is with zero hyperbole when I say that this 2022 edition might be the worst version of the division we've ever seen.

The Titans and Jaguars are tied at the top (Jags have the tiebreaker, currently) with records of 7-8, although they've arrived there in very different fashions, with the Jags making a late season surge to get to 7-8 and the Titans losing five games in a row. Meanwhile, the Texans and Colts are locks to be picking in the top five of the NFL draft.

It's bad, and what's even stranger is that the game on Sunday between the Texans and Jaguars at NRG Stadium really has zero bearing on the divisional race, since the tie breakers essentially make the winner of the Titans-Jaguars game in Week 18 the division winner. It's a weird quirk in the schedule, and yet both the Jaguars and Texans appear motivated to play well on Sunday, the Jags to keep their momentum going, and the Texans for pride.

Oh, and the Texans' nine game winning streak against the Jags! So let's start there, shall we?

4. The streak
The Texans' current nine game winning streak against the Jaguars is one of the stranger anomalies in all of sports. It's one thing for a decent Texans team in 2018 or 2019 to sweep both games against the Jags (which they did). It's entirely another for a team to sweep another team amidst a three year run of 10-37-1. Yes, HALF of the Texans' wins over the last three seasons have come against Jacksonville. I would think that is enough motivation, independent of the playoff hunt, for the Jags to want to show up and ball out on Sunday.

3. Rise of Trevor Lawrence
The year 2021 was a fairly hellacious rookie season for Trevor Lawrence, especially when you consider he'd lost more games by the end of September than he had in his entire collegiate career at Clemson. However, a new head coach in Doug Pederson was just what the doctor ordered, and now Lawrence is beginning to fulfill the promise that he showed coming into the league, when experts said he would be a generational prospect. Since a loss to the Broncos in Week 8 capped a five game losing streak, Lawrence has led the Jags to a 5-2 record with a passer rating of 108, and a TD to interception ratio of 14 to 1. As mentioned above, this division is ripe for the taking, and Lawrence is on the verge of putting it in a stranglehold.

2. Rookies rising
One of the most encouraging things to happen in the Week 16 win over the Titans was the rise of several rookies making plays on defense. In fact, the three turnovers generated in the fourth quarter were all at the hands of rookies. Jake Hansen forced the Derrick Henry fumble early in the final quarter, Christian Harris had an interception that nearly sealed the game, and Jalen Pitre had the interception that did seal the game on the final play. Now, if Derek Stingley can come back healthy next season, and Kenyon Green can fulfill his potential at left guard, this rookie class will be dynamite, and I didn't even mention Dameon Pierce!

1. The NRG crowd — what do they want?
The Texans are in the midst of a very conflicting emotional time for their fans. On the one hand, Texan fans love their team and want to see them do well, even at the end of a lost season. On the other hand, this win over the Titans last week has put the Texans dangerously close to falling out of the top draft slot, and they could wind up picking as low as fourth overall, if they win their final two games. Additionally, more winning theoretically means that there is a better chance Lovie Smith is brought back next season. In short, I will be anxious to see just how invested the NRG Stadium crowd is in seeing a win on Sunday, given that winning is actually detrimental to the long term draft capital prospects for the Texans.