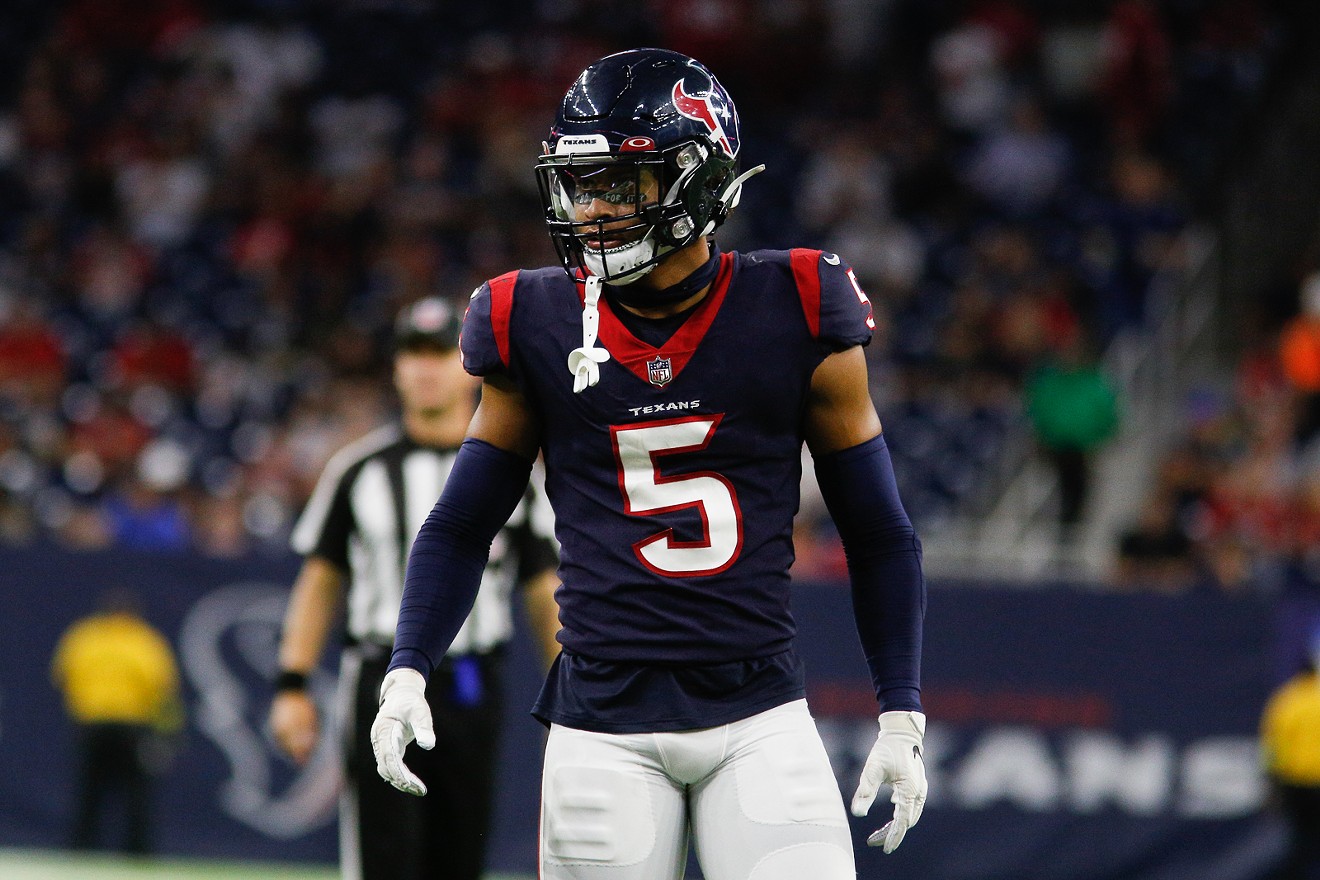 Jalen Pitre's rookie season has shown some promise, but also a need for improvement. Photo by Eric Sauseda
I think most people in Houston knewthe deal coming into the 2022 NFL season. The Texans were going to be one of the worst teams in football, and the season was likely to go in a direction where more Texan fans were rooting for Texan losses, and thus more favorable draft capital, than Texan wins. That is indeed where we are, particularly with what appear to be a few decent college quarterbacks to consider in the draft.

That said, there are a handful of games on the schedule in which even the most "draft capital" centric fans would want the Texans to emerge victorious. The game against the Browns (and Deshaun Watson) last week was one of those, and I think most Houston fans would have loved a win over the Cowboys on Sunday.

Alas, despite battling until the final seconds, the Texans missed a huge opportunity to allow their fans to feel good about the team for a few days, much like the way they missed a golden opportunity against the Browns in Week 13. Yesterday, the Cowboys rode a 98 yard drive in the final two minutes to a 27-23 win. The Cowboys are 10-3 on the season, and the Texans strengthened their hold on the number one overall pick in the draft, and are 1-11-1.

There were winners and losers yesterday. Here are a few:

4. Jalen Pitre
There have not been many overall bright spots in this lost Texans season, but undoubtedly Pitre qualifies as one. He burst onto the scene in training camp, taking the starting safety role from the first practice on, and after suffering through a midseason lull marked with some poor tackling, Pitre has seem a huge resurgence these last couple weeks. Against Cleveland, he had 16 tackles and an interception, and against the Cowboys yesterday, Pitre had 12 tackles, two pass breakups, and several bone jarring hits on Cowboy wide receivers. Pitre looks like a future star for this team.

3. Tremon Smith
The Texans were already dealing with a  depleted cornerback depth chart with Derek Stingley, Jr. missing his fourth consecutive game with a hamstring injury, and Steven Nelson leaving the game Sunday with an injury. Enter Tremon Smith, who had an interception in the first half to set up the Texans' second touchdown of the game, and then Smith had the interception in the fourth quarter that set up a possible game clinching touchdown drive (that never came, more on that in a minute). Smith has been a solid role player for the Texans since arriving in 2021, and his ability to step into the "next man up" role at cornerback yesterday was huge for the Texans.

2. Chris Moore
When it was reported on Friday that wide receivers Nico Collins and Brandin Cooks would be missing the game on Sunday, I somewhat sarcastically tweeted this out:

Moore had 10 catches for 124 yards, so you bet your bottom dollar that I will ignore the fact that I was being sarcastic, and now act like God's gift to fantasy football. Book it.

1. Pep Hamilton, for 55 minutes
I really want to like Pep Hamilton. The few times I've met him briefly, he seems like a nice, fun loving man. The problem is that he has been an abomination as a play caller and scheme architect for the 2022 Houston Texans, which trumps any degreee of niceness or love of fun in my book. Put simply, I'd rather have a jerk coordinating a top five offense for my team than a nice guy floundering at the bottom of the league. So on Sunday, for the first 55 minutes, I was psyched because Hamilton and his side of the ball were executing a very creative game plan, in which they went back and forth between using Davis Mills and Jeff Driskel at quarterback. It was good stuff! It was enough to maintain a 23-20 lead late into the fourth quarter. Unfortunately......

4. Pep Hamilton, in the final 5 minutes
.... with no Dameon Pierce available after Smith's second interception, Hamilton decided it would be a good idea to make Rex Burkhead, whose average yards per carry are probably better expressed in inches, not yards, the focal point of the offense. Of the four plays that were run inside the four yard line, on a drive where a touchdown clinches the game, Burkhead was heavily involved in three of them — two negative yardage handoffs, and a speed option that was aborted because Driskel appeared to run the wrong way. Pep Hamilton and Lovie Smith are likely to get fired after the season. Wherever they go, please let them take Rex Burkhead with them!

3. Nick Caserio's RB room construct
I mean, if only the Texans had a viable backup running back to Pierce in camp this summer. A veteran who has explosiveness, pelts on the wall, and the ability to make the occasional game changing play. A player like, let's say, MARLON MACK!

What's that you say? Mack was IN Texans camp this summer, and they cut him? And kept Rex Burkhead? Ah, this 1-11-1 thing is finally starting to make some sense.

2. Deshaun Watson
We will always be keeping an eye on Deshaun Watson in Cleveland, for both emotional and practical reasons. The emotional reasons are obvious — he quit on the Texans, and then made himself untradeable by not knowing how to act properly in (a few dozen) massage settings. The practical reasons have to do with the Texans owning Cleveland's first round picks this year and next year. On Sunday, the Browns lost to the Bengals 23-10, and Watson finally engineered a TD drive, after 18 tries at it. Please football gods, let him keep sucking.

1.  Kyle Allen
Speaking of sucking at quarterback, think about this — eight days ago, Kyle Allen was one of 32 starting quarterbacks in the NFL. A week later, he is on the Texans' inactive list, and has been replaced by a weird combination of Davis Mills and Jeff Driskel. Life comes at you pretty fast, huh Kyle?