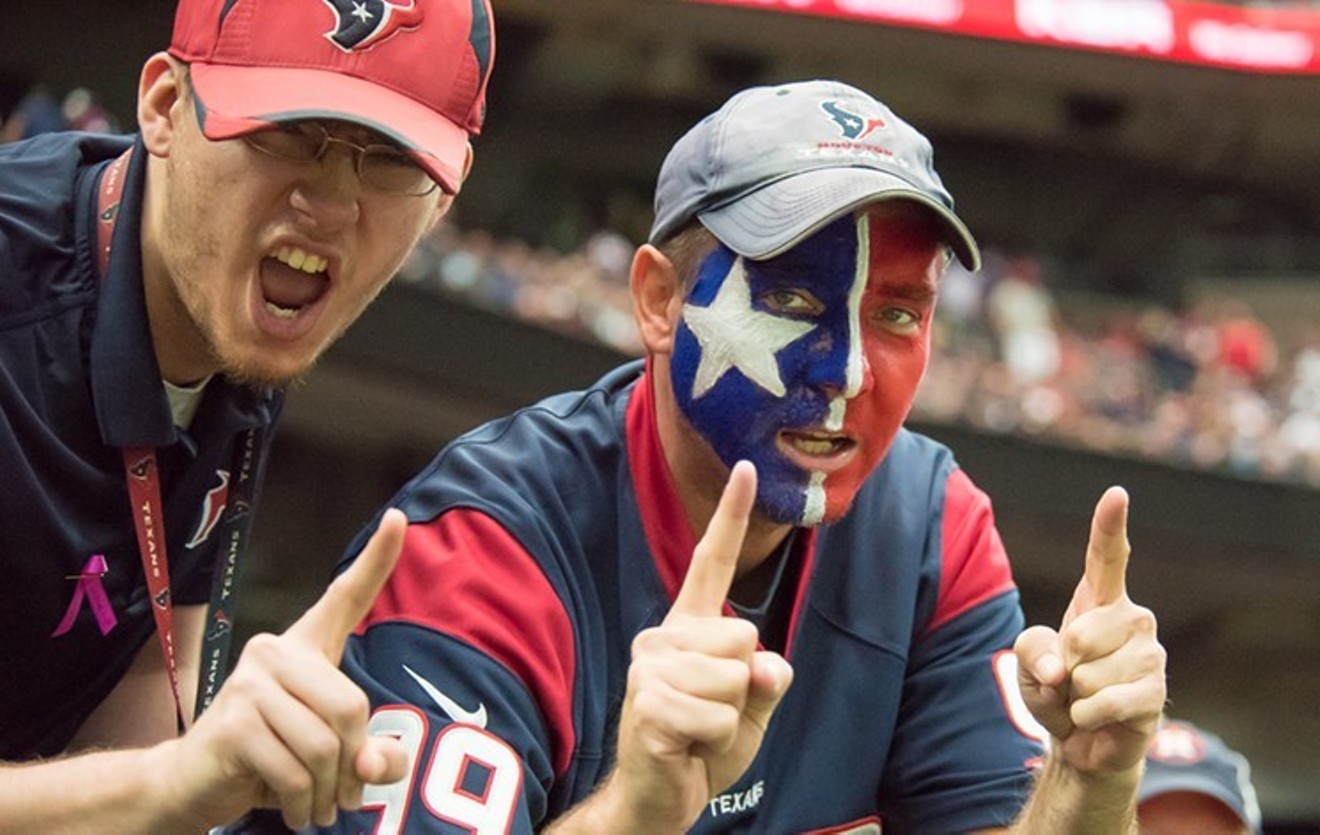 Texans fans like these guys will be allowed back in NRG Stadium for home games starting Sunday, but they'll have to bring their face masks. Photo by Jack Gorman

After opening their season in an empty arena, the Houston Texans announced Monday afternoon that a limited number of fans will be able to attend Texans home games at NRG Stadium for the rest of the season.

Starting with this Sunday’s game against the Minnesota Vikings, up to 13,300 fans will be allowed to sit in the stands. That accounts for approximately 20 percent of NRG Stadium’s capacity, a smidge lower than the city’s maximum event venue occupancy cap of 25 percent that Houston Mayor Sylvester Turner announced on September 9.

Earlier this month, Turner said that Houston Dynamo and Dash soccer games with fans in attendance would be some of the first public events allowed to go forward within the city limits after being approved by the city. He said that public events would only be approved for venues that could enforce a 25 percent occupancy cap along with mandatory face masks, social distancing and temperature screens at the door.

In a press release, the Texans said tailgating will still be forbidden until further notice, all fans age 10 and older and all gameday staff will have to wear face masks “except while actively eating or drinking” and social distancing of at least six feet will be enforced “beginning in the parking lot, at the entry gates and as you move about NRG Stadium.”

The release also stated that the plans to open NRG Stadium to fans have been approved by the building’s landlord Harris County Sports & Convention Corporation, and that the team has worked hard “to implement the rigorous protocols” required by the NFL, the Centers for Disease Control and local health authorities “to ensure the health and safety of all working staff and fans attending the remaining games this season.”

Season ticket-holders that didn’t defer for this season get first dibs on tickets for the remaining seven home games, and all remaining tickets will go on sale at noon Tuesday at Ticketmaster.com exclusively.

In addition to implementing socially distanced seating and concession lines, NRG Stadium is shifting to totally mobile ticketing and cashless transactions to limit unnecessary physical contact. The team also said there will be 475 hand sanitizing stations dispersed throughout the stadium as well to help fans stay clean and (hopefully) coronavirus-free.

“We look forward to welcoming our home-field advantage back and resuming our cherished Texans gameday traditions,” Texans President Jamey Rootes said in a statement.

It’s an advantage the Texans are sure to be grateful to have back in their arsenal, as the team is off to a demoralizing 0-3 start this season and could use all the help they can get.

When Turner was asked during a Monday afternoon press conference about the Texans’ plan to invite fans back to the stands, he put his hands together, bowed his head and said “Let us pray.”

While it looked at first like he might’ve been asking God to protect Houston football fans from catching COVID-19 on gameday, he clarified his intentions after a few seconds of silence.

“I was praying for a win,” he said with a chuckle.
KEEP THE HOUSTON PRESS FREE... Since we started the Houston Press, it has been defined as the free, independent voice of Houston, and we'd like to keep it that way. With local media under siege, it's more important than ever for us to rally support behind funding our local journalism. You can help by participating in our "I Support" program, allowing us to keep offering readers access to our incisive coverage of local news, food and culture with no paywalls.
Make a one-time donation today for as little as $1.