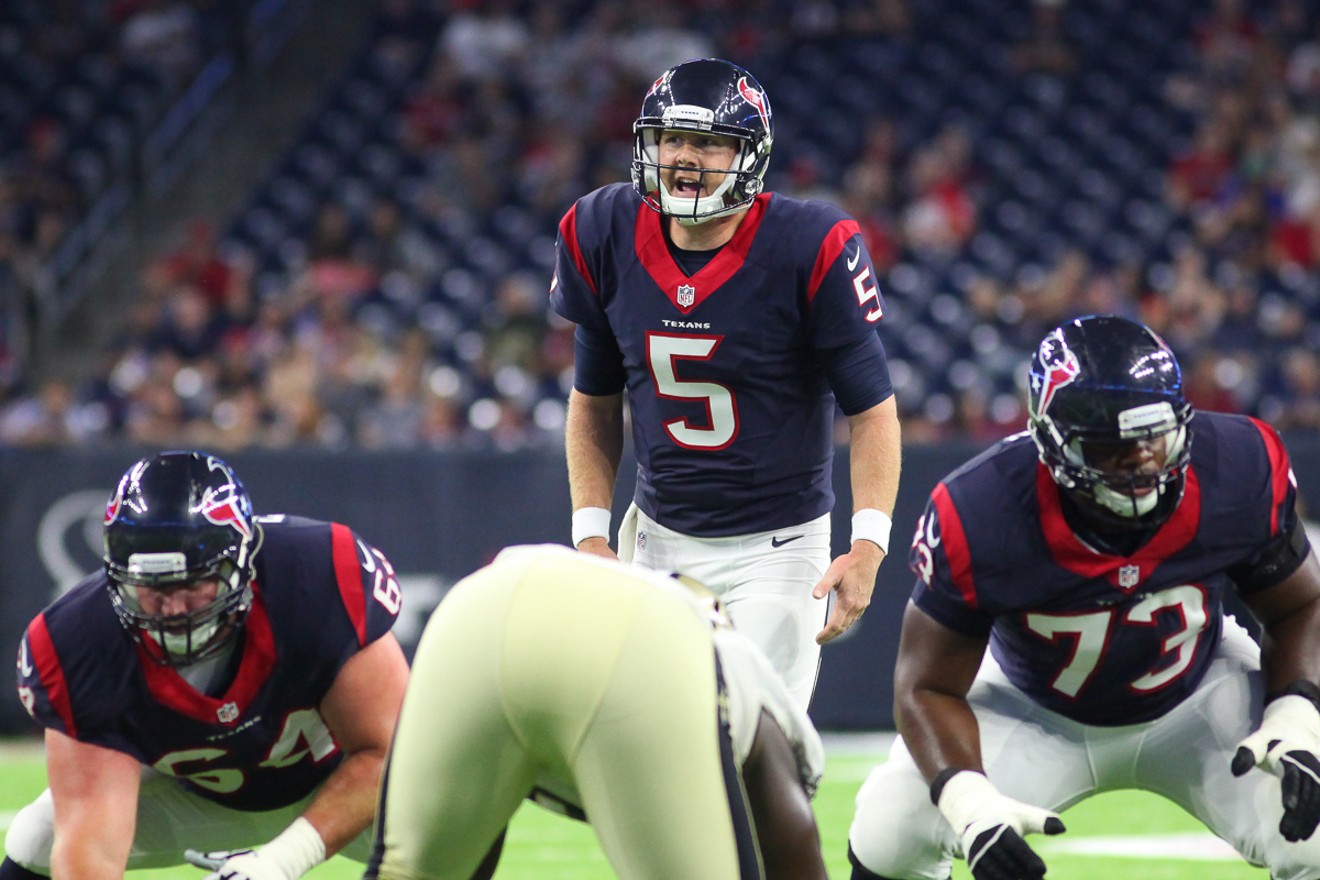 Brandon Weeden was solid in his first preseason outing. Photo by Eric Sauseda
October 29, 2017 was the last time that we saw Deshaun Watson on a football field, in a competitive game, and therefore, by definition, that was the last date that we saw watchable football out of the Houston Texans. Once Watson went down with a torn ACL a few days after that game in Seattle, the Texans went on a 1-8 downslide that made the city want to forget football exists.

So now Deshaun Watson is healthy, and last night, prior to the Texans' 17-10 win over the Kansas City Chiefs in Arrowhead Stadium, he was among a slew of Texans veterans who were working out on the field before the game, the type of workout that would indicate we will not see him play that night. Admittedly, as that played out while I was doing the pregame Texans' show, it felt a little like Christmas was being pushed back to New Year's. I wanted to see Watson take snaps, even if they were just inconsequential handoffs to Lamar Miller.

In the end, though, Watson was the rare person performing that workout who actually wound up playing in the game, albeit for one series in which he completed one pass for four yards. So Christmas didn't necessarily get moved, but we really only got to open our stocking gifts. And that's fine.

In the end, thanks to some stellar backup QB play and a goal line stand in the final minute, the Texans came away with the win. In a game where it's more about guys fighting for jobs than the outcome on the scoreboard, there were winners and losers. Let's examine....

4. Jordan Akins
It feels like Bill O'Brien has been trying to find a dynamic solution at tight end for four years now, and that the drafting of both Akins and fellow rookie, sixth round pick Jordan Thomas, was the "enough is enough" moment. These are two very athletic rookies, and we got a taste of what things might look like this season from Akins, who scored both Texans touchdowns and looked like a dangerous weapon. Akins is a 26 year old rookie, thanks to a stint in minor league baseball, and it's fun to think what he might be able to do down the seam and in the middle of the field with Watson under center.

3. Troymaine Pope
With D'Onta Foreman on the PUP list, there are snaps to be had at running back behind Miller. Alfred Blue got first crack at it last night, and he was, well, positively Alfred Blue — 8 carries, 14 yards, and a dropped pass in the flat. I have no idea why this team keeps Blue around, but whatever. Thankfully, we got a taste of Pope, whose 34 yard screen catch and run gave a glimpse into what he might be able to do in a James White/Dion Lewis style role for this team. He added another 11 yard scamper in the run game, as well. I like Troymaine Pope., he was my number one "camp crush" for a reason.

2. Duke Ejiofor
For the last few years, the Texans have been very top heavy at outside linebacker. Jadeveon Clowney, who's really more of a hybrid defensive lineman, but we will play along, has been a Pro Bowler, and Whitney Mercilus, when healthy, has been right behind him in consistency and productivity. After that, though, it's been a parade of street bodies and undrafted guys. Brennan Scarlett, to be fair, looks to be an improving piece. However, Ejiofor last night looked to have some juice, with an array of pass rush moves that bely his sixth round rookie status. He wound up with three QB hits, and to me, is worth watching the rest of this camp as a guy who could steal some snaps as a pass rushing specialist on some third downs.

1. Brandon Weeden
Let's face it, if Deshaun Watson goes down with a long-term injury again, this team is probably, at best, trying to piece together ugly wins like they did in O'Brien's first three seasons here. However, Brandon Weeden showed some things last night, going 9 for 11 for 97 yards and the two TD's to Akins. Weeden looked decisive, getting the ball out fast, a necessity for him behind that offensive line, and showed for at least one night that they probably should have kept him around last season.

4. Short yardage situations
There are undoubtedly still a ton of things for this team to work on, and I can't remember the last time I felt confident that they could go get a yard on a short yardage down and distance situation. A few plays after busting off a 19-yard run that made you harken back to the Lamar Miller days in Miami, Miller was stuffed on a 3rd and 1 run around midfield. Then, in the fourth quarter, after a spectacular sandlot style improv scramble from Joe Webb, the Texans were stuffed on a 4th and 1 that could have led to an insurance score in the waning minutes. Overall, it was an encouraging night offensively, but these short yardage situations, the inability to get A YARD, are depressing.

3. Stephen Anderson
I'll have my latest 53-man roster prediction for Monday in this space, but my first one at the outset of training camp did not include Anderson making the team. This surprised some people. Look, they drafted two tight ends for a reason, and Anderson is clearly the fourth tight end right now, and he just doesn't do anything at a level where it's worth keeping him around over a more potentially dynamic, consistent piece at the back end of the roster. Last night, he dropped a pass, for good measure. Anderson is the Alfred Blue of tight ends.

2. Dee Virgin
There is a roster spot to be had by somebody at cornerback behind Aaron Colvin, Kevin Johnson, and Johnathan Joseph, and it appears Virgin is getting first crack at it. Early in the game, he made a nice open field tackle on a third down play, and he does show some pop on special teams. However, Virgin was burned over the top for the Chiefs' only touchdown, and his pass interference penalty in the end zone set up the Chiefs' series of downs at the end of the game. Virgin was bailed out by some vanilla play calling from the Chiefs, and some solid goal line defense by the Texans. Strangely enough, I think I might have Virgin in my next 53-man prediction, in part because the depth is so iffy at cornerback.

1. Brock Osweiler
One thing about Preseason Week 1 — with as many quarterbacks as have played here in the last five seasons, it's almost like a one week season of "This Is Your Life" for Texans fans, and if there were a season finale for that series, it would be Brock Osweiler. Just as a reminder of what a great place we are in now at QB, I'll inform you that last night, for the Dolphins, Osweiler went 10 of 21 for 83 yards. FOUR YARDS per pass attempt. Do you have any idea how difficult it is to be THAT bad on 21 pass attempts? Only Brock, only Brock.


Listen to Sean Pendergast on SportsRadio 610 from 2 to 6 p.m. weekdays. Also, follow him on Twitter at http://twitter.com/SeanTPendergast and like him on Facebook at https://www.facebook.com/SeanTPendergast.
KEEP THE HOUSTON PRESS FREE... Since we started the Houston Press, it has been defined as the free, independent voice of Houston, and we'd like to keep it that way. With local media under siege, it's more important than ever for us to rally support behind funding our local journalism. You can help by participating in our "I Support" program, allowing us to keep offering readers access to our incisive coverage of local news, food and culture with no paywalls.
Make a one-time donation today for as little as $1.