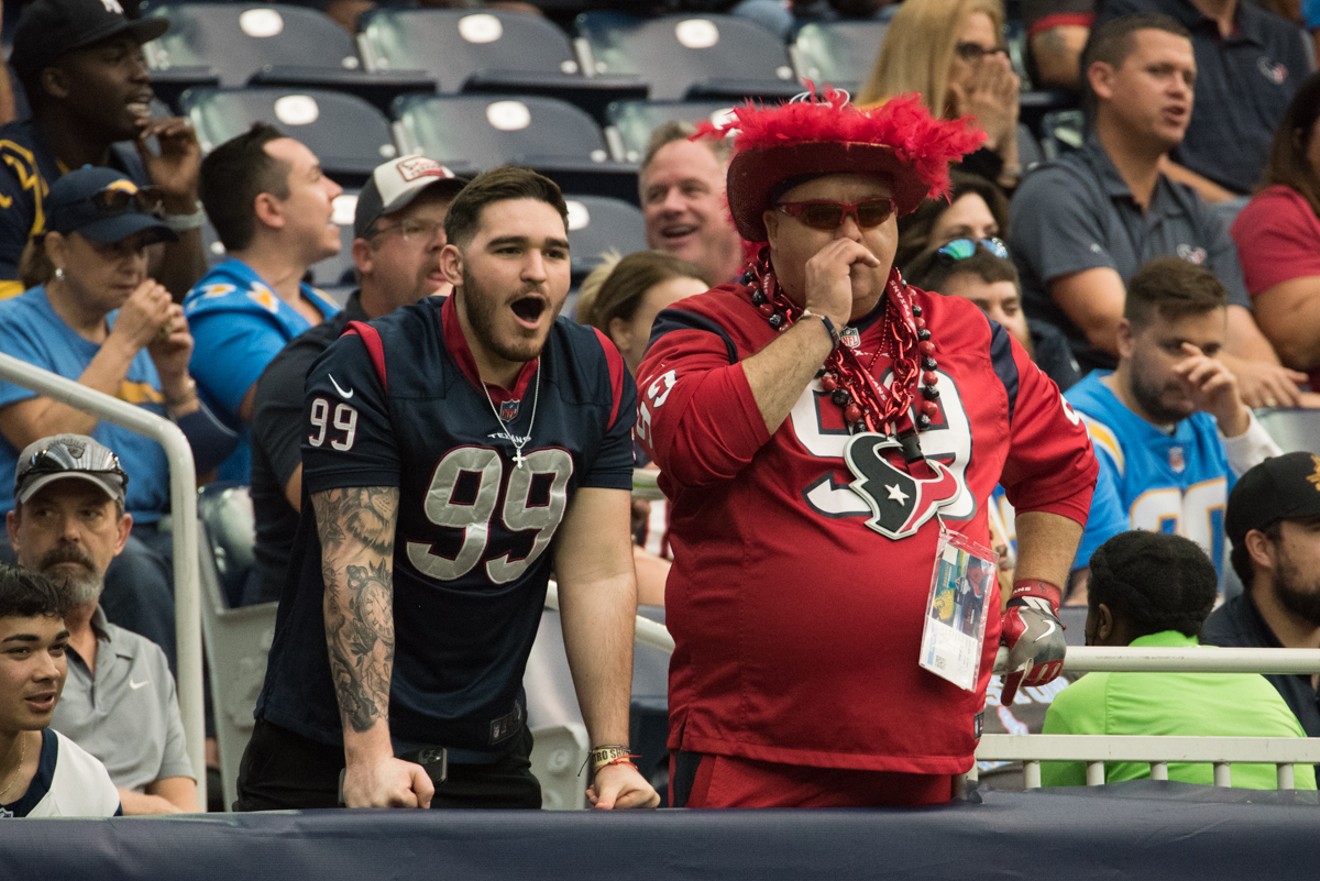 Texan fans have plenty of great oppoerutnites to go see the team play on the road in 2022. Photo by Jack Gorman
For those who missed the reveal of the Houston Texans' schedule from last week, let's get you caught up. Certainly, you can click the link to my article with some analysis on the schedule, OR you can watch one of the delightful videos the Texans' amazing social media team put out last week, like this one:

Look, any schedule was going to be a tough schedule for this 2022 iteration of the Houston Texans. They're not a great football team. However, there is one aspect of the 2022 Texans' schedule that is worthy of MAJOR superlatives, and that is the "Travel Channel" worthy ROAD schedule for this season's team. Here it is in emoji form:


Away Game Emoji Schedule. Drop that emoji if ya coming!

Those are some amazing road trips! As someone who's been to every single one of those cities, in both a sporting and non-sporting capacity, I feel uniquely qualified to rank these trips, so that you can make sound decisions on which game (or GAMES, plural) to travel to this fall. So without further ado, here is the annual Pendergast ranking of the Texans' road schedule, from a travel enthusiast's perspective:

7. (tie) Any AFC SOUTH road trip
Week 16: December 24 at TENNESSEE, Noon CT
Week 18: January 7/8 at INDIANAPOLIS, Date/Time TBD
Week 5: October 9, at JACKSONVILLE, 1:00 p.m. ET
Until the Texans are playing meaningful games in the division, where the division title or a playoff spot is on the line, it's going to be hard for these trips to ascend out of the basement. All three are cities where you can find a good time (Nashville, probably the easiest to do so), but for this season, add in the fact that the Nashville trip is on Christmas Eve, and it really damages the panache of a road trip inside the AFC South. Jacksonville in October might be the best of these three, as it is a winnable game, and the weather should be pretty nice. Let's move along....

6. Big Apple road trip
Week 10: November 13 at NEW YORK GIANTS, 1:00 p.m. ET
It just goes to show you how strong this schedule is that a trip to New York City would be at the bottom of the non-division roadies. Now, to be completely accurate, the "New York City" part of this trip is a conscious choice, not a necessity, because the game itself (the fulcrum of ALL these trips) is played in North Jersey. So, if you're a Sorpanos enthusiast like I am, then a stay in the suburbs of North Jersey might be fun. If you stay in the city, it's all fun while you're running around Manhattan and such, but the journey to and from the stadium on game day is a gargantuan pain in the ass. Weather may also be an issue, as it will be in that frigid, northeastern purgatory in between "nice fall weather" and "pleasant holiday snow."

5. South Beach road trip
Week 12: November 27, at MIAMI, 1:00 p.m. ET
If you're going to travel in November, a trip to South Beach is a higher recommendation than one to the Big Apple, and the nice thing about this trip is that it occurs on Thanksgiving weekend, so if you need an excuse to ditch family obligations, this is a pretty good one! Also, football fans in the state of Florida are fairly dispassionate, so getting your hands on very cheap tickets should be no issue. This trip is a very solid weather, night life, and cost effectiveness play.

4. Jerry World road trip
Week 14: December 11 at DALLAS, Noon CT
Normally, I'd say that the nice thing about a trip up to Dallas for a game is that you don't need to incur the expense of flying to the game, but with the price of gasoline, you might be better off flying first class to DFW than driving four hours up I-45. Yikes. Anyway, because these two teams play nearly every year in the preseason, we don't realize that this is only the third time EVER that the Texans will have played in Arlington in the regular season (2006 and 2014, the other two times). This game comes one week after Deshaun Watson's return to NRG Stadium, so this will cap off a pretty emotional eight or nine days for Texan fans. Honestly, if you've never been to Jerry World, you need togo  just one time to check it off the list.

3. Windy City road trip
Week 3: September 25 at CHICAGO, Noon CT
This trip would have been much further down the list if it weren't in September. I lived in Chicago for three years. There are some northern cities where going to a wintery game is recommended as part of the experience (Green Bay comes to mind). Chicago is not one of those cites. The second that temperatures drop below 30 degrees in Chicago, the wind makes it a harrowing experience, and no amount of snow can create a "winter wonderland" effect. It's just miserable there after mid-October. This game is still in the autumn sweet spot, though, so go ahead and load up on some deep dish pizza, Portillo's Italian beef, and Old Style beer. Get fat! Enjoy!

2. Rocky Mountain High road trip
Week 2: September 18 at DENVER, 2:25 p.m. MT
This is an early season game, so you might say to yourself "Good, I will avoid a Denver snowstorm!" Not so fast, my friend! I also lived in Denver for three years, and it seemed like there were two major snowstorms every year — one in September and one in April. It's a weird place. However, if you head up there with a few days cushion before the game, you'll have some delightful opportunities to head up into the mountains and relax amidst some of the most gorgeous views our nation has to offer. Denver itself has a fun downtown area with lots of bar and restaurant choices, and if you stay in town until Tuesday, you can catch a Rockies game at Coors Field Monday night.

1. VIVA LAS VEGAS road tip!
Week 7: October 23, at LAS VEGAS, 1:05 p.m. PT
As great as the previous eight trips mentioned have the potential to be, this whole list is one big landslide in favor of the late October trip to Vegas. Catch a show, gamble, stay out late, do Vegas things, and then hit the game on Sunday. The ONLY downside to this trip is that football tickets are absurdly expensive on the secondary market. If you plan on going, I would start networking with friends who have access to Texans road tickets TODAY. It could be worth it.