NFL Playoffs, Divisional Round: Texans-Chiefs — Four Things To Watch For 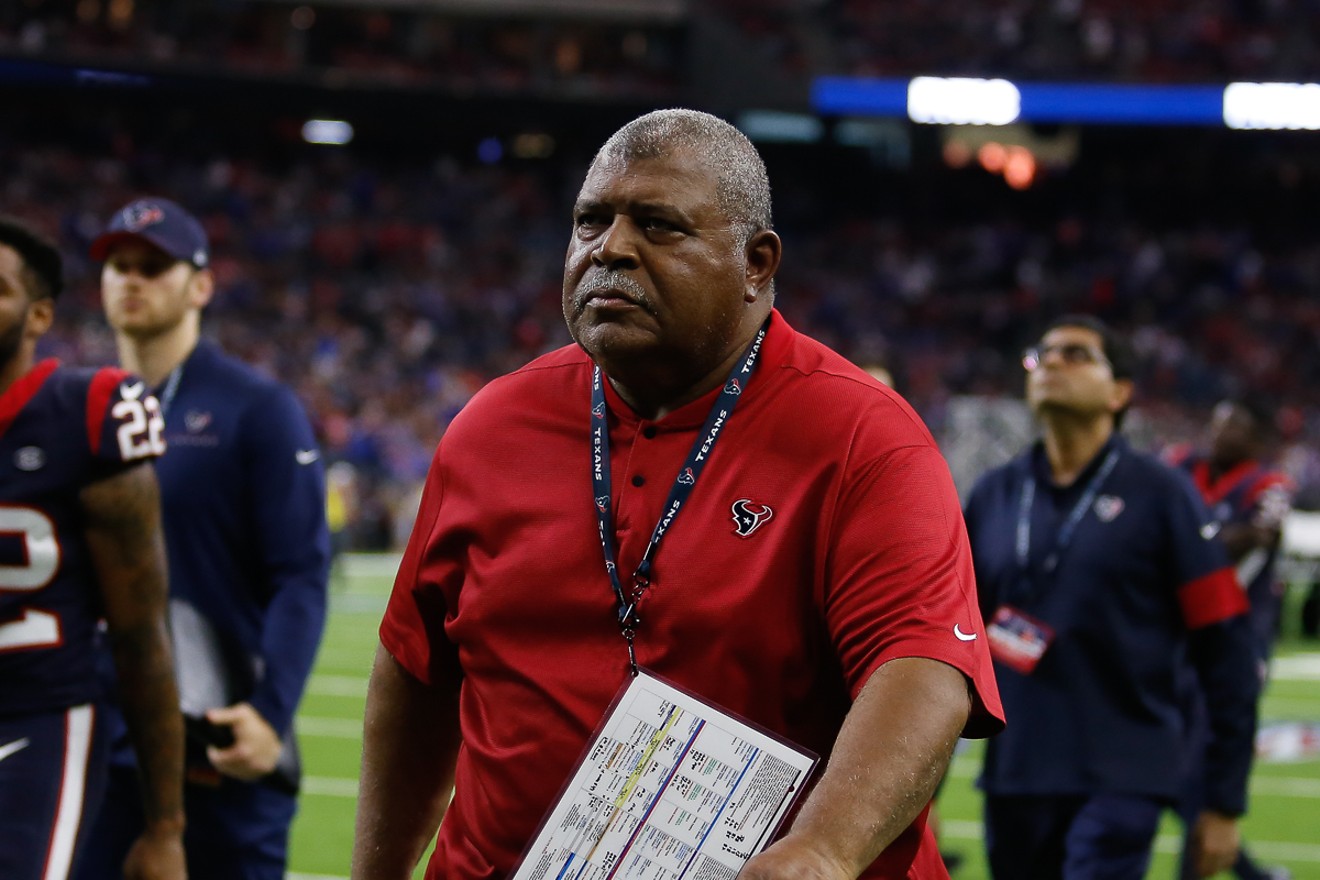 The pressure is on Romeo Crennel to find a way to stop Kansas City for a second time this season. Photo by Eric Sauseda
Which Houston Texans team shows up on Saturday? Heading into the Texans' fourth crack at getting to an AFC title game in team history, that's the biggest question surrounding this trip to Kansas City to face defensing league MVP Patrick Mahomes and the Chiefs.

If the Texans were a one story house, it would be the tallest one story house on the planet, with the widest chasm between the floor and the tippy top of the ceiling. At their best, the Texans are capable of soundly beating these very Chiefs, which they did in Week 6 by a score of 31-24, possessing the ball for a whopping 40 minutes. At their worst, the Texans are capable of trailing a going-nowhere Denver Bronco team 38-3 early in the second half AT HOME.

That is the schizophrenic organism that we are dealing with here. Obviously, if the "bad Texans" show up, then all is lost. I don't think that will happen, as they've generally been very focused against good teams on their schedule, even in the 41-7 loss to the Ravens, which was more about the Ravens being on a siege than it was the Texans sucking.

Against these five other AFC playoff teams this season, the Texans have gone 4-1. I choose to think that THAT is the team we will see on Sunday, in a game that the Texans may very well be leading in the fourth quarter and asking Deshaun Watson to close things out. Here are four things to watch for heading into a fun weekend of football....

4. Saturday scoreboard
Before the Texans take the field on Sunday, there is a small matter of the other half of the AFC bracket on Saturday night. If things had gone according to the odds last weekend, it would be the Texans in Baltimore on Saturday, but the Tennessee Titans beat the New England Patriots in Foxboro, and thus, the 6-seed Titans will do the honors with the Ravens. The Titans are a similar level underdog in Baltimore as the Texans are in Kansas City, around 9.5 points, and Titans RB Derrick Henry has carried the ball over 30 times in each of the past two weeks, so it's dicey for the Titans. However, if these two big underdogs, the Titans and Texans, can pull off the upsets, then we will have an AFC title game at NRG Stadium next weekend between the Texans and the Titans, or as I like to call them, the undead Oilers. Now, THAT would be something.

3. Ka'imi Fairbairn
When these two teams faced off in Week 6, Fairbairn was in the midst of the most inconsistent stretch of his young career, a four game slide where he missed four extra points and three field goals from Weeks 3 through 6. Since then, Fairbairn has hit 24 of 25 extra points and 16 of 18 field goals, including the game winner in overtime against the Bills last Saturday. Look, the Texans are not going to go into Arrowhead Stadium and blow out the Chiefs. If the Texans win, it will probably be a close game in the fourth quarter, which means accurate placekicking is at a premium. Fairbairn should elicit confidence in Texan fans if the game comes down to a kick.

2. Secondary reinforcements
Also, back in Week 6, from a health standpoint, the Texans were holding on for dear life at the end of the game on the defensive side of the football. Bradley Roby had left the game with a hamstring injury, and Johnathan Jospeh was also banged up, so the Texans somehow held the Chiefs to seven points over the final three quarters with Keion Crossen, Cornell Armstrong, and Phillip Gaines as their top three cornerbacks. Fast forward to this week, Gaines is on injured reserve, and the other two aren't even among the top five corners on the team. Roby is healthy and should draw the Tyreek Hill assignment, and the next two cornerbacks, Garrio Conley and Vernon Hargreaves, two former first round picks, were both acquired after Week 7. If J.J. Watt can help lead a decent pass rush, then these corners should have enough time on the back end to be competitive against the Chiefs receiving corps.

1. Watson vs Mahomes
All of these positional matchups, and we all know that, at the end of the day, it comes down to these two quarterbacks, taken two picks apart back in the 2017 NFL Draft. Mahomes is the defending league MVP, and Watson is the fearless wild card, with ice water in his veins. Both had turnover issues in the first meeting between these teams, each turning the ball over twice. The winning quarterback will be the one who skews closer to perfection in that category. Expect both to land haymakers throughout the afternoon. Bottom line, this is going to be fun, the first postseason chapter in what should be a decade long heavyweight fight between two of the best young quarterbacks in the game.