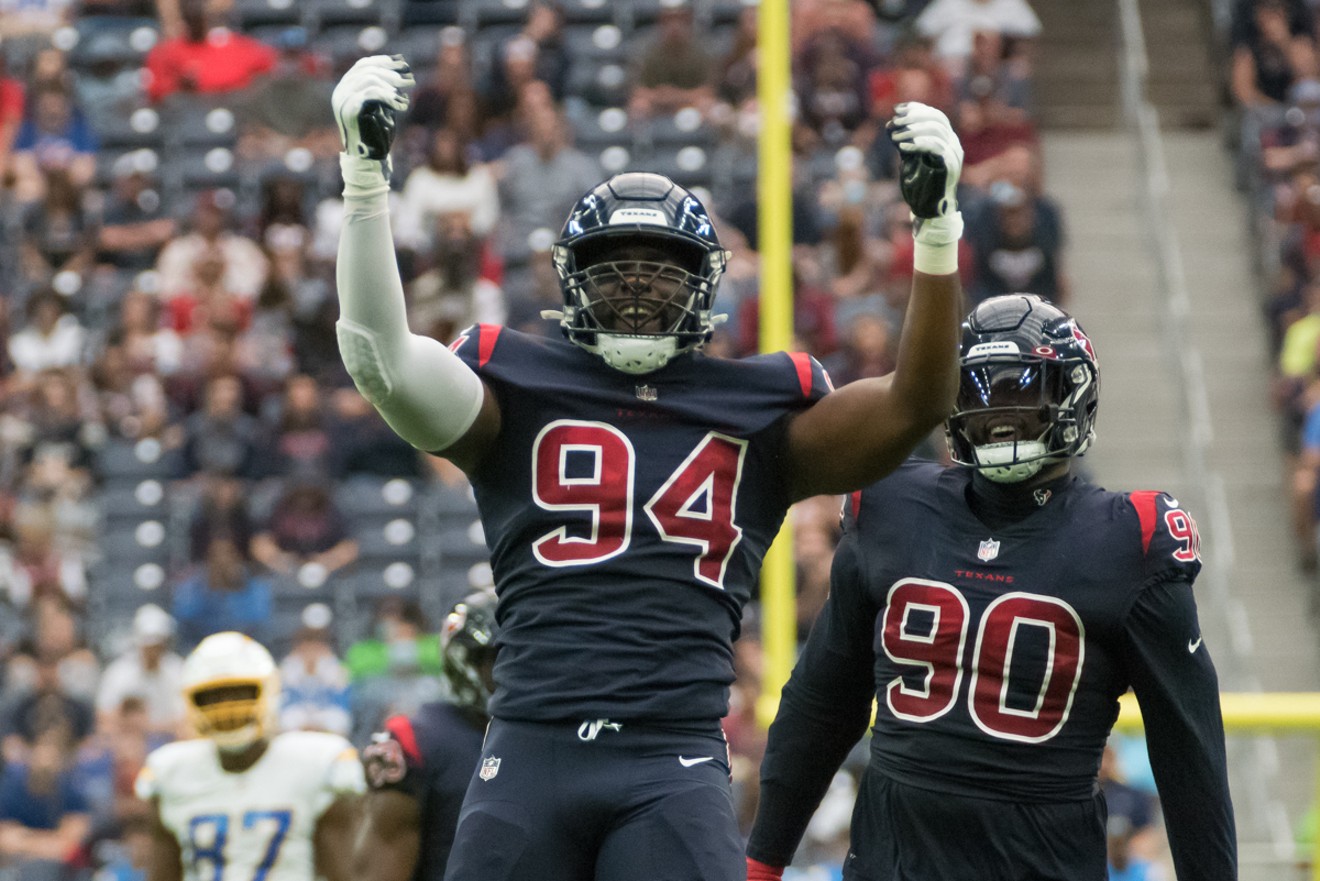 The Texans' defense, with replacement players like Harris (94), came up huge against the Chargers. Photo by Jack Gorman
In a time of year that is known for spontaneous miracles, there might be no more miraculous occurrence than the feat the Texans pulled off on Sunday afternoon at NRG Stadium. Saddled with the ouster of 16 players on the COVID-19 reserve list, causing serious depletion along both sides of the trenches, offensive line and defensive line, and going against a quarterback (Justin Herbert) who was elected to start in the Pro Bowl in January, the Texans found a way to soundly defeat the Los Angeles Chargers, 41-29.

As the season wears on, perhaps there are some pieces beginning to take shape. Little things here and there to generate optimism for 2022, maybe even some not so little things like a possible starting quarterback in Davis Mills. The best the Texans can do in the standings is finish 6-11, but some momentum heading into an offseason where they will be flush with draft capital will sure feel different than the mess we experienced throughout the spring of 2021.

As for yesterday's festive atmosphere at NRG Stadium, let's get to some winners and losers, shall we? Here we go.... 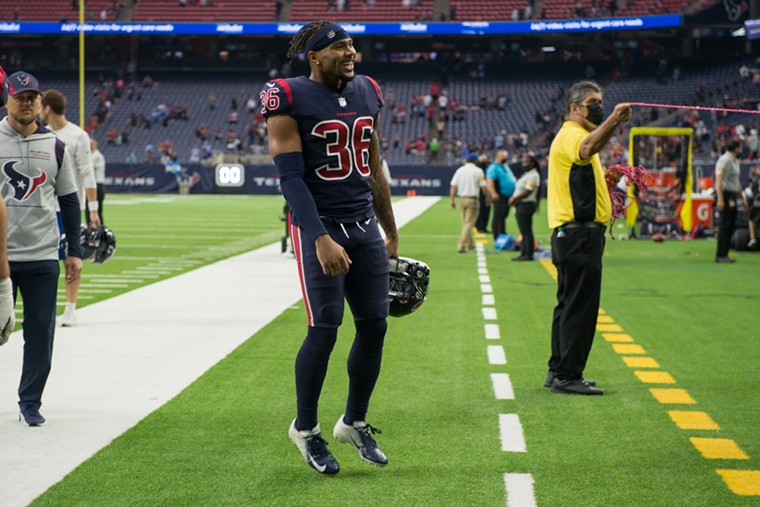 Jonathan Owens was one of many practice squad players to make some plays on Sunday.
Photo by Jack Gorman
4. Omicron variant
I've said this before, and will say it again — when websites begin to create a tracker to keep tabs on the total amount of anything, it's a pretty good sign that said thing is out of control. Such is the case with the Omicron variant of COVID-19 and the NFL, where the league went into the weekend with over 170 players on the COVID-19 reserve list. This game between the Texans and Chargers was probably the closest thing the league had to a "COVID Bowl" all weekend, with the Chargers missing key players like Joey Bosa and Austin Ekeler, and the Texans missing 16 players, as of kickoff. Credit the Texans' practice squad substitutes, particularly safety Jonathan Owens (known in most circle as "Simone Biles' boyfriend") who was able to secure an interception off Herbert and a fumble recovery, two huge plays in the win.

3. Opening drives
Remember the last three seasons before 2021, under Bill O'Brien as the play caller and with Deshaun Watson at quarterback, when the Texans made scoring on opening drives look like they were trying to split the atom while blindfolded? Well, the 2021 Texans don't do much all that well consistently, but they have found a little something on opening drives these last three weeks, since Mills became the starting quarterback again. Against Seattle, Jacksonville, and yesterday against the Chargers, Mills has engineered touchdown drives on the Texans' opening possessions offensively:


RB Rex Burkhead carries for a 25-yard rushing touchdown, his longest carry of the season and second touchdown scored as a Texan.

Houston has scored opening-drive touchdowns in three consecutive games, the team's longest such streak since Weeks 8-11 of the 2011 season. #LACvsHOU pic.twitter.com/0KsVuWCClM 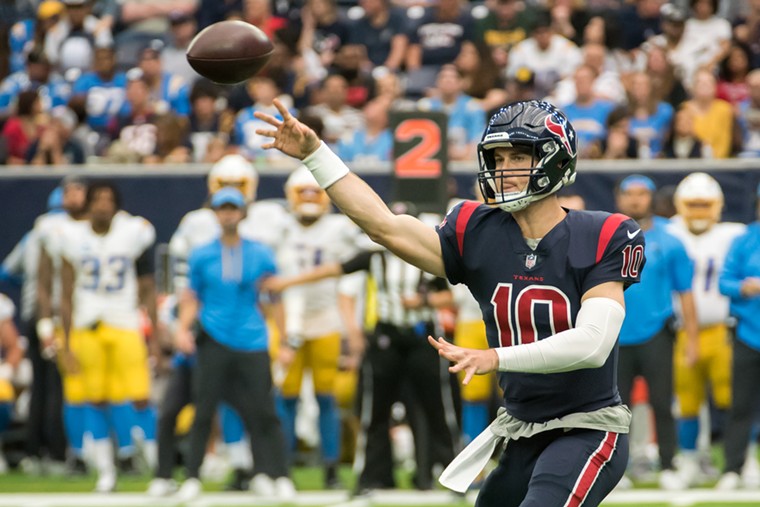 Davis Mills is rapidly becoming a rookie success story.
Photo by Jack Gorman
2. Davis Mills
The production on opening drives isn't the only area in which Mills has improved since his first six game stint as the starting QB earlier this season. Mills looks much more comfortable in recognizing what defenses are doing pre-snap, he looks much more comfortable in the pocket, and it has helped that offensive coordinator Tim Kelly has been more aggressive in his play calling, particularly in the second half the last two weeks. It was a real illustration of the consistency that Mills is beginning to develop that his first and second half stats were nearly identical yesterday:

Also worth noting, Mills protected the football flawlessly on Sunday, no fumbles, no picks, just one sack taken. Big picture, Mills and New England's Mac Jones have probably been the two best in an underperforming class of rookie quarterbacks, and Jones was awful on Sunday against Buffalo, as he threw for just 145 yards with two picks in a 33-21 loss to the Bills.


#Texans legend Andre Johnson and 50 cent are sitting with the McNair family. pic.twitter.com/jvROceaeI5

Throw in the ultra sweet Janice McNair, and that is quite the eclectic crew in the owner's suite. Good times, baby! 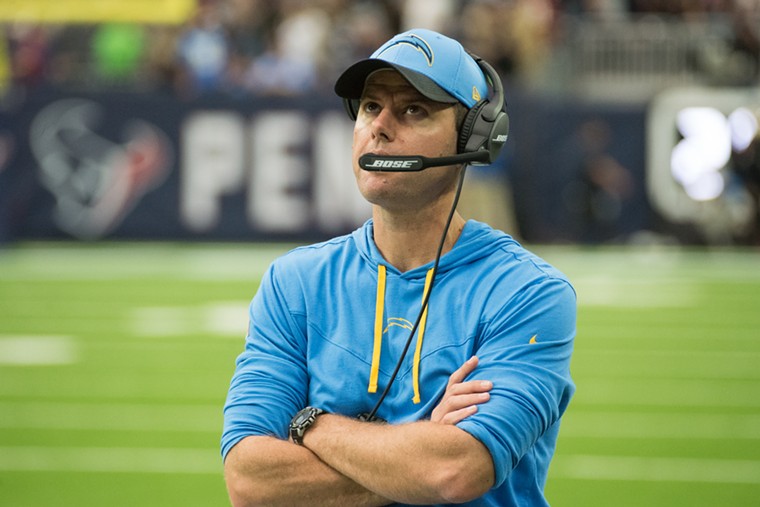 It was a rough afternoon for first year head coach Brandon Staley.
Photo by Jack Gorman
4. Brandon Staley
When the Chargers were 4-1 earlier this season, and Brandon Staley was making all sorts of unconventional (but successful) game management decisions, he was the toast of the league. Now, here we are, ten weeks later and 4-6 since then, and he was just outreached by fellow first year head coach David Culley. The Chiefs are now running away with the AFC West — they clinched the division yesterday afternoon — and the 8-7 Chargers are basically in a round robin with the 7-8 Broncos and the 8-7 Raiders in the season's final two weeks to try to stay in the playoff hunt. The Chargers wake up this morning as the 8th seed in the AFC.

3. "TEXANS UNDER 4 wins" bettors
As someone with a few sawbucks on the OVER for the Texans' 4 win total in Vegas, Sunday's win was a complete gift from the gambling gods. When they were 2-11 two weeks ago, with three of their final four game against likely playoff teams, I wasn't feeling so hot. Now? Hey, I feel like they're capable of pulling off the upset in San Francisco next weekend, or against the Titans (who they beat in Week11 already) at home in Week 18.

Rex Burkhead is now the Texans' leading rusher for 2021, surpassing the departed Mark Ingram.
Photo by Jack Gorman
2. Mark Ingram
In one of the most exasperating, sad, depressing statistical developments of this (or any) Houston Texans' season, going into yesterday's game, Mark Ingram was the Texans' leading rusher for the season. Now, nothing against Mark Ingram, who seems like a very solid dude, but he has last seen in a Texans' uniform rushing for 9 yards on 6 carries in Week 7 against Arizona. He was traded to New Orleans just a couple days later, with 294 rushing yards to his name, as a Texan. Well, with 149 yards on 22 carries, Rex Burkhead seized the lead in the Texans' rushing race on Sunday, as he now has 456 yards rushing for the season. Don't get me wrong, that's still SUPER sad that an NFL team's leading rusher has fewer than 400 yards total this late in the season, but at least Burkhead is, you know, STILL ON THE TEXANS. 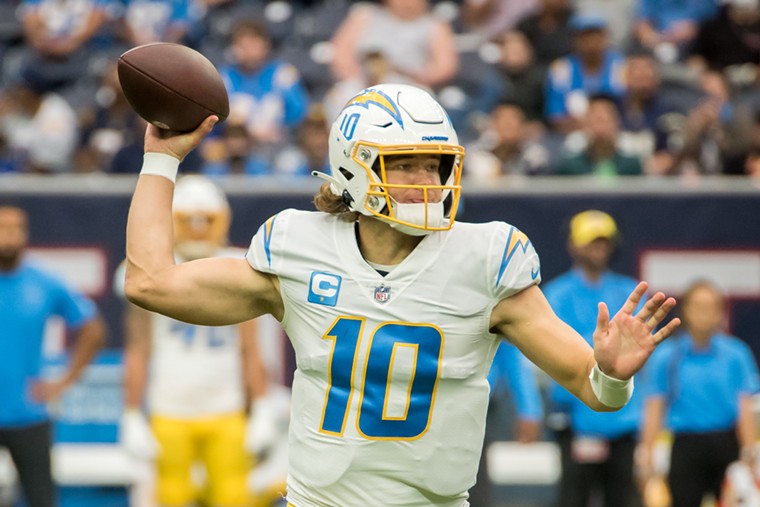 Pro Bowler Justin Herbert had some rough spots on Sunday afternoon.
Photo by Jack Gorman
1. Justin Herbert
The week started okay for Herbert, who was named the starter for the AFC in this season's Pro Bowl, no small feat considering he is in a conference with Patrick Mahomes, Lamar Jackson, and Josh Allen. That's pretty good. The week ended horrifically, however, as Herbert was thoroughly outplayed by Mills. Herbert's yardage numbers are fairly empty, as he gathered 133 of his 336 passing yards on two late scoring drives with the Chargers trailing by multiple scores. Those scoring drives were sandwiched around a pick six, and it was an early interception to Jonathan Owens that gave the Texans the football on their scoring drive that led to their 17-12 halftime lead. Herbert is good. Really good. However, on Sunday, he looked his age.