Texas House Speaker Dade Phelan let Democrats walk out in May, but might not allow a repeat in the special session. Screenshot
The special session of the Texas Legislature ordered by Gov. Greg Abbott is well underway, and lawmakers worked through the weekend filing and debating new laws that fit within Abbott’s narrowly-tailored list of conservative priority items, the only topics lawmakers are allowed to legislate on in the weeks ahead.

Seeing as what caused Abbott to call the special session in the first place was the death of Republican-backed Senate Bill 7, the controversial election reform bill House Democrats killed with a last-minute walkout in the regular session’s waning hours, it wasn’t surprising that among the first bits of new legislation filed during the new overtime session were Republicans’ latest attempts at “securing our elections.”

While Democrats have hinted that a future walkout could be in the works if they can't successfully amend or kill Republicans' new election bills, Texas House Speaker Dade Phelan has hinted he might come down harder this time around on any lawmakers who attempt to stop or slow the legislating process around voting bills.

House Bill 3 and Senate Bill 1, each chamber’s respective “election integrity” bills, were filed Thursday, and contentious committee hearings on both bits of legislation began over the weekend. The new House committee on “Constitutional Rights and Remedies” Phelan formed to consider high-profile bills during the special session voted Sunday morning to advance the House’s election bill to debate within the full House. Due to the massive number of people who came to testify against the bill, the Senate committee debating SB 1 late Saturday night adjourned until 2 p.m. Sunday, at which point the Republican-majority body was all but guaranteed to advance the Senate election bill.

Due to the quickly put together committee hearings and the clear sense of Republican unity to move fast on Abbott’s biggest priority issue, full votes on both the House and Senate elections bills could happen as soon as this week.

The swift pace at which both chambers’ GOP leaders are pushing to get the bills approved is a marked contrast with how the regular session’s election bill was put together, since Republicans’ failure then to more quickly schedule a vote on the final version of that legislation gave Democrats the leverage to coordinate their last-minute walkout which killed the bill.

In the hours of hearings on each bill in both the House and Senate, Republicans continually argued that state lawmakers have to do something to instill more faith in the electoral process following the 2020 election (without mentioning the reason so much doubt among conservatives exists in the first place is former President Donald Trump’s incessant, unsubstantiated griping that the election was stolen from him).

Meanwhile, Democrats tried to paint Republicans’ unyielding efforts to add more restrictions and roadblocks to voting within the state as thinly-veiled efforts to disenfranchise Democrat-leaning minority voters. Hundreds of Texans registered to give their opinion on both the Senate and House bills during the weekend’s hearings, the overwhelming majority of them having come out to oppose the new election restrictions they, Democrats and state civil rights groups argue will make it more difficult for poor people and Texans of color to exercise their right to vote.

Republican state Sen. Bryan Hughes, who sponsored SB 1 and was the main senator pushing the failed SB 7, argued Saturday that he and his conservative colleagues aren’t really trying to make it harder for individual Texans to vote with their slate of reforms Democrats argue are unnecessary, especially when the former Texas Secretary of State Ruth Hughes told lawmakers that the 2020 election was safe and secure.

“They’re trying to do the right thing. We want them to do that,” Hughes insisted. “The security measures in this bill, by and large, are directed at vote harvesters or folks who are trying to steal votes.”

But when Republicans and other state officials were pressed to show proof of the alleged fraud conservatives swore was the reason these bills are necessary, they couldn’t come up with much in the way of specifics.

“I don’t think we have any evidence of actual fraud,” Ingram said. He vaguely pointed to “problems involved” with drive-thru voting, “but nothing we’ve seen that rises to fraud.”

While SB 1 and HB 3 each have their own unique elements, the two bills for the most part echo the final version of the controversial election bill killed by Democrats in the regular session.

That said, there are some adjustments from the previous legislation, most notably that neither the new House or Senate bills include controversial language that would limit early voting hours on Sundays and that would make it easier for judges to overturn elections over alleged fraud, both of which were last-minute additions by Republicans during the regular session last May.

Those provisions were removed after massive backlash from Democrats, who accused the effort to delay the start of Sunday early voting to 1 p.m. as a targeted attempt from Republicans to stop “Souls To The Polls” drives, a tradition within Black southern churches where parishioners are encouraged to go out and vote after Sunday service.

Democrats were also furious about the now-removed provision in the last election bill that would have let a judge toss an election without even counting which allegedly fraudulent votes were cast for which candidate, as long as the total number of supposedly fake votes was bigger than the amount of votes that decided the election.

Like the original failed legislation, both new election bills would target Harris County by banning drive-thru voting and 24-hour voting, two voting innovations pioneered by local officials to make voting easier during the pandemic that advocates point out were used by a high percentage of Black and Hispanic voters. Both bills would also single out Harris County again by forbidding local officials from mailing out unsolicited applications for absentee ballots, which then Harris County Clerk Chris Hollins planned to do before being blocked by the Texas Supreme Court.

In addition to adding new criminal penalties for “vote harvesters,” for election workers who make mistakes on the job and for anyone who messes up when helping someone fill out an absentee ballot application, partisan poll-watchers would also be granted new authority in both the Senate and House bills. Each bill would allow “free movement” for the volunteers to move within a polling place, with the only exception being they can’t actually enter a voting booth while someone is casting a vote, an inclusion Democrats fear will lead to voter intimidation by overzealous watchers.

Both new bills include language from the previous bill requiring absentee ballot applicants to either write their driver’s license number or the last four digits of their social security number on the outside of their application envelope. They both would add language to create a correction process for mailed ballots that get rejected by review boards for things like inconsistent signatures, an addition pushed for by Democrats.

Then there are the differences: SB 1 would require the Texas Secretary of State’s office to check the statewide voter rolls each and every month with Department of Public Safety data where folks told DPS whether or not they were citizens when they got ID cards or driver’s licenses, all in an effort to make certain no undocumented immigrants are registered to vote. Last time Texas Republicans tried to do something similar in 2019, the case ended up in federal court and Republicans dropped the proposal altogether.

The House’s bill includes what advocates call the Crystal Mason provision, named after a Dallas-area woman facing prison time because she unknowingly broke the law in 2016 by casting a provisional ballot while out on probation. The language Democrats pushed for would require proof that the voters in question knew they were breaking the law when they voted illegally in order to be criminally liable.

That provision is sure to get extra attention thanks to Texas Attorney General Ken Paxton’s decision on Friday to order the arrest of Houstonian Hervis Rogers, who was allegedly told by jail officials he was eligible to vote after being granted parole, but technically broke the law when he cast his ballot on Super Tuesday in 2020, after waiting in line for six hours to vote at Texas Southern University. 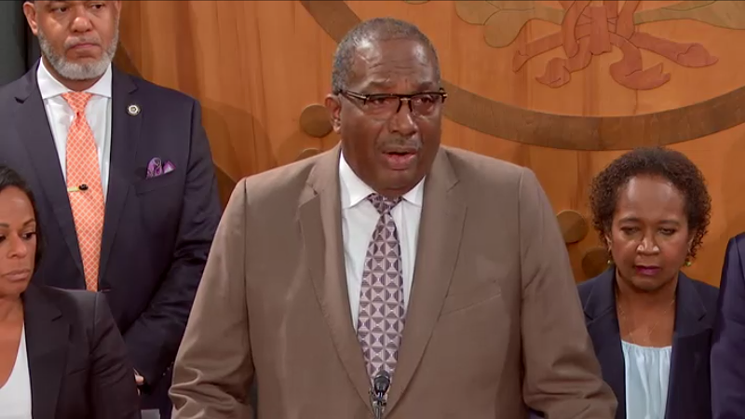 Dallas Democrat Sen. Royce West admitted Friday he didn't think Republicans would allow debate on Dems' election bill.
Screenshot
Democrats are rallying behind a counter-proposal led by state Sen. Royce West they’re calling “the Barbara Jordan Fair Elections Act,” which instead of adding new penalties and restrictions to voting would enact a list of election reforms long pushed for by Democrats including online voter registration, increasing the number of Texans who are eligible to vote by mail and making election day a state holiday.

But in a Friday afternoon press conference with his Democratic allies touting the counter bill, West himself admitted there was next to no chance his Republican colleagues in the Senate would even put the Democrat-backed bill up for debate.

“In all probability, we won’t get a hearing,” West admitted.

Democratic state Rep. Eddie Rodriguez told MSNBC on Saturday that another Democratic walkout to halt the passage of — or at least delay — these election bills they view as unnecessary could definitely be possible in the weeks ahead, if not likely.

“I think it’s hard to look at this an see any other option for us but to break quorum again,” Rodriquez said.

Meanwhile, Phelan recently hinted to Austin’s KXAN that he might not be so accommodating of a future Democratic walkout. At the end of the regular session, Phelan caught wind of the potential walkout, and told Democrats then that he wouldn’t exercise his power as Speaker to lock the doors of the House chambers or to arrest House members to force them to be present, as Texas State Troopers did in 2003 when Democrats left the state to block Republican redistricting.

“My Democratic colleagues have been quoted saying that, you know, all options are on the table, and you know, respectfully, all options are on the table for myself as well,” Phelan said Saturday.
KEEP THE HOUSTON PRESS FREE... Since we started the Houston Press, it has been defined as the free, independent voice of Houston, and we'd like to keep it that way. With local media under siege, it's more important than ever for us to rally support behind funding our local journalism. You can help by participating in our "I Support" program, allowing us to keep offering readers access to our incisive coverage of local news, food and culture with no paywalls.
Make a one-time donation today for as little as $1.