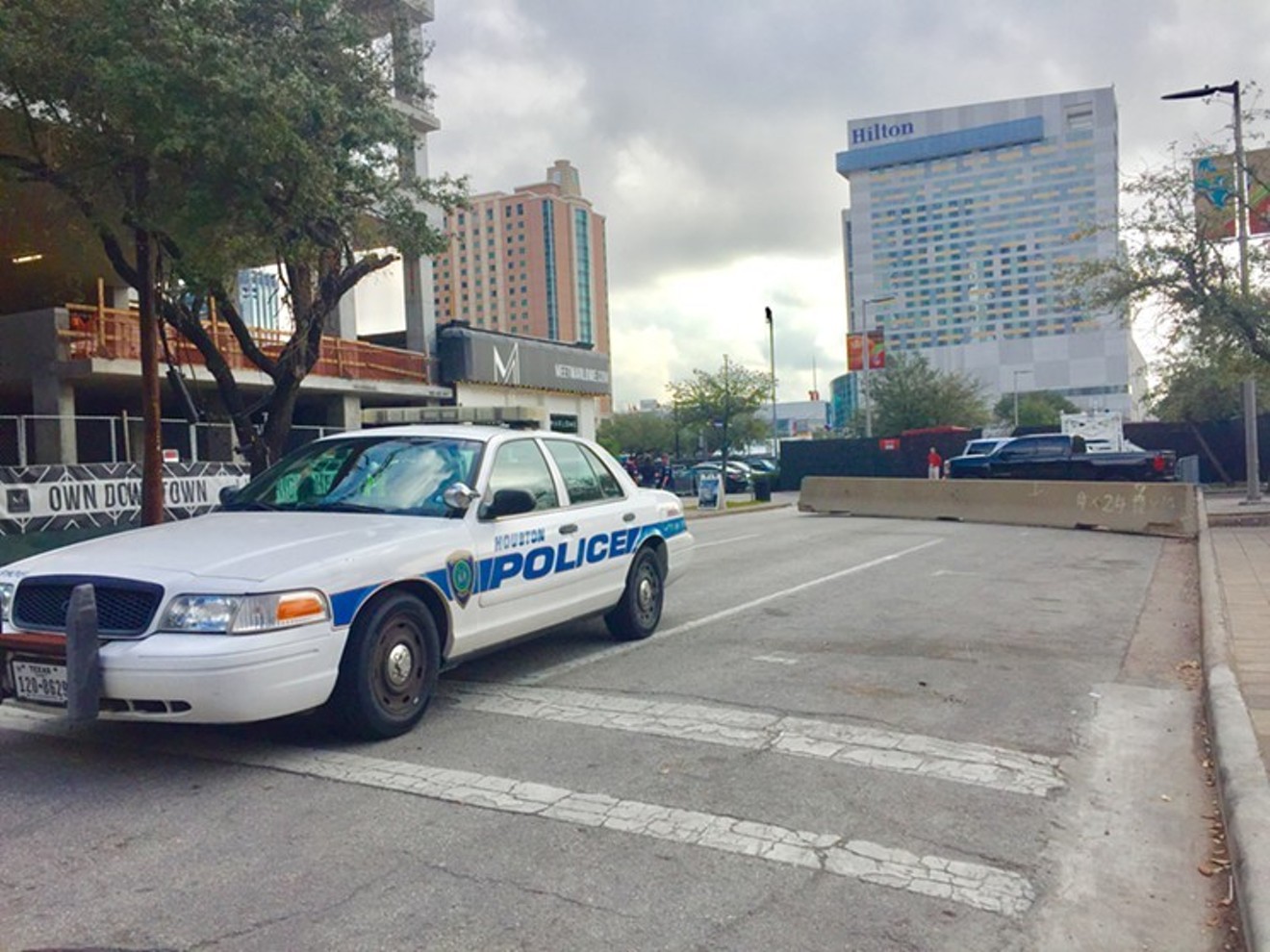 Even though Houston never said it was going to defund police, Gov. Abbott thought it was crucial to pass a bill that would punish cities that did so. Photo by Zach Despart

Even though Houston never said it was going to defund police, Gov. Abbott thought it was crucial to pass a bill that would punish cities that did so.
Photo by Zach Despart
All the commotion over Texas Republicans’ failed attempt to push through new voting restrictions in the dying days of the 2021 state legislative session was all most Austin-watchers could talk about through Memorial Day weekend. But the high-profile scuttling of Senate Bill 7 at the hands of Texas Democrats who walked off the job in protest overshadowed plenty of bills the Legislature did actually manage to get approved in the final week of Austin lawmaking (ahead of an impending special session, that is).

Joining the conservative bills banning abortions after six weeks and allowing permitless carry of handguns that passed in weeks prior, Republican lawmakers in the state House and Senate approved several other bills on red-meat, right-wing priorities during the last week of the session.

Two of those bills will make it tougher for Texas cities to cut local law enforcement budgets or reallocate funding away from police to other city services. One of them, House Bill 1900, freezes the property tax revenues for cities with more than 250,000 people that defund their police forces. It also blocks those cities from annexing nearby areas for ten years post-defunding, and allows the state to withhold those cities’ sales taxes for a special Texas Department of Public Safety fund “to pay for the cost of state resources used to protect residents of a defunded municipality.”

The other police funding bill, Senate Bill 23, would freeze the property tax revenues of counties with more than one million residents if those county governments reduce law enforcement budgets without getting approval from county voters.

Gov. Greg Abbott signed those two bills into law Tuesday, thanking the state lawmakers who supported them “for making sure Texas remains a law-and-order state.”

“Efforts to defund the police are downright dangerous, and these laws will prevent cities from making this reckless decision,” Abbott said during the bill signing ceremony.

Abbott announced back in February that preventing Texas cities from defunding police was one of his “emergency items” for the session. While the Austin City Council’s decision to shift some police funding to other agencies in late 2020 sent blue-backing Republicans into a frenzy, other major Texas cities like Houston and Dallas never planned to follow Austin’s lead, and state Democrats denied that their party was pushing for any sort of mass police defunding.

Other bits of right-wing legislation whose recent passage got lost in the shuffle include a bill banning any government official from closing places of worship during future disasters (including deadly pandemics), and a “trigger-law” that would immediately ban abortion outright in Texas in if the U.S. Supreme Court overturns Roe v. Wade.

And while several conservative bills Lt. Gov. Dan Patrick named as his top priorities ultimately died in the House — like the one targeting transgender girls who want to play girls sports and another that would have banned social media companies from blocking Texans for right-wing views — he did succeed in pushing through Senate Bill 4, which requires any pro sports team in Texas that gets funding from the state to play the national anthem before games.

A handful of other bills passed by the Legislature’s Republican majorities in the House and Senate cut some antiquated booze regulations and extended health benefits for poor moms and would-be medical marijuana patients, just not to the extent many folks had hoped for.

Take House Bill 1518, which will get rid of Texas’ ban on buying beer and wine before noon on Sundays. On its face, that’s sure to thrill any Texan who’s forgetfully tried to throw in a six-pack or a bottle of chardonnay with their Sunday morning grocery haul. But ultra-early birds would still be barred from making those purchases, as the bill would still prohibit booze sales before 10 a.m. on the Lord’s Day.

Then there’s House Bill 133, the bipartisan-backed legislation to expand post-birth health coverage for low-income Texas moms through Medicaid. Currently, Texas moms on Medicaid have their pregnancy-related medical costs covered for two months after delivering a child, but the final version of HB 133 expands that coverage to last a full six months post-pregnancy.

It’s a significant extension, but the House’s original version of the bill — which was supported by several Republicans including Speaker Dade Phelan — would have extended the Medicaid benefit to last 12 months after birth. The state Senate thought an extension that long would potentially be too expensive, so six months was the compromise the two chambers reached.

The Legislature also expanded the state’s medical marijuana program, albeit not as significantly as marijuana advocates wanted. Passed by both the House and Senate last week, House Bill 1535 will let Texans with post-traumatic stress disorder and cancer access legal marijuana prescribed by a doctor if signed into law.

House Bill 1535 will let Texans with post-traumatic stress disorder and cancer access legal marijuana prescribed by a doctor if signed into law.

Jax Finkel, executive director of Texas’ branch of the National Organization for the Reform of Marijuana Laws, was glad to see the legislature allow those two groups to use marijuana to treat their conditions, but was frustrated that the Senate refused to accept the House bill’s inclusion of chronic pain sufferers who might otherwise need opiates for their conditions as another group who could access legal weed.

She was also less than thrilled that instead of bumping up the legally allowed concentration of THC (the psychoactive chemical in marijuana) in Texan medical pot from 0.5 percent to 5 percent as the House originally advocated, the Senate only approved increasing the allowed THC concentration to 1 percent.

“While these are extremely important changes, Texas NORML is saddened to see such integral elements removed from the legislation by the Senate,” Finkel said in a statement, “such as the addition of chronic pain as a qualifying condition, the ability for a review board to approve new qualifying conditions, as well as a new THC cap of 5 percent.”

The Lege also passed two largely unheralded bills covering rural internet service and Gulf Coast hurricane preparedness that both got widespread bipartisan support just before the session’s end. House Bill 5 will create a new state office to increase access to broadband internet in underserved corners of Texas and to entice companies to build out broadband infrastructure with low-interest loans and grants.

Senate Bill 1160 will create the Gulf Coast Protection District, a new government entity covering coastal counties that will be able to raise money for the “Ike Dike” storm surge barrier through bonds, taxes and other fees (with voter approval). That new entity would also be able to manage any federal funds Congress might provide for the project in a future infrastructure spending bill, which should hopefully help speed that hurricane defense effort along once the Army Corps of Engineers publishes a report on the project in a few months.

Abbott has already vowed to call the Legislature back into town at an unspecified future date. The governor gets to call the shots about what lawmakers can work on in an overtime special session, and he’s already named “election integrity” and bail bond reform as his two top priorities.

He could also throw in more common sense initiatives that could garner bipartisan support such as the broadband access and the Ike Dike management bills, but given how furious Abbott is that Democrats killed the GOP voting bill, progressives and moderates probably shouldn’t get their hopes up.
KEEP THE HOUSTON PRESS FREE... Since we started the Houston Press, it has been defined as the free, independent voice of Houston, and we'd like to keep it that way. With local media under siege, it's more important than ever for us to rally support behind funding our local journalism. You can help by participating in our "I Support" program, allowing us to keep offering readers access to our incisive coverage of local news, food and culture with no paywalls.
Make a one-time donation today for as little as $1.