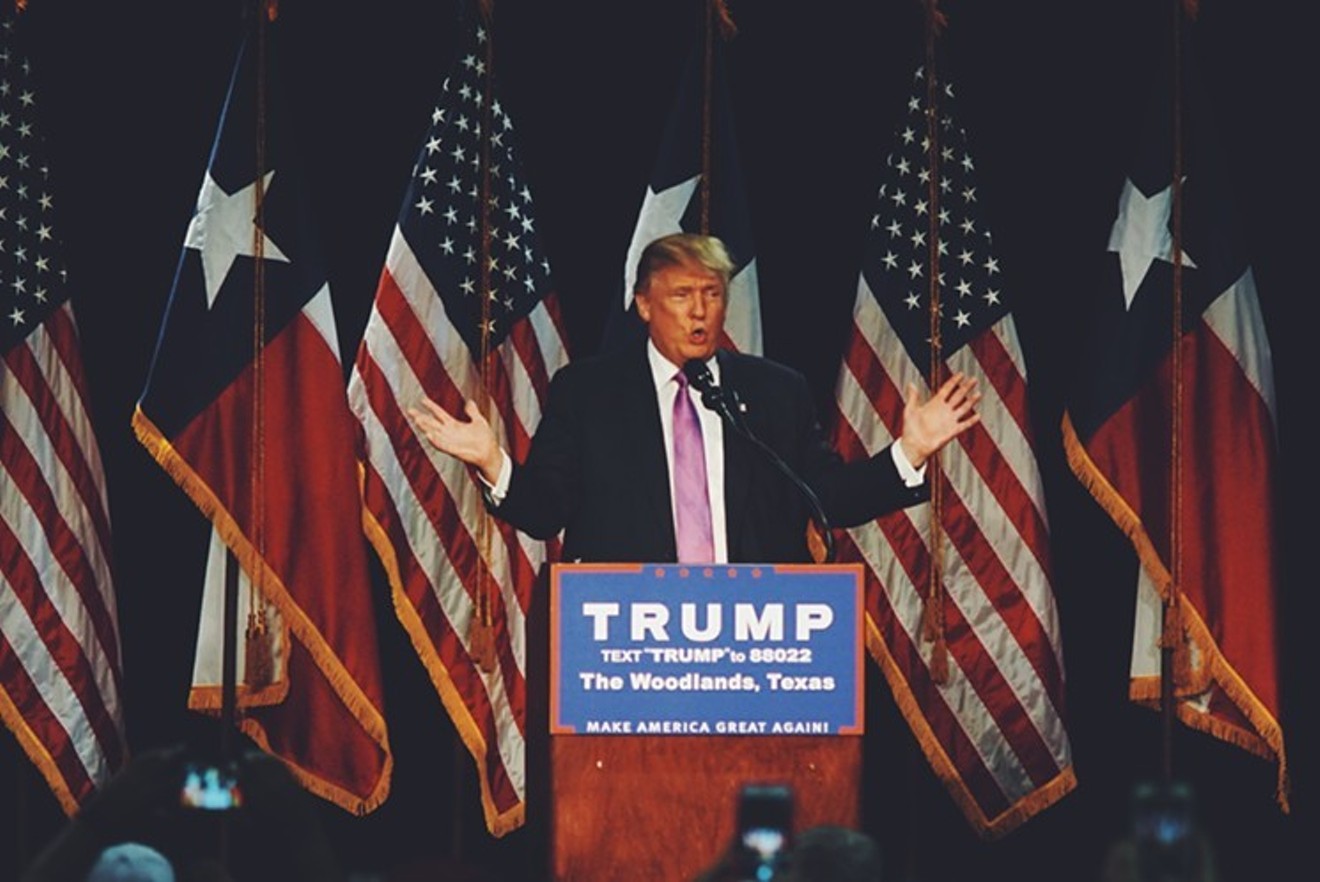 Andy Ternay is not a fan of our president. Photo by Marco Torres
Andy Ternay, a bearded blacksmith from Garland, went to brunch on Sunday wearing a shirt displaying the words, “Fuck Trump.” Employees at First Watch in Richardson, TX asked him to leave and someone even called the police. That same day, Ternay made a post on his Facebook account that went viral.

Ternay begins his long account of the meal that wasn’t meant to be with the words, “Adventuresome morning today!”

The post includes a photo of Ternay wearing the shirt at a table with a menu in hand. The front of it displays the words, “FUCK TRUMP AND FUCK YOU FOR VOTING FOR HIM.” This is the same phrase Karen Fonseca had on her bumper sticker. Another photo shows the back of Ternay’s shirt, which has an image of an obscene hand gesture involving the middle finger. It also displays the words, “FUCK THE RACIST ALT-RIGHT.”

Ternay explains that a manager told him “customers were distressed by his shirt and that children might see it.” Ternay responded by letting “her know that explaining ‘grab ‘em by the pussy’ and golden showers to my daughter was equally unpleasant.”

Ternay claims that “a Latino woman” and “two African-American workers” told him they liked his shirt. He explains that after he and his partner placed their orders and received their drinks another employee, “one of
the cooks,” asked them to leave. He notes that “one table of white people” applauded as they left.

He also claims that “one of the African-American servers” decided to quit his job over the incident and told them, “You should hear these people asking not to be seated near Muslims.”

He also claims that “one of the African-American servers” decided to quit his job over the incident and told them, “You should hear these people asking not to be seated near Muslims.”


Richardson police arrived as he was leaving around 11:30 a.m., but Ternay says he refused to identify himself. He also cited Cohen v.California, the 1971 United States Supreme Court freedom of speech case that
overturned a man’s conviction for disturbing the peace by wearing a jacket with the phrase, “Fuck the Draft.”

“If your kids can’t handle the words ‘Fuck’ they are going to have a really tough time in this world,” Ternay wrote. He also decried the treatment of “Muslims and people of color, LGBTQ, and women.”

He explains that “white males sneer” at his shirt, but “people of color” smile and give him the thumbs up. “I think it is very worthwhile to let people of color know they are not alone,” he writes, “that some whites also
see the evil of racism is resurgent – and we will fight with our brother and sisters of color against it.”

“I’m fine with being asked to leave and I don’t urge a boycott,” Ternay adds. “These things are never easy for businesses.”

Ternay’s account of the incident posted on his FB account at 12:57 p.m. on Sunday and quickly went viral. By Monday afternoon, the post had been shared more than 125,000 times. Thousands of comments ranged from approval and praise to insults and threats. By Monday evening, Ternay’s FB account disappeared.

In a statement to the Fort Worth Star-Telegram, First Watch explained that the problem was with the profanity, not the politics. A spokesman for the restaurant chain declined to confirm whether or not any employees
agreed with Ternay or resigned.