Carlos Correa got an emotional ovation (and hit a homer) at what is likely his last regular season game in Houston. Photo by Jack Gorman
click to enlarge 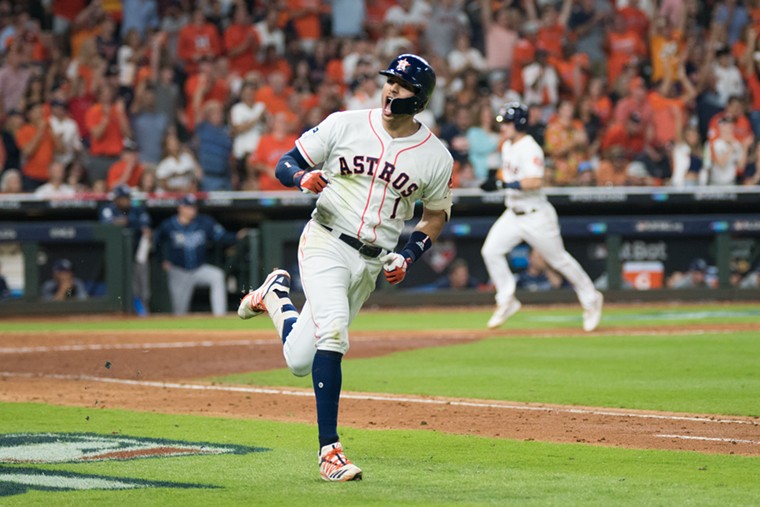 Carlos Correa got an emotional ovation (and hit a homer) at what is likely his last regular season game in Houston.
Photo by Jack Gorman
The Astros clinched the division and home field advantage over the weekend. Carlos Correa capped an emotional final game with a home run and a massive sendoff from the fans. Kyle Tucker notched his thirtieth homer of the season. And Yuli Gurriel sealed his first ever AL batting title with a walk off single in the bottom of the ninth.

It was a wild and fitting conclusion to a surprising and tumultuous season for the Astros with lots of numbers to reflect that. Back in April, we wrote about five key numbers for the Astros to be successful this season. Let's take a look back at those and a look at a few other numbers that stick out from a memorable 2021 so far.

As we said in the article, "No pitcher on the Astros staff has higher expectations and greater pressure to perform than the young right-hander who just signed a new five-year extension." McCullers came through with his best season as a pro including the most innings pitched by a mile and a 3.16 ERA, best for third among AL starters. Given the question marks surrounding the young right hander, this was an incredibly important season and one that hopefully will be a springboard not only for this postseason but for many other great seasons to come.

Correa is in a contract season (more on that to come) and the #PaytheMan hashtag was all over Twitter Sunday in response. Undoubtedly, Correa had a big year not only at the plate, but with his always stellar defensive play at short. He didn't quite hit the target we wanted to start the season, but his overall play and, more importantly, his consistent health for a full season was more than enough to make him one of the most valuable Astros in 2021. How valuable? We'll see...

After Javier's shaky start, he was moved to the bullpen as a long reliever, so this was never destined to be right, but in reality, this was about the back end of the pitching rotation. For this season, it was Urquidy (107 innings pitched) and the surprising Luis Garcia (155 innings pitched). The rookie phenom more than made up for the loss of Javier and brings yet another young arm into what once felt like an aging and troublesome rotation. If Javier can reclaim some of his rookie magic, this is a team now with four legit young starters (McCullers and Framber Valdez) going forward.

Like McCullers, few doubted Alvarez could be great over an entire season, but more than a few wondered if he could actually make it through an entire year. With 33 homers and 104 RBIs in his first full season in the majors, he crushed those doubts and proved he can not only really swing the bat, but he can play some outfield as well. He will remain yet another valuable young talent on a team that has plugged holes with good youngsters all season long.

It's understandable to think the Astros might have lost a little luster after the COVID-shortened train wreck of a season, the loss of George Springer and the first chance to play in front of packed stadiums after the sign-stealing scandal. But, if anything, it only made this team more determined. What started as a shaky rotation turned into a strength. The team led baseball in most offensive categories and was at the top of the league in defense as well. We hope you betted the over.

Gurriel, 37, became only the sixth player in major league history to win the batting title at his age or older. He is only the second Astro (Jose Altuve) to accomplish that feat. In his last at bat of the season, he singled home the game winner. Since joining the Astros, he has been nothing short of a great hitter and he's on the short list for the Gold Glove awards this season as well with his tremendous defensive play at first base, something few imagined when he first arrived. It's a fantastic story for La Piña and the team.

3
The number of Astro players to hit 30 home runs at 24 or younger.

Alex Bregman did it. So did Yordan Alvarez (now, twice). This year, it was Kyle Tucker's turn. Tucker, like Bregman, took some time to develop his stroke after reaching the bigs, but once he adjusted, he began crushing. He finished 2021 with 30 homers and 92 RBIs with a .294 average, slugging .917. He and Alvarez have quickly emerged as the young nucleus of this ball club.

10
Years: Reportedly the number Carlos Correa wants for his contract.

Not to sour Correa's final regular season game at Minute Maid, but there is a reason for all the pomp and circumstance. This is not about how cheap the Astros are. It is about the years Correa wants, reported 10 years and close to $300 million. The Astros might paying a per-year amount close to that, but not for 10 seasons. With young players due plenty of money in the decade ahead, it's simply a time frame they cannot do unless fans are willing for the team to part with other young pieces of the team to pay for it.

11
Number of wins the Astros need for another championship.

Setting aside what will happen in the offseason, it's time to focus on the playoffs. They start Thursday against the White Sox. Let's go!
KEEP THE HOUSTON PRESS FREE... Since we started the Houston Press, it has been defined as the free, independent voice of Houston, and we'd like to keep it that way. With local media under siege, it's more important than ever for us to rally support behind funding our local journalism. You can help by participating in our "I Support" program, allowing us to keep offering readers access to our incisive coverage of local news, food and culture with no paywalls.
Make a one-time donation today for as little as $1.