Where the Boos Are: The Five Toughest Places to Visit for the Astros in 2020 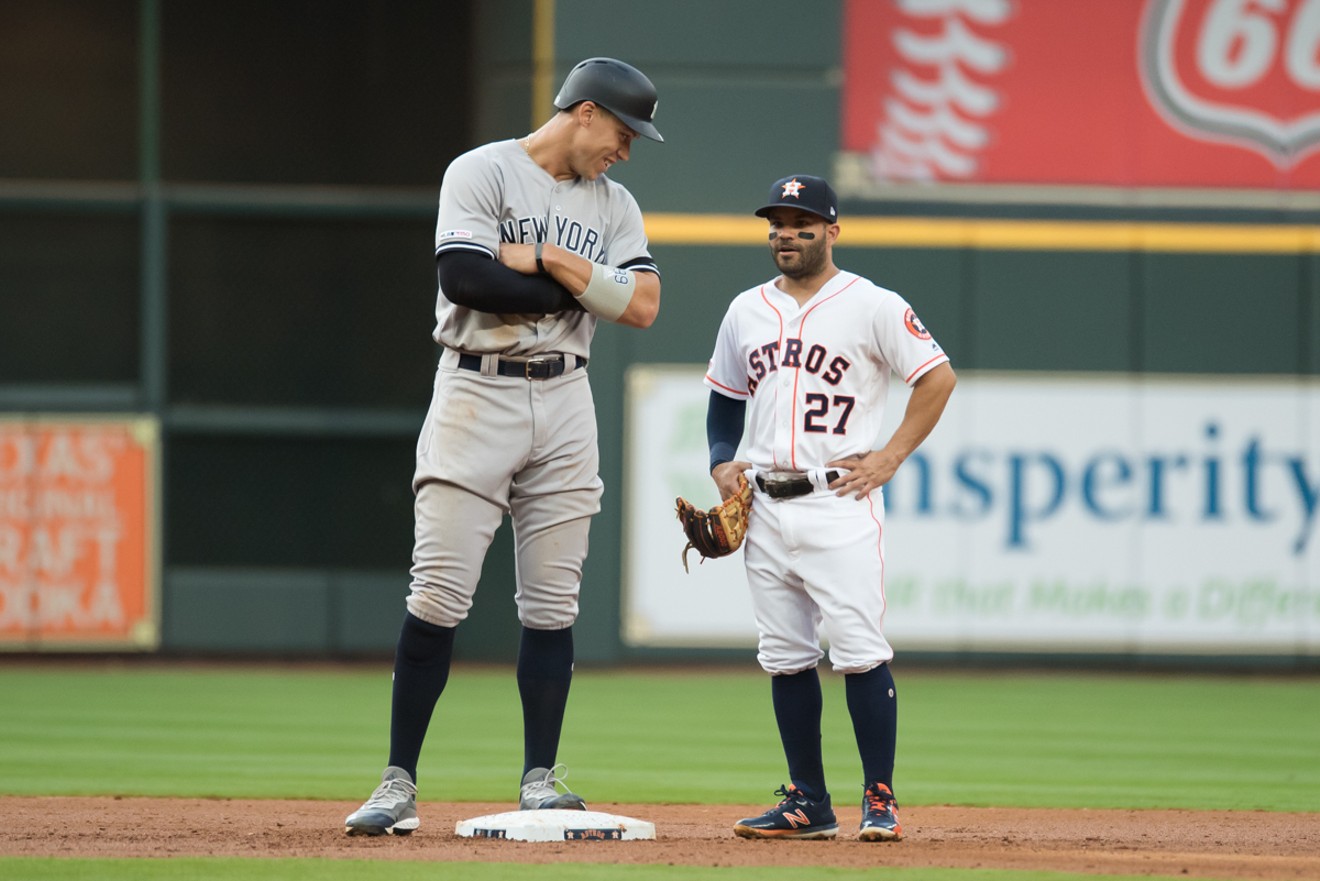 Aaron Judge (left) thinks Jose Altuve stole the 2017 MVP. Wait until the two meet in New York this year. Photo by Jack Gorman
The Astros have already been hearing it from fans in Spring Training. As pitches come to the plate, shouts of "fastball," "curve" and even banging sounds emanate from the crowd. The team knew it was coming and as it has lessened slightly throughout the preseason, once regular games get underway, they won't be safe outside of the confines of Minute Maid Park.

But, where will it be the worst? To be sure if they were playing an away game against the Dodgers, they might need the secret service to protect them. Fortunately, that wouldn't happen until the World Series if it were to happen at all — imagine that matchup for a second. Still, there are plenty of places where the fans will not be hospitable, some much worse than others.

Trevor Bauer, who is about as hated as any non-former-Astros player in franchise history, is gone, but Mike Clevinger has been outspoken in his belief that Houston deserved worse punishment, even calling the players "pieces of shit" in an interview. Given that they were swept by the 'Stros in the 2018 ALDS, expect an interesting series when the Astros visit Cleveland from fans and opposing players, particularly Clevinger, who better hope he has his best stuff on the mound against the Astros lineup.

The central nexus of the entire sign-stealing controversy resides with the A's: Mike Fiers. Fans seem to have embraced his heel turn, but it remains to be seen if that will be popular among other baseball players. Certainly, the first time he pitches in Oakland against the Astros, the fans are going to be raucous. Add in the fact that, well, it's Oakland, and you have the makings of a pretty nasty environment.

No team hates the Astros as much or is as hated by the Astros as much as the Texas Rangers. Nevermind the built-in state rivalry between Houston and Arlington Dallas, forcing the Astros to play a home game in Tampa after Hurricane Harvey has never sat well with players or fans in Houston. Now, with the scandal of cheating looming, it casts a different light on that entire season and no doubt Rangers fans are ready to rub it in. It should only be amplified by the introduction to Globe Life Field, the Rangers brand new ballpark opening this spring.

Division rivals always have some degree of animosity, particularly a team like the Angels that has really struggled behind the Astros the past few seasons. But, when you factor in the fact that they are in Los Angeles, the intensity of series in Anaheim will definitely be ratcheted up. Don't be surprised to see Dodger fans in the stadium since the Astros don't visit Dodger Stadium this season. Certainly, there will be a contingent of angry fans around the ballpark. It will absolutely be noisy.

Let's be honest, nowhere is there going to be a more nasty and brutal crowd than in the Bronx. The New York fans are already some of the most outspoken and vitriolic in baseball and when the Astros, not just a heated conference rival but a team they believed cheated them out of a shot at yet another World Series, rolls into town, it is going to be ugly. Making matters worse, the only Astros visit comes in the penultimate series of the year in what is certain to be a wild postseason race.
KEEP THE HOUSTON PRESS FREE... Since we started the Houston Press, it has been defined as the free, independent voice of Houston, and we'd like to keep it that way. With local media under siege, it's more important than ever for us to rally support behind funding our local journalism. You can help by participating in our "I Support" program, allowing us to keep offering readers access to our incisive coverage of local news, food and culture with no paywalls.
Make a one-time donation today for as little as $1.