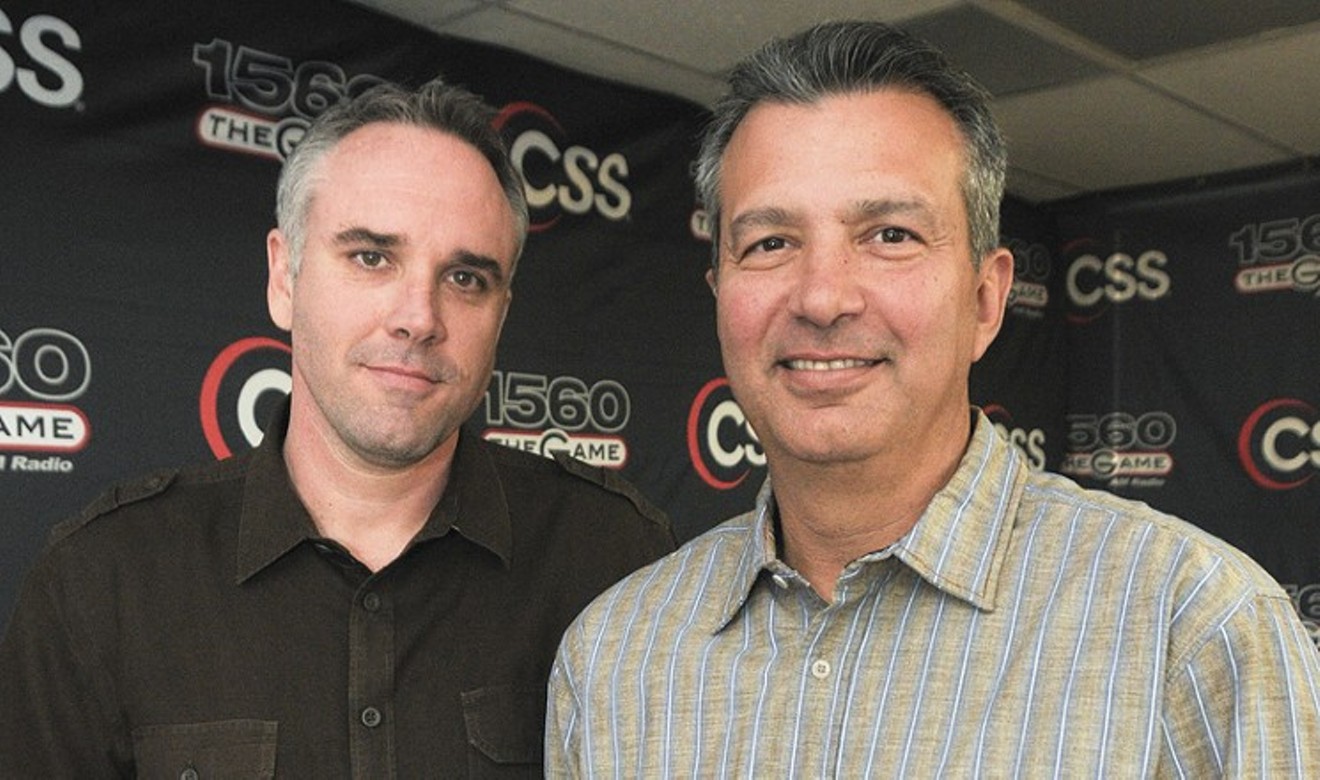 Lance Zierlein and John Granato, the most respected team in Houston sports talk radio history, rejoined forces late last year. The repairing of Zierlein and Granato is but one of many moves of late on the Houston sports talk radio airwaves. Photo by Jeff Balke
As major cities go, Houston is relatively sleepy with regard to its diehard sports fandom. Sure, people get up for the Texans, and the Rockets and Astros draw in the playoffs, but on the whole, the city doesn’t compare to big-city brethren like Philadelphia, Chicago and Boston on the sports craze scale.

This can be attributed to any number of things. The size of our city. The fact that many Houstonians, including yours truly, aren’t from Houston, meaning our sports allegiances likely lie elsewhere. Great weather. Plenty else to do. The list goes on.

That said, despite all this, Houston doesn’t lack for local sports talk. Hell, the market boasts three major affiliates in AM 790, AM 610 and FM 97.5 (SportsMap also boasts 94.1 FM, but that station is still a work in progress, and some of the content is shared with 97.5). Sure, the ratings don’t’ exactly measure up to markets in the Northeast or Midwest, but the Houston sports radio market features more than enough talent.

In recent months, much of that talent has been on the move. Some have changed stations. Some have been promoted, others demoted. Some fired, others suspended. For such a passive sports city, the behind-the-scenes goings on in the local sports talk radio market are anything but. Let’s take a look at some of the more recent happenings in the Houston sports talk scene.

CHANGES AT 610 KILT (610 AM) should be the local sports talk radio behemoth, seeing as it serves as the flagship station of the Texans, aka the biggest game in town. But that hasn’t been the case of late. Ratings have lagged; the station's most popular program - the Triple Threat afternoon show, hosted by (Houston Press contributor) Sean Pendergast, Rich Lord and Ted Johnson, the lone show on 610 unaffected by the changes noted below, was the fifth highest-rated sports talk radio show in Houston for the March 29-April 25 ratings book, and 610's morning show placed third behind both 97.5 and 790. In an effort to bolster ratings and turn the tide, 610 powers-that-be recently made a number of changes. Cody Stoots was ousted from his mid-afternoon show alongside John Lopez, replaced by morning show producer Landry Locker and former 610 personality Fred Davis. The real impact, however, was felt with the move of Paul Gallant from his solo evening gig to the morning drive show, alongside current hosts Mike Meltser and Seth Payne. This will be beneficial to 610 in two ways. One, Gallant is a strong talent, a younger guy with nice delivery and plenty of opinions, a personality in need of showcasing. Two, the morning show team of Meltser and Payne needed some juice, and Gallant will help provide plenty of that.

THE FEUD THAT SHOOK 790
This story is long, and has many twists and turns, but bear with us. Josh Innes, formerly of 610, returned to Houston from Philadelphia when he joined KBME (790 AM) in late 2016. Adam Clanton, who had already appeared on a number of local sports talk stations and as a TV anchor by that time, was already in place at 790. Things started out well enough. The two were complimentary of one another on-air and on Twitter. All seemed well. Until it wasn’t.

Innes makes no secret of his affinity for Oklahoma City guard Russell Westbrook, so it was no surprise that he donned a Westbrook T-shirt last year. By Innes’ account, he texted the picture to Clanton – who, it should be noted, works a side job as a Rockets radio analyst – who then forwarded it to someone in the Rockets’ power circle (790 is also the Rockets’ flagship, which only muddied the waters further). Innes responded on-air, and the two traded digs – some subtle, others not – on-air in the months that followed.

Fast forward to this year’s Super Bowl Radio Row in Minneapolis. Innes, in a bit that certainly earned news coverage, had producer Jim Mudd walk over to the pair’s former 610 colleagues, Mike Meltser and Seth Payne, and stir things up a bit. Payne didn’t take kindly to this and an on-air screaming match erupted between he and Innes. By the time the dust settled, the entire 790 crew had been kicked off Radio Row, Innes relocated to a Minneapolis-area Perkins for his broadcast, and Clanton and his Bottom Line afternoon mates broadcast from their hotel room. Clanton and co-host Jayson Braddock were upset at being kicked off Radio Row, while Innes argued that the dust-up with Payne led to increased publicity for the station.

We’re not done. A month ago, Clanton retweeted an old Tweet in which Innes questioned the Texans’ selection of J.J. Watt in the 2011 NFL Draft. Watt has since become one of the most prominent players of his era, which Innes acknowledged when admitting that his initial impression of the Watt pick was off-base. However, he didn’t care for Clanton’s online troll job and let it be known in another on-air rant. Officials at 790 apparently agreed, as they parted ways with Clanton soon thereafter and suspended Innes for the remainder of the week.

Now, there is no definitive right or wrong in this particular feud. On one hand, Clanton shouldn’t have sent the Westbrook picture to Rockets management, nor should he have continued with the subtle jabs – both on-air and online – directed at the new face of Sports Talk 790. Innes, meanwhile, got in his fair share of Clanton digs, and the Radio Row incident – while a news generator – wasn't a particularly good look.

Admittedly, I’m a fan of both Clanton and Innes. And having met both in person on several occasions, both seem like genuinely good guys who simply couldn’t coexist within the confines of 790. In the end, a choice had to be made. Station officials, in my estimation, sided with the right on-air personality. It’s unfortunate they had to make a choice at all.

LOCAL LEGENDS REUNITE
When Lance Zierlein left 790 last year, some speculated he wouldn’t be off the air for long. Those suspicions were confirmed when Zierlein joined ESPN 97.5 in November, reteaming with John Granato and reforming the most storied sports talk radio pairing in Houston history.

Zierlein and Granato team up for The Bench every weekday from 7-9 a.m. and Zierlein also guests on Granato’s other morning show with Del Olaleye and Raheel Ramzanali. Things aren’t quite the same as they were back in the duo’s prime at 610 and 1560. The two still have that same chemistry from back in the day, but Zierlein is clearly more invested in his work for NFL.com, and the same can be said for Granato and his affinity for the golf course.

That said, there’s a certain comfort in the legendary duo rekindling its on-air escapades for the third time. Here’s hoping they stay a while.
KEEP THE HOUSTON PRESS FREE... Since we started the Houston Press, it has been defined as the free, independent voice of Houston, and we'd like to keep it that way. With local media under siege, it's more important than ever for us to rally support behind funding our local journalism. You can help by participating in our "I Support" program, allowing us to keep offering readers access to our incisive coverage of local news, food and culture with no paywalls.
Make a one-time donation today for as little as $1.