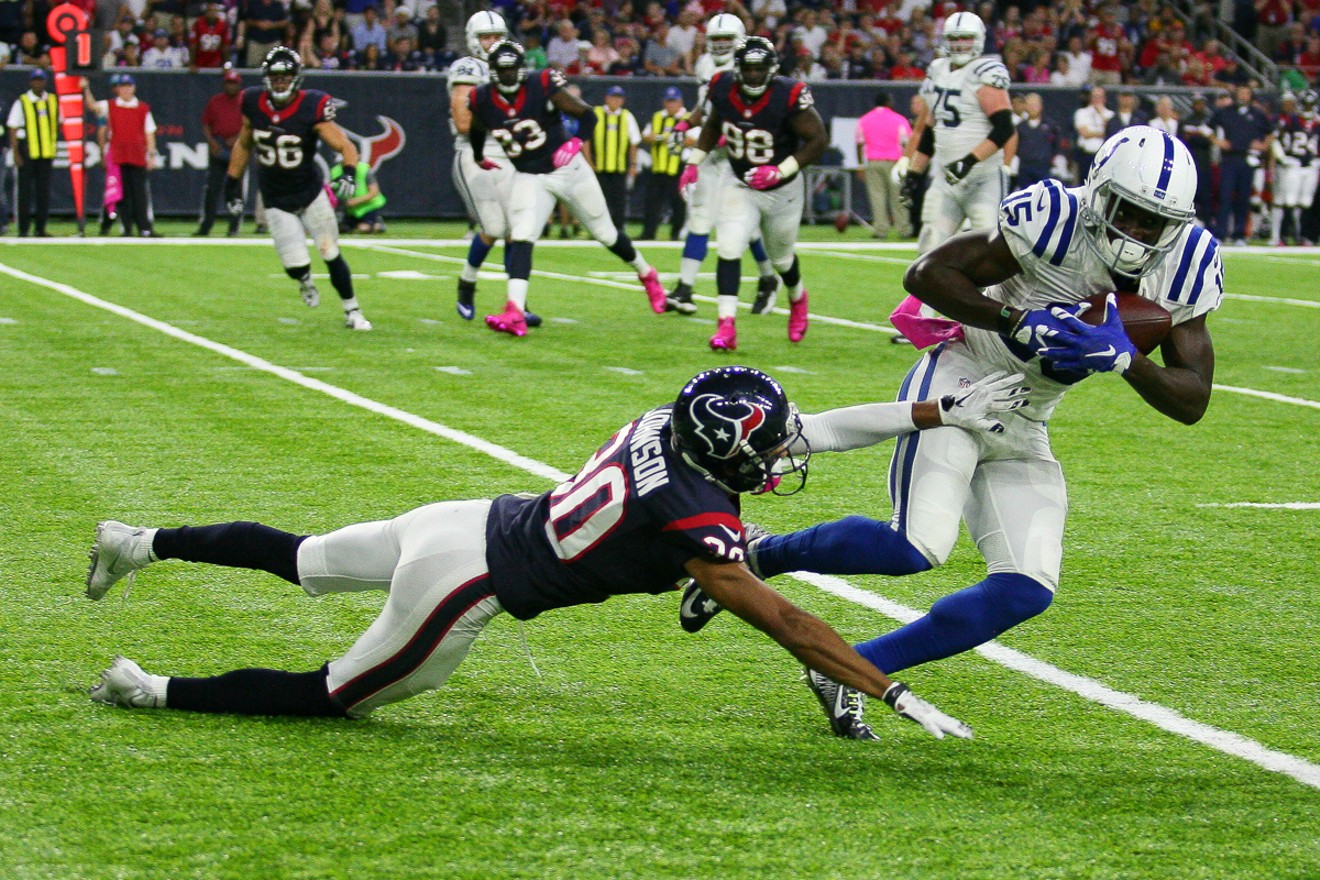 Kevin Johnson is one of numerous Texans who have some serious soul searching to do this offseason. Photo by Eric Sauseda
As the fourth quarter clock slowly churned down in the fourth quarter of yesterday's 22-13 Texans loss to the Indianapolis Colts, the Texans were huddled up for a third down. That huddle included the following players — wide receivers Braxton Miller and Chris Thompson, tight end Stephen Anderson, quarterback T.J. Yates, and an offensive line that, left to right, went Julien Davenport, Xavier Su'a-Filo, Greg Mancz, Chad Slade, and Breno Giacomini.

In other words, the Texans were fielding a team on offense full of players who were undrafted, forgotten, waived, young, raw, bad, horrible, ill-equipped — pretty much any negative career tag or adjective you could use to describe a player, they were represented in the band of misfits with whom the Texans were trying to score go-ahead points in the fourth quarter.

And as they inevitably failed on that third down, all I could think was "Thank God, the season is over." A season that was showing so much promise with Deshaun Watson under center ended with T.J. Yates throwing a meaningless (but highly symbolic) interception to end the season, as the Texans finished 2017 with a 4-12 record that was as ugly as the numbers read, save those six magical starts from Watson.

Now, we turn our attention to the only Texans story that matters — the power struggle between head coach Bill O'Brien and general manager Rick Smith, which we now have clarity on, although it's under a sad cloud of medical issues for Smith's wife. More on that in a moment, but let's get to this weekend's winners and losers:

4. Frank Gore
Late in Sunday's game, Gore became just the fifth player in league history to pass the 14,000 yard mark, which is an impressive accomplishment (that I wish didn't have the life sucked out of it by the CBS announce team mentioning the chase for it for what felt like every ten minutes or so during the broadcast — we got it, guys... Frank Gore's a nice back). Gore's case for the Hall of Fame is going to be very interesting, because I think there are hardcore football fans who had no idea before this season just how high up the all-time rushing list Gore is. He's been the model of durability (started all 16 games for six straight seasons) and consistency (at least 960 yards in all but two of his thirteen seasons in the NFL). He had one great postseason, averaging 106 yards per game in the Niners' run to a Super Bowl in 2012. However, he was second team All Pro once (2006), never a first team All Pro, which means he was rarely, if ever, one of the four best backs in the league, at any given time. What's your favorite Frank Gore moment? (The answer is "There was one?") My code for the Hall of Fame — a window of being among the absolute best at what you do, a few signature moments — does not fit Frank Gore. But hey, congrats on 14,000 yards!

3. The internet
James Harrison found a way to get himself cut in Pittsburgh and signed by the hated New England Patriots. Hell, he even had two sacks in Sunday's game against the Jets. Thankfully, the internet was able to interpret this previously unfathomable moment — James Harrison playing for the team he called "cheaters" back in 2004 — through a WWE video analogy....


My dislike for the #Patriots is documented. But this is so good. pic.twitter.com/RIEfteQGbw

2. Texans' 2018 schedule
In theory, we all hate to see our favorite team lose, especially in seasons where their first and second round draft picks are owned by the Cleveland Browns. There is virtually no draft-related reason to be rooting against the Texans, like there was in 2014 when the first overall pick would net Jadeveon Clowney. However, one consolation prize from the Texans' losing to the Colts on Sunday is they are officially the last place team in the AFC South, so they will play a last place schedule. In plain English, this means they will catch the Broncos in Denver and the Browns at home, instead of a road game in Oakland and home game against the Bengals.  Any scenario that involves playing the Browns is the optimal scenario. (YAY! WAY TO GO, O'BRIEN!)

1. Bill O'Brien
Given the dark turn that the O'Brien-Smith standoff took yesterday, it feels a little unsavory slotting anything to do with this story under "Winner" or "Loser" in this article. Please note that I've acknowledged this. So anyway, right after the game yesterday, we received this announcement from the team:

On paper, it will read that general manager Rick Smith took an extended leave of absence to help tend to the needs of his wife Tiffany and their family as she undergoes treatment for breast cancer — that will read as the reason Smith was ultimately replaced as general manager of the Texans. As someone who lost his mother to breast cancer and watched my dad care for her for three years before she passed, I can attest that it's an absolutely brutal ordeal, regardless of where in the process of fighting it Smith's wife is, so I tread lightly when it comes to examining the curiosity of the timing of Smith's announcement. Certainly, there are skeptics out there noting Smith may have been about to get demoted, and now he steps away without a demotion or termination. To those skeptics, I would say it's just as plausible that Smith was waiting for the season to end to make this public, so as not to distract from the regular season (horrific as it may have been), and that now, with a GM's busy season upon us (draft, free agency), Smith knows he can't fulfill the obligations of an NFL GM's job. That's a reasonable scenario.

I guess my point is, other than hoping like hell that Tiffany Smith beats cancer, it doesn't really matter HOW we arrived here — incredibly, we've arrived at what seemed like an impossible scenario, a Texans franchise with Bill O'Brien on the cusp of a contract extension and likely input on a new general manager. Regardless of how we arrived here, I think the Texans are better positioned for the future now than they were two days ago. Look, Bill O'Brien is far from perfect as a head coach, and the pressure will and should be turned up big time on him now that he will have a GM who is far more "his guy" than Smith was. However, any decisions Bob McNair is making should be made with Deshaun Watson at the forefront of the reasoning, so with that said, the facts are this —-

(b) Smith was going to be tasked with fixing a rickety roster around Watson by using middle and late round picks and oodles of cap space, assets he has historically deployed fairly poorly as the GM of the Texans.

Certainly, a case could be made for replacing both Smith and O'Brien, and depending on whom they hired to replace O'Brien, I could be talked into that. But if it was going to be one or the other getting pushed aside, Smith had to go.

4. The NFL concussion protocol
Remember that concussion incident with Tom Savage against the 49ers three weeks ago? Feels like three months ago, I know. Well, the NFL and NFLPA have finished their investigations into just how a player who was convulsing on the field like he was having a seizure after a hit wound up back under center about five minutes later. Here's what they came up with:


Joint statement from NFL & @NFLPA says medical personnel followed protocol re: #Texans Savage concussion vs SF. But changes have been made to the protocol. @KPRC2 pic.twitter.com/0DCzY5LmQL

Obviously, these are all moves that make sense, and all moves that I'm skeptical about the league's ability to execute properly. My biggest takeaway is that, until now, they didn't require a player examined for a concussion to be examined the following day? That seems basic.

Thankfully, that was the most we heard from Hilton, noted Texan killer, all day as he finished with three catches for 14 yards.

2. Bald men trying to overcome baldism
CBS did a fantastic montage on Texans' offensive lineman David Quessenberry and his recovery from non-Hodgkins lymphoma. We all know the story, how awesome it is, and how riveting it is every chance we get to see the national media gush about the courageousness of..... CHRIS MYERS?!?


So @CBS just told the inspiring David Quessenberry story. One problem... This is @CMyers55 pic.twitter.com/Gx8dw5eB8k

Hey, CBS, as a  bald guy, let me just say that I find your apparent implication that all bald guys look EXACTLY alike as RACIST. I will only forgive you if you do a montage on how handsome Chris Myers is and accidentally include a picture of me.

1. The worst of the worst
If we are listing reasons that the Texans finished 4-12 this season, I'm fine with putting major injuries to Deshaun Watson, J.J. Watt, and Whitney Mercilus at the top of the list. That said, we can't ignore the major regressions or underperformance (or just plain lack of talent) from some of the other key players on this roster. I'll categorize these:

Underperformers who need to do some soul searching this offseason: Kevin Johnson, Kareem Jackson, Bernardrick McKinney (although I'm fearful he will get a decent contract extension),Will Fuller, Lamar Miller, Jay Prosch (not sure why he's on the team, but he got an extension so what do I know?), Braxton Miller, C.J. Fiedorowicz (if he plays next season).

I'll address all of these in longer form at some point in the coming weeks, but the bottom line is this roster has maybe a dozen players who are viewed as true, plus-level commodities around the league. So while Deshaun Watson's presence makes this a desirable job for the next general manager, the lack of depth and talent around Watson makes it a difficult one, too.