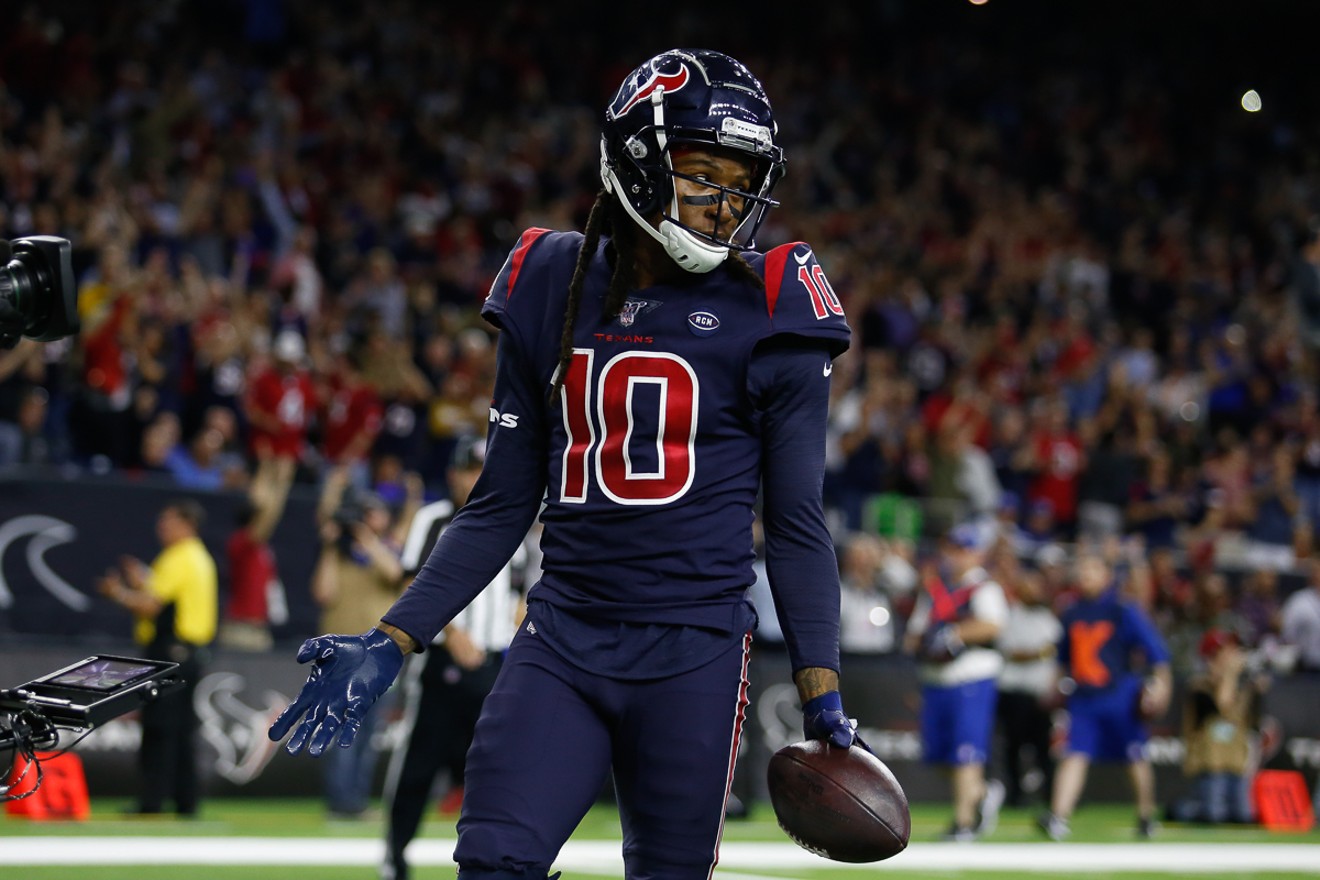 The DeAndre Hopkins trade was the beginning of the end for the Bill O'Brien Era. Photo by Eric Sauseda
A year ago today, we were five days into one of the most harrowing, anxiety-inducing eras of any of our lives, with a pandemic beginning to swirl, businesses everywhere shutting down, and an American public bracing for uncertain times. The only thing we knew is there would be human and fiscal carnage.

We needed a distraction. Any distraction would do, or so we thought, and that brings me to maybe the one nice thing I can say about Bill O'Brien as general manager of the Houston Texans — the absurdly lopsided, inexcusable DeAndre Hopkins trade that O'Brien executed, at least it gave us something other than COVID to discuss and be angry about for the next several days.

DeAndre Hopkins (and a 2020 4th round pick) for a 2nd round pick, David Johnson, and a 2021 4th round pick. The day it went down it seemed absurd, it seemed like the worst trade in franchise history, and amazingly, it wound up being even worse than we'd imagined on that fateful day. To relive the trade fully, you have to relive the spin that JACK EASTERBY the team tried to put on it after the fact, a barrage of tripe that was recounted in a recent article in The Athletic about Deshaun Watson's lost trust in the team:

After nearly a week of harsh criticism and no public comments from team brass regarding the trade, the Texans sent an email to reporters titled “2020 Offseason Notes,” the contents of which spanned 58 bullet points across six sections and were consistent with Easterby’s messaging. The memo included the phrasing “smart, tough and dependable” three times to describe players; O’Brien began using the phrase after Easterby’s arrival, and it was incorporated into highlight videos.

I received the email in question, and it was as absurd as it sounds. Here were the bullet points attempting to justify a trade that signaled the beginning of the team's tumble into a league wide punchline, along with me retort to each one:

The section on the Hopkins trade mentioned that the pick Houston acquired from Arizona was “only 18 spots lower than” the pick Minnesota acquired for receiver Stefon Diggs
This was pointed out as if Hopkins netting a pick 19 spots lower than the pick the Vikings got for Diggs was actually not just excusable, but somehow it was a JOB WELL DONE! The Diggs trade from Minnesota to Buffalo was made the same day as the Hopkins trade. At that point, Hopkins was a first team All Pro for the last three seasons. Dggs had never been to a Pro Bowl.

The Texans claimed they "acquired a very valuable 2nd round pick in 2020 (40th overall)", and pointed out it's an "area of the draft where you still get ‘first round talent’ but the contract is less money"
Yeah, or you draft Ross Blacklock, and wind up paying Randall Cobb $9 million per year later that week. This was such a clown show memo, man.

They declared the pick "will bring a very talented, young and cheap player to Houston for the next four years", and they pointed out that "this is the deepest wide receiver class in years"
These bullet points basically point to the Texans using the 40th overall selection on a young wide receiver, which would have been awesome since there were several good ones on the board, including Chase Claypool and Laviska Shenault. They chose Ross Blacklock, traded the 57th pick for Brandin Cooks (who makes $12 million per year), and wound up drafting Isaiah Coulter in the 5th round. Coulter had zero catches this season.

The bizarre touting of the 4th round pick they will receive in the 2021 draft
OK, this is where it went from dark humor to flat out bizarre. The Texans and Cardinals swapped fourth round picks in this deal, with the Texans sending their 2020 4th round pick with Hopkins and receiving the Cardinals 4th round pick back in the deal. The team made it sound like this pick would rock the foundation of the football world, making the following assertions:

* Acquiring Arizona’s 2021 fourth-round pick was an important part of the deal that nobody talks about.
* Should be a much better draft pick than the fourth-round pick we gave up this year.
* Needed more draft capital for 2021 since we don’t have a first or second round pick.
* Arizona is in a very tough division so the pick has a chance to be pretty high

Holy overthinking things, Batman! If they devoted the same amount of energy into placating Deshaun Watson as they do justifying the 122nd pick in the draft, they wouldn't be on the cusp of being forced into trading their franchise quarterback.

David Johnson will be our starting running back and a key part of the offense. He is a tough, smart, dependable player and we needed a RB after letting Carlos Hyde leave … Arizona’s Walter Payton NFL Man of the Year nominee in 2019 while not playing the role he desired — very high character and good teammate … Played for two different head coaches and two different offenses the last two years which impacted production and both were first-time head coaches.

Johnson will return this year on a one year deal to —-  wait for it — PLAY FOR A FIRST-TIME HEAD COACH. You can't make this stuff up.