Rockets rookie Jalen Green smiles his way through his first media day. Screenshot
As we approach October 1, it could be argued that this is the best time of year for sports. The NFL is in full swing, baseball is headed for the playoffs, college football is rolling as is hockey. Even tennis and golf are still playing. And the NBA is back.

On Monday, the Rockets had their annual rite of passage for the new season with media day held at Toyota Center, in person, for the first time since COVID-19 forced press conferences onto Zoom. While every media day takes on its own tenor, 2021 was a rather unique experience for the Rockets given the dramatic turnaround from last year. Go back just two years and only two players and one team owner remain from the media day roster, including coaches, the GM and team executives.

This year, it was dominated with questions about youth and included an interview with GM Raphael Stone and John Wall together about the odd decision to have him with the team but not playing this year until they can find a suitable trade partner.

Last year was James Harden. This year was Jalen Green. It's all new and we have thoughts.


Vaccinations will not be an issue for the Rockets.

While Texas won't present any problems for the Rockets in terms of laws about COVID vaccinations, this team won't need to be concerned as GM Raphael Stone announced during the first question of the day that the Rockets are "100 percent vaccinated." Not only does this lift any serious protocol-related issues that could have cropped up during the season — specifically sitting out games due to exposure — it also circumvents any potential snafus in other cities where laws are decidedly more vaccine-forward than Houston.

Instead of having to answer questions about whether players would get exemptions from the NBA like in Golden State with Andrew Wiggins, or be forced to constantly say "no comment" or "please respect my privacy" as is the case in Brooklyn with flat-earther Kyrie Irving, the Rockets can get rid of that discussion topic with a single answer in the first two minutes of media day.

Kevin Porter, Jr. says the Rockets organization "saved his life."
Screenshot
The kids will be alright.

"Static" is how rookie Jalen Green described the energy around the team. Players all talked about how you could feel it in the building and when the guys hung out together. Green appears, whether it is in his Rockets uniform in a press conference or on Instagram with his millions of followers, to truly love his life (as well he should). But, he remains focused on what is important. "Keep the main thing the main thing," he said of keeping his eye on the ball literally and metaphorically.

Kevin Porter, Jr., who is soft spoken and polite, said the Rockets organization "saved my life." No doubt there will be much discussion of this from Rockets media, but it goes deeper than just saying the team helped pull him out of a spiraling depression in Cleveland. His words are measured and he sounds balanced.

Each of the younger players (two of the team's three rookies spoke at media day along with KPJ and Jae'Sean Tate) sounds like they are ready for this jump to the big time and they are all clearly having fun doing it together. 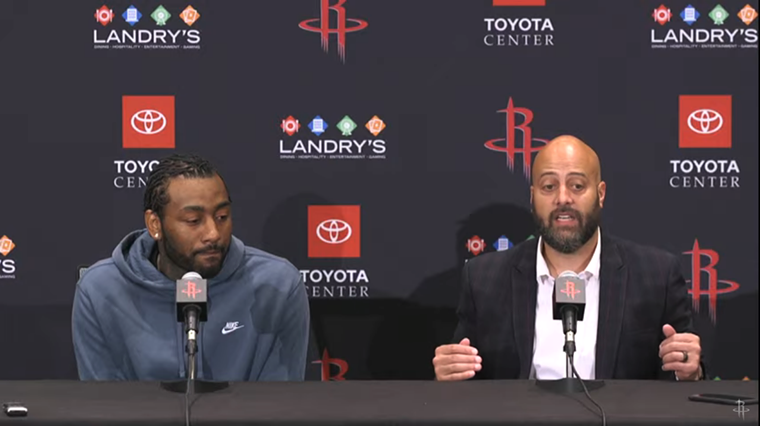 John Wall (left) and GM Rafael Stone discuss his role with the team this season.
Screenshot
John Wall is a Rocket for now, but he will not play.

Credit where credit is due. Wall and Stone came out together for the last interview to lay out the parameters of what could have become a very complex situation. Wall will be with the team in camp and for games, both home and away. His role will be to work with younger players and advise them. But, he will not play. This will continue until the team can find a way to move Wall to another team, one he agrees with.

This is similar to the situation with Harden last year, but without the soft pedaling we saw from the mercurial star before his move to Brooklyn. Wall won't risk injury and there will be no speculation about his situation. This is the way it is until he is gone. That seems a good solution for everyone as long as both are comfortable and they seem to be.

Whether this is the youth of the two team executives or the way it is in the new NBA, both approach the game in ways we aren't used to witnessing. Silas is incredibly hands on with players, part coach and part friend. He allows players to be involved in the decisions on and off the floor. He wants their input and shares those feelings with anyone willing to listen. The Rockets recently released a short documentary about Silas's career and philosophy and it is clear he leans heavily on the idea that you need to have great relationships with everyone, players especially.

Stone's greatest and most unique characteristic might be his absolutely transparent bluntness. He doesn't mince words and is about as straight a shooter as you get. He was not shy on draft night in saying what players needed to do to get better, nor was he averse to talking about how he and Wall drank wine and talked for hours when Wall first arrived in Houston. He refers to working with players as partnerships and says, despite this old-school idea of how things should be — coach tells players to jump, players say how high — it has actually never been that way, referring to stories about Bill Russell's days with the Celtics.

They both appear to be almost zen-like in their demeanor — Stone said on Monday it's not really in his nature to get stressed out — while still managing to wear their emotions on their sleeves. It's disarmingly refreshing and how most of us would want our team leaders to be. It would seem the Rockets have the right guys in the right place at the right time.

Next step is to toss the ball and get rolling. The first preseason game is only a week away.
KEEP THE HOUSTON PRESS FREE... Since we started the Houston Press, it has been defined as the free, independent voice of Houston, and we'd like to keep it that way. With local media under siege, it's more important than ever for us to rally support behind funding our local journalism. You can help by participating in our "I Support" program, allowing us to keep offering readers access to our incisive coverage of local news, food and culture with no paywalls.
Make a one-time donation today for as little as $1.