Houston Texans, Where Are They Now? All The Non-Watson QB's of the Bill O'Brien Era 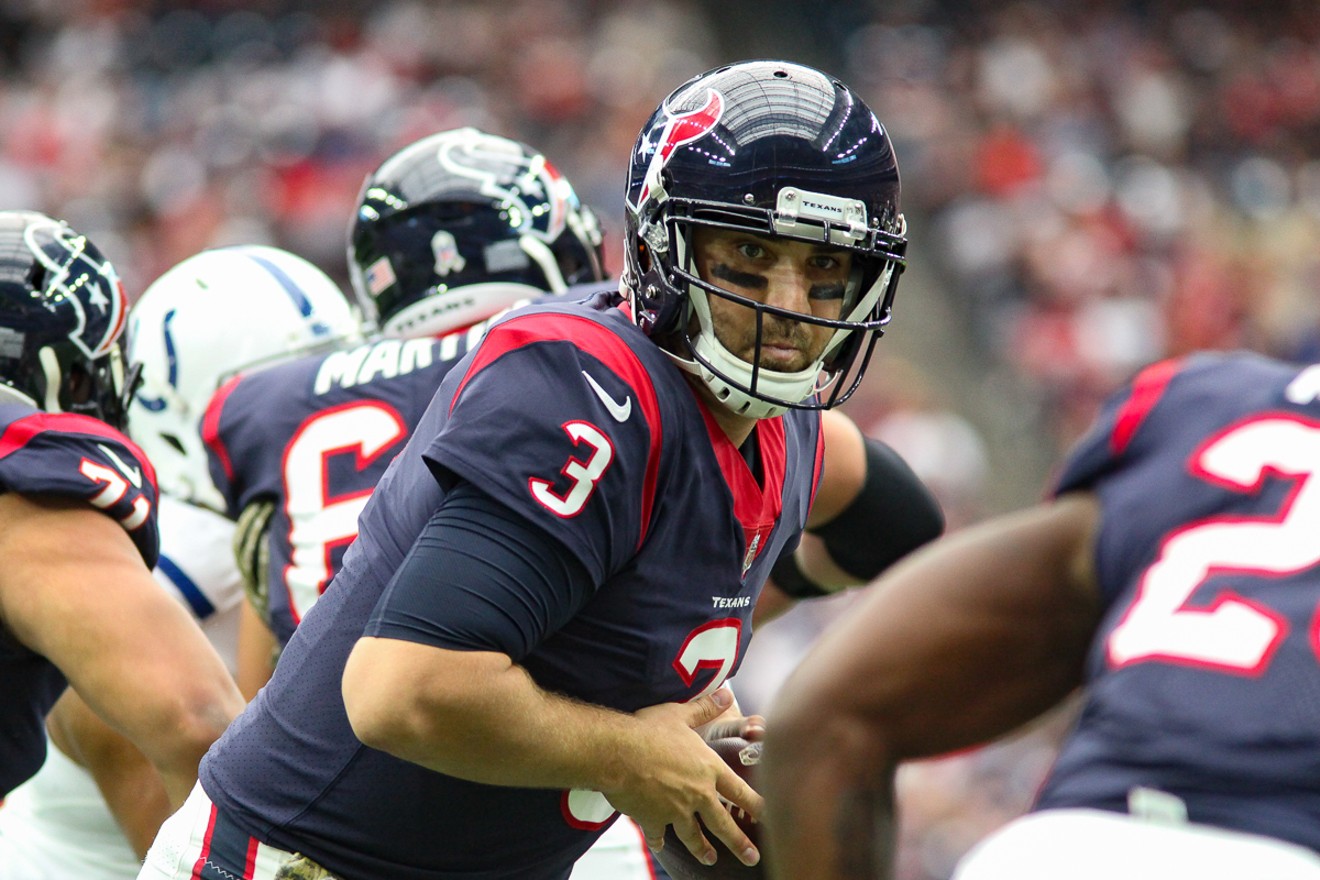 It's OK, people.. only seven more games of Tom Savage. Photo by Eric Sauseda
So I'm on Twitter on Tuesday night, and I see that former Houston Texans quarterback Tom Savage has signed on with the Detroit Lions to compete with Connor Cook for the backup job behind Matthew Stafford, and it made me harken back to 2017, when Tom Savage actually started in Week 1 for the Houston Texans. Yes, a defending division champion with actual playoff aspirations entered the season with Tom Savage as their starting quarterback.

Hell, at the time, though, it didn't even seem all that strange, mostly because we, as a city, had been collectively Stockholm Syndromed into thinking that starting crappy quarterbacks in Week 1 was normal. Ryan Fitzpatrick, Brian Hoyer, Brock Osweiler. Honestly, Tom Savage was the logical fourth face to etch on that Mount Rushmore, even with a rookie named Deshaun Watson waiting in the wings.

Well, the Savage Era lasted all of 30 minutes, and he was gone after 2017, but his signing in Detroit got me thinking — man, Bill O'Brien sure has had a lot of real journeymen (code for "BAD") quarterbacks come in here over the last five years. (SIDE BAR — Thank God for Deshaun Watson! I do, each and every day!) So where are all of these cats now?

Let's take a look. Here is every quarterback, not named Watson, to throw a pass in the Bill O'Brien Era, and where they are now:

RYAN FITZPATRICK (2014, 12 starts, 6-6 record)
Inked a two-year, $11 million deal to be the worst starting quarterback in the NFL for the Miami Dolphins, a team that is openly tanking for a high pick in the 2020 NFL Draft. Fitzy will never, ever die. He will be the starting QB for the worst team in the league for at least another five years, and it will be for five different teams.

RYAN MALLETT (2014-2015, 6 starts, 2-4 record)
Mallett was out of the league in 2018, and didn't surface in the AAF or any other league, so I had to do some digging. The closest thing I could find to some degree of confirmation that he's not running a meth lab in the middle of Arkansas somewhere was on an Ole Miss podcast (fast forward to about the 6:00 mark), where the host says Mallett now has his own lawn service company, and he recently threatened said host because of some comments on Twitter back in the day. (NOTE: "Lawn service" could well be code for meth lab.)

BRIAN HOYER (2015, 9 starts, 5-4 record)
Brian Hoyer is back where he should be — getting coffee for Tom Brady and collecting Super Bowl rings for doing nothing but being "the first one in and the last one to leave."

T.J. YATES (2015, 2017, 5 starts, 2-3 record)
Yates legendary Texans run continues with him now serving O'Brien as an offensive assistant. I have no idea what Yates' role will be, I just like that he will be around the team. Much like pizza, Touchdown Jesus Yates always makes any situation or gathering more fun!

BRANDON WEEDEN (2015-2016, 2018, 1 start, 1-0 record)
Weeden was recently replaced as Watson's backup by A.J. McCarron, and has not signed with any NFL team (in case you need a barometer for whether or not McCarron is an upgrade over Weeden).

B.J. DANIELS (2015, 0 starts, 2 passes)
I have no idea where Daniels is. Perhaps he, like Mallett, has his own landscaping company now.

BROCK OSWEILER (2016, 14 starts, 8-6 record)
Amazingly, Brock hasn't signed with the New York Jets yet. I figured Adam Gase would have made him and the Brockster a package deal when he became the head coach in New York. Seriously, if the Dolphins were going to tank this season, they should have just re-signed Brock. Fitzy will find a way to win four or five games and screw up their getting the first overall pick. Brock has 1-15 written all over him.

TOM SAVAGE (2014-2017, 9 starts, 2-7 record)
As mentioned above, Savage is signing with the Lions. This makes four teams — FOUR! — that Savage has been on since leaving the Texans after 2017 — the Saints, 49ers, and Bengals all took a turn with him on the roster last season. I repeat, TOM SAVAGE WAS THE TEXANS WEEK 1 STARTER IN 2017. Dear God, what was O'Brien thinking?

TAYLOR HEINICKE (2017, 0 starts, 1 pass)
Heinicke's Texans career consisted of one completion and one concussion, and eventually a one way ticket out of town. Amazingly, he is now Cam Newton's backup in Carolina. Good for him.