Explore How Architecture Has Been Preserved In Galveston's Historic Homes 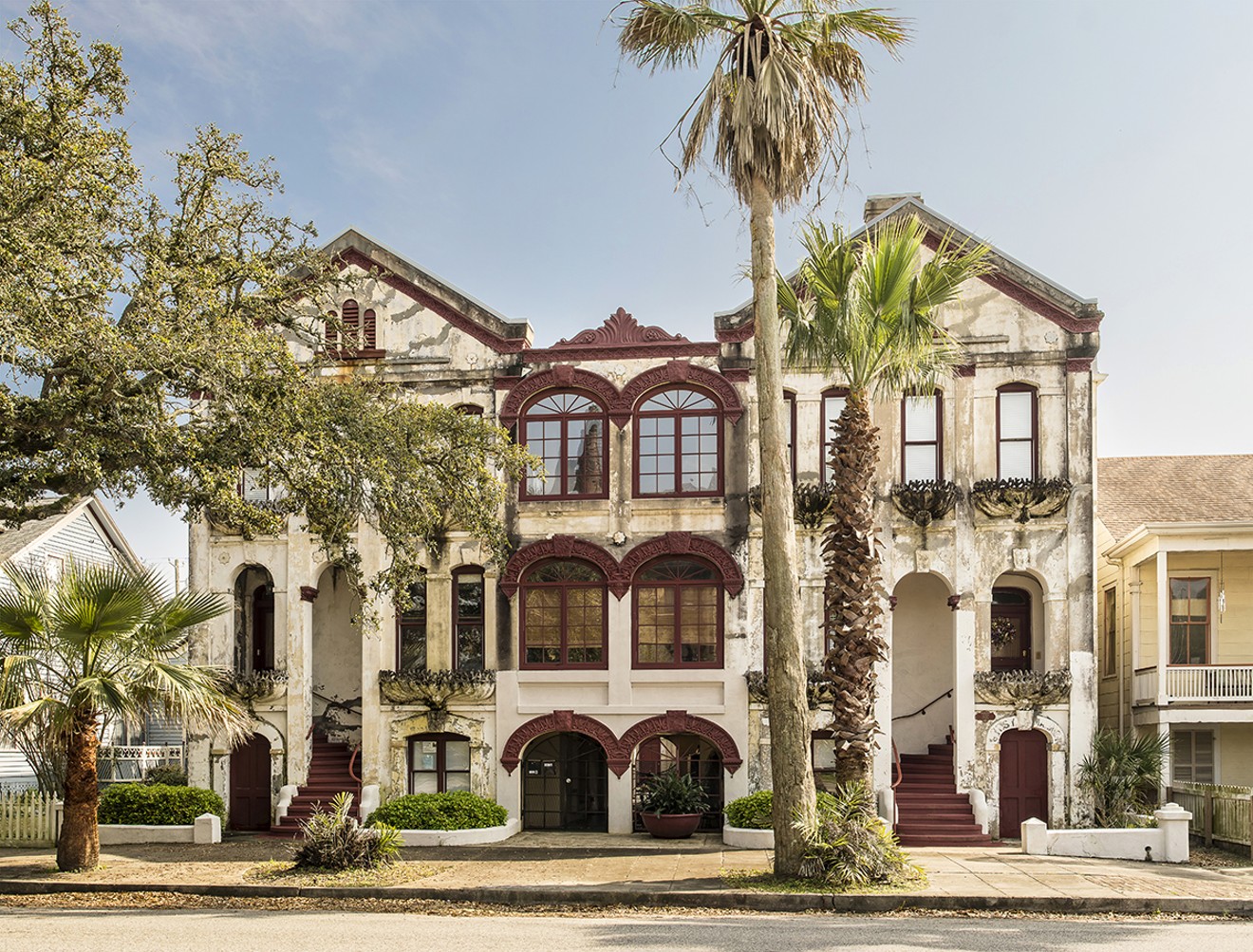 Lucas Terrace complex, built 1901-1908, 1407 Broadway. Photo by Illumine Photographic Services, courtesy of Galveston Historical Foundation
We already were excited about the return of clear blue water to Galveston Island, though everybody knows it won't last long. Just as much of an attraction, and certainly more dependable, is the upcoming Galveston Historic Homes Tour.

James and Amelia Byrnes house, built c.1881, "Rehabilitation in Progress" house, 2113 Ball.
Photo by Illumine Photographic Services, courtesy of Galveston Historical Foundation
It's the 45th go-round for this annual backstage pass to privately-owned homes, presented by the Galveston Historical Foundation. Half of the eight properties on this year's tour were still standing after the Great Storm of 1900, though that's not to say they were unscathed.

For the circa 1881 property at 2113 Ball, the real danger was in neglect and the ravages of time. During a 1969 city referendum on urban renewal, this property had so declined that it served as an example of urban decay. The home was purchased by new owners in 2013 and it's the "Rehabilitation in Progress" entry for this year's home tour. Architectural details inside include coved ceilings, a compass rose ceiling medallion for the chandelier, and period molding around the doors. August Roemer tenant house, built 1873, 1416 Sealy.
Photo by Illumine Photographic Services, courtesy of Galveston Historical Foundation
The oldest house on this year's tour dates back to 1873. It's a one-and-a-half-story Gulf Coast cottage with triple dormers, a center hall and square porch columns located at 1416 Sealy. Inside discover a light and bright kitchen that balances the old with the new: farmhouse sink, furniture quality center island, reclaimed hardwood floors and a pair of geometric chandeliers. 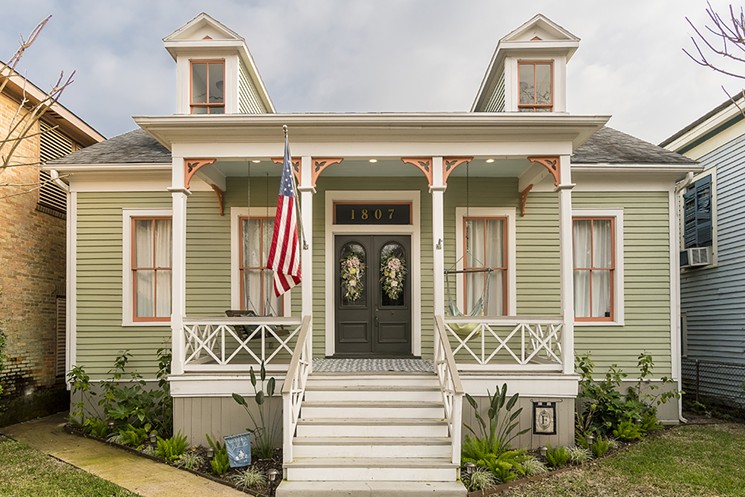 Conrad and Henrike Lenz house, built 1887, 1807 Avenue L.
Photo by Illumine Photographic Services, courtesy of Galveston Historical Foundation
Believe it or not this one-and-a-half-story home from 1887 was originally owned by a butcher who emigrated from Germany; he operated a shop and smokehouse at the property next door. The current homeowners have chosen a soft pastel color palette, with a cool beachy vibe, while also preserving architectural details such as wainscoting and hexagonal bathroom floor tile. They're big supporters of the island's arts scene, so you'll also find local treasures along the home's center hall. 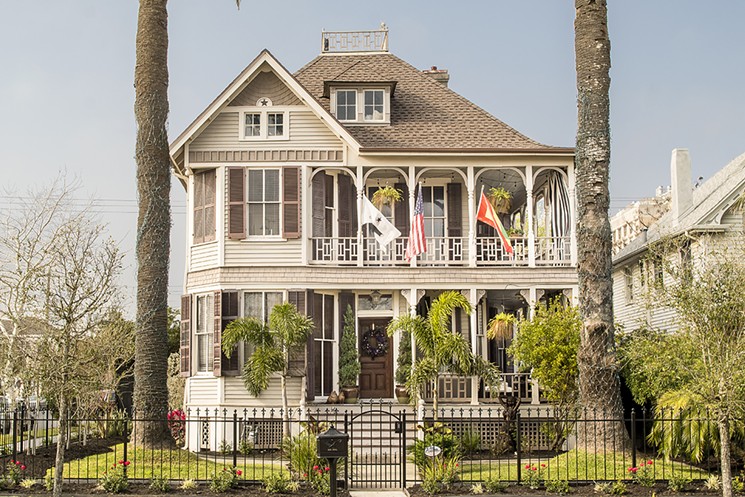 Allen and Lulu Cameron house, built 1891, 1126 Church.
Photo by Illumine Photographic Services, courtesy of Galveston Historical Foundation
This Victorian house was built in 1891 and was designed by English born architect Henry Collier Cooke of the firm Bourgeois Nitchner & Cooke. It is distinctive for its asymmetrical façade with double wrap-around galleries separated by a patterned shingle skirt, a decorative balustrade and a widow’s walk. The beautifully preserved interior still sports Victorian gingerbread, as well as custom millwork around the doors, windows and fireplace. 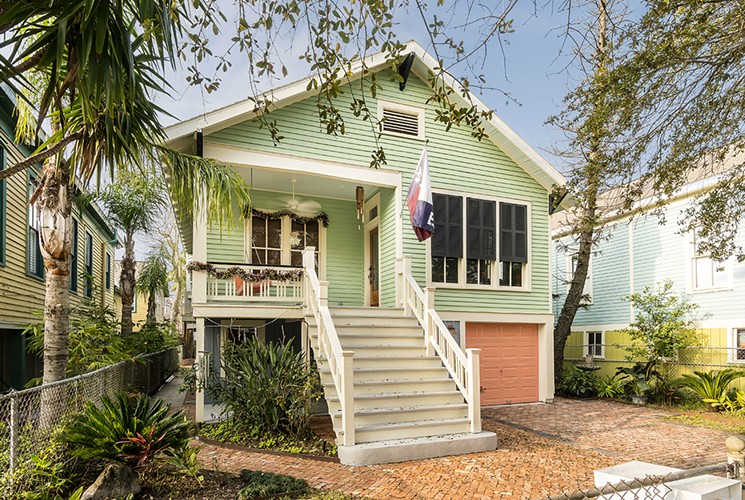 Peter and Anna Serini house, built 1903, rebuilt 1923, 1810 Avenue N ½.
Photo by Illumine Photographic Services, courtesy of Galveston Historical Foundation
The origins of this house get a little bit murky. Historians know that an old house was moved to a vacant lot in 1903. Ten years later the new owners rebuilt the house but kept parts of the old. There's nothing ancient about the interior, however, though architectural details remain: an open transom rests over the wide passageway between the living and dining rooms. Iocopo Niccolai tenant house, built 1922, 2416 38th.
Photo by Illumine Photographic Services, courtesy of Galveston Historical Foundation
Not all properties were designed as personal residences. This five room bungalow dates back to 1922 and was originally located on 15th Street. An Italian immigrant carpenter moved the home, along with 11 others, to create a block of rental properties on 38th Street. The Niccolai Subdivision generated income for the entrepreneur until his death in 1947.

Peter and Augusta Nielson house, built 1915, 1711 Rosenberg (25th Street).
Photo by Illumine Photographic Services, courtesy of Galveston Historical Foundation
The Arts and Crafts movement definitely influenced construction of this two-story brick house at 1711 Rosenberg Avenue. The current homeowners have played to the strengths of the home's design, layering in antique furnishings and Tiffany lighting, while also preserving the extensive millwork throughout the home.

Shown at the top of this page, Lucas Terrace is more of a complex than a single home. After the Great Storm of 1900, a brick mason and English immigrant salvaged bricks from a destroyed apartment building. It took him seven years to finish building the complex, which contains two gable-front three-story buildings, a courtyard, and a detached servant's quarters on the south end.

This year’s Galveston Historic Homes Tour will partner with Outdoor Painters Society’s Plein Air Southwest for their annual member’s competition, show, and sale featuring 44 juried artists. These artists will record history across the island in the form of paintings created during the tour. A public sale of the art will be open on Saturday, May 11 from 9 a.m. to 6 p.m. and Sunday, May 12 from 9 a.m. to 3 p.m., at the 1859 Ashton Villa, 2328 Broadway. Proceeds from the sale of artwork benefit Galveston Historical Foundation.