Can UH hang on to extend its streak? Breaon Brady (24) sure wants to see that happen. Photo by Jack Gorman

As a longtime fan of University of Houston athletics, I know better than to count my chickens before they hatch. That being said...

The Houston Cougars men's basketball team hasn't lost a game in six weeks, and they haven't lost at home since last March. Boasting a 25-1 record, UH currently sits atop the American Athletic Conference (AAC) standings. Their lone loss to Temple in early January was avenged with a 73-66 victory over the Owls in the newly minted Fertitta Center later that month.

With every game, the team looks more complete, more tenacious and more like the real deal.

Save for that single loss — which was a close, hard fought game — the Coogs have been unstoppable all season. Heading into March, the Associated Press has UH ranked 9th nationally, a feat that hasn't been accomplished since 1984 when the team was coached by Guy V Lewis.

In the 35 years since, the Coogs have had their ups and downs. Most recently, the team earned a trip to the NCAA Tournament last season, where they were knocked out in the second round by a buzzer-beating, long three-point shot from Michigan's Jordan Poole.

Michigan would go on to lose to Villanova in the championship game.

UH began the 2018-19 season with a 101-54 victory over Alabama A&M. A few weeks later, the team posted wins over Oregon, Oklahoma State and LSU before beginning conference play. Since then, the team has been rolling, and they look to continue their winning ways at home this weekend. 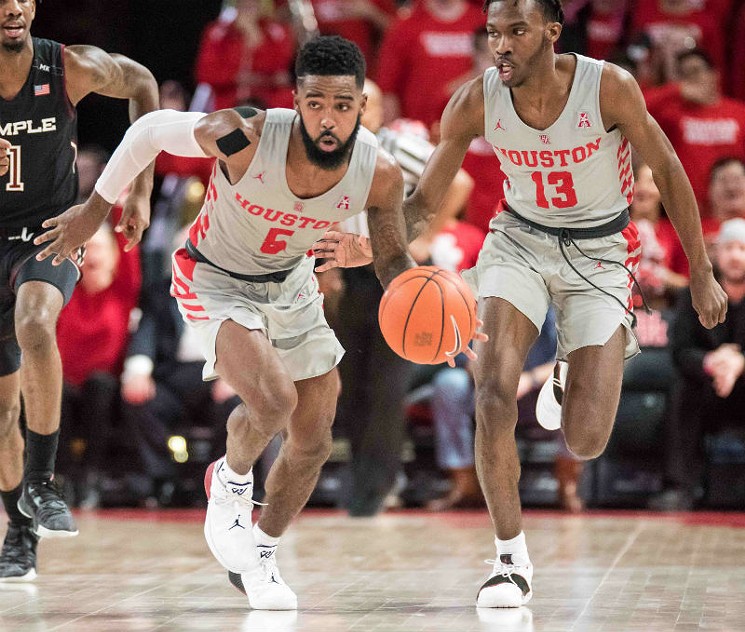 Corey Davis, Jr. (5) and Dejon Jarreau (13) were running and gunning in the game against Temple.
Photo by Jack Gorman

This Saturday, the Coogs will host South Florida at Fertitta Center, where they will be looking to extend their best-in-the-nation home winning streak to 33. Four conference games follow: East Carolina University, University of Central Florida, Southern Methodist University and Cincinnati.

The Cincinnati game looms large, with the Bearcats currently boasting the second-best record in the AAC. UH won their first meeting by 7 earlier this month, so Cincinnati will be looking for revenge to close out their season at home. But first things first: South Florida.

Coach Sampson knows better than to overlook an opponent, no matter his team's record and ranking. He will expect his team to be laser focused for all their three remaining home games.

Last year's run got people excited. This year might have fans even more so. As a longtime supporter, I know better than to count on anything. But as a lifelong Coog, I also know that anything can happen. Who knows? This year's team just might be poised to continue surprising people deep into March.

Hell, maybe even into April. Why not?

The Houston Cougars are scheduled to play the South Florida Bulls at 5 p.m. on February 23 at Fertitta Center, 3422 Cullen. For more information, call 713-462-6647 or visit uhcougars.com, $10 to $285.
KEEP THE HOUSTON PRESS FREE... Since we started the Houston Press, it has been defined as the free, independent voice of Houston, and we'd like to keep it that way. With local media under siege, it's more important than ever for us to rally support behind funding our local journalism. You can help by participating in our "I Support" program, allowing us to keep offering readers access to our incisive coverage of local news, food and culture with no paywalls.
Make a one-time donation today for as little as $1.