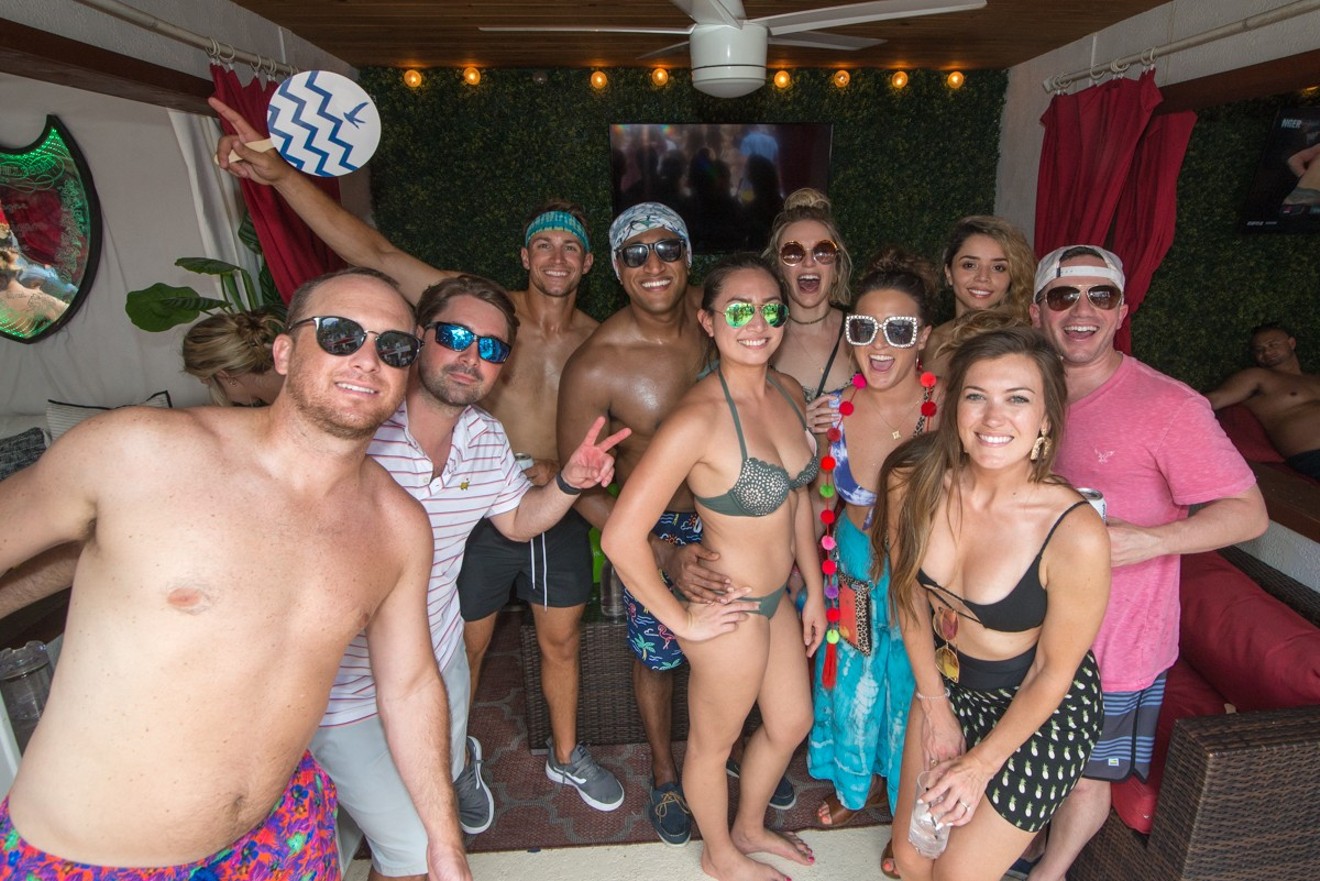 Happy Clé partygoers in July 2019 — nine months before COVID-19 essentially shut down such festivities. Photo by Jack Gorman
The Texas Alcoholic Beverage Commission announced Tuesday that it has suspended the liquor licenses for three Houston nightclubs — Spire at 1720 Main, Clé at 2301 Main and Grooves at 2300 Pierce — after all three were caught flouting Gov. Greg Abbott’s COVID-19 regulations by ignoring occupancy limits this weekend.

Spire received the harshest penalty with a 90-day liquor license suspension, while Clé was hit with a 60-day suspension and Grooves with a 30-day ban from selling alcohol after TABC investigators “found violations of state requirements to prevent the spread of COVID-19,” the state agency announced in a press release.

While this is Grooves’ first liquor license suspension during the pandemic, Clé previously had its license suspended back on September 8. Spire’s license was already suspended twice last year on July 1 and October 20.

“All three businesses are accused of violating Gov. Greg Abbott’s Executive Order GA-32, which requires businesses which sell alcohol for on-premise consumption to comply with capacity limits as well as social distancing and facial covering requirements,” according to TABC.

Clé made headlines over the weekend for hosting a jam-packed concert from rapper Bow Wow on Saturday with hardly a mask in sight after a video from the show went viral on Twitter.


Bow Wow got the club packed in Houston pic.twitter.com/iY83PSA5J3


On Saturday, the Houston Fire Department shut down Spire once it inspected the club after receiving complaints about overcrowding. Houston Fire Chief Sam Peña told ABC13 that inspectors couldn’t get an occupancy count from club ownership and found blocked off exits, so it deemed the club a fire hazard.

Bars and nightclubs aren’t technically allowed to operate right now in Harris County, but many have taken advantage of TABC loopholes to keep their doors open. TABC defines bars and nightclubs as businesses that get at least 51 percent of their revenue from alcohol sales, so many have reclassified as restaurants by showing state regulators that food sales and other non-alcohol sales make up most of the money they bring in.

Zach Truesdell, the owner of Clé and Spire, claimed this summer that Spire is legally considered a “reception hall” instead of a bar or nightclub since most of its profits allegedly come from ticket sales to events and table rental fees.

In remarks to the media at the city’s COVID-19 vaccination clinic Saturday, Turner urged TABC to reconsider those policies so that these clubs that are blatantly disregarding public health guidelines can’t stay open. “They have to review their policies,” he said. “That is a huge loophole.”

Prior to Tuesday’s liquor license suspensions, Turner and Bow Wow were trading barbs on Twitter over the past few days about the rapper’s unsafe concert:

Safe to say the mayor of houston hates my guts. I cant believe i get the blame for a whole weekend. This is ridiculous.

Let me be very clear. I don’t dislike @BowWowPromoTeam. While the city is in the midst of this pandemic nearly 2000 infected and 17 dying yesterday, this is not the time for concerts. Help us get past this virus and then do your thing. The same for other bars & clubs. st #COVID19


But in case anyone was worried, Houston’s mayor and the rapper already appear to have buried the hatchet:


Much love mayor! Once again im sorry if i caused any disruption. I didnt mean to. All love! And i love the city of houston with all my heart. I got your front row seats to the millennium tour when we hit Toyota center. God bless. https://t.co/nYQglVnb0i