Cohen is currently vying for the Republican nomination to challenge Lizzie Fletcher in District 7. Fletcher unexpectedly flipped the district in 2018, and since the redistricting is now almost certain to retain her seat against any Republican challenger. Not that she will likely have much competition from Cohen if the furniture president does manage to win as the Republican seems to have a problem keeping her mouth in check online.

On March 10 of 2021, as the state was beginning to open up, Sassterpiece Theatre writer and performer Tim Eggert posted a meme comparing the Texas state government’s decision to loosen restrictions to the mayor from Jaws. Eggert also thanked everyone who had continued to mask up and social distance.

Cohen then began commenting, starting by claiming that the virus was purposefully released and promoted by the media. She also said “Qanon is as legit as Antifa or BLM. They are just groups of people that have theories.” 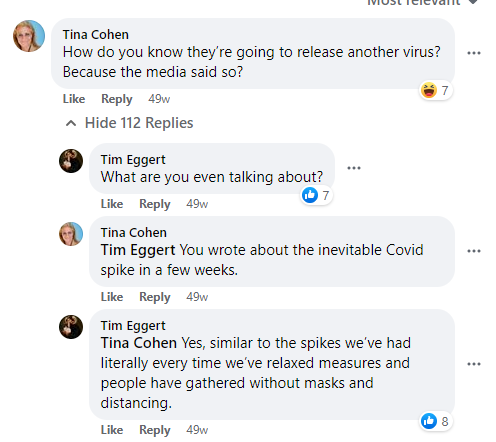 Screencap from Facebook
The comment thread continued in this same vein for a while until she started talking about undocumented workers in the U.S. 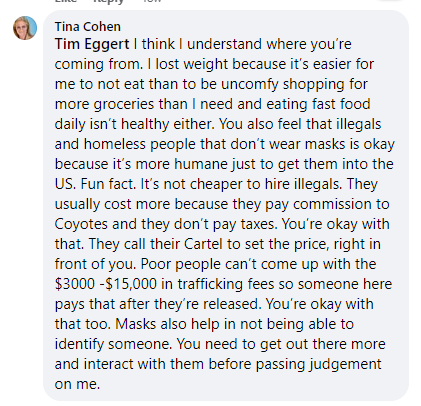 Screencap from Facebook
“You also feel that illegals and homeless people that don’t wear masks is okay because it’s more humane just to get them into the US. Fun fact. It’s not cheaper to hire illegals,” she commented. “They usually cost more because they pay commission to Coyotes and they don’t pay taxes. You’re okay with that. They call their Cartel to set the price, right in front of you. Poor people can’t come up with the $3000 -$15,000 in trafficking fees so someone here pays that after they’re released. You’re okay with that too. Masks also help in not being able to identify someone. You need to get out there more and interact with them before passing judgement on me.”

And then she admitted that she had hired undocumented workers herself.

Screencap from Facebook
“Hold on, I was able to hire illegals all year to do some jobs. Isn’t that what we’re supposed to do because we were forced to send our employees home? Yes? No? They don’t show up with masks. I’ve seen all kinds of paperwork. Do you honestly think all the essential workers are legal? How do they check it where you work? Do they fire them when they are aware of fake papers or do they just blow it off? How do you know if they have criminal record or not? It’s easy to find that out if they’re legal.”

Knowingly hiring undocumented immigrants, as Cohen has done, carries severe penalties. First time offenders can be charged up to $3,200 per worker, and repeated offenses can reach up to $16,000 per worker.

Cohen’s campaign platform includes fighting vaccine mandates, being tough on crime and, ironically, securing the southern border. The Republican Primary takes place on March 4.
KEEP THE HOUSTON PRESS FREE... Since we started the Houston Press, it has been defined as the free, independent voice of Houston, and we'd like to keep it that way. With local media under siege, it's more important than ever for us to rally support behind funding our local journalism. You can help by participating in our "I Support" program, allowing us to keep offering readers access to our incisive coverage of local news, food and culture with no paywalls.
Make a one-time donation today for as little as $1.