NIck Caserio has a busy couple days coming up, and some difficult roster decisions to make. Photo by Jack Gorman
All week long, leading up to Saturday night's game between the defensing Super Bowl champion Tampa Bay Buccaneers and the Houston Texans, we were excited to find out just how many of the things the 2021 Texans were doing unexpectedly well at training camp would translate against a good team. Well, be careful what you wish for, because Tom Brady showed us that, at least on the defensive side of the ball, the Texans still have a long way to go against good teams.

The final score, 23-16 Buccaneers, looked relatively close on the scoreboard, but the part of the game most relevant to where the 2021 Texans are as a football team was over and done with in the first quarter. After going three and out on his first drive, Brady then engineered two touchdown drives (11-12, 154 yards 1 TD pass) that looked like he was playing MADDEN at the easiest difficulty level.

Buccaneers head coach Bruce Arians had said all week his starters would play a half, but there was no reason for Brady to go any further in that game. There was nothing to gain from having him carve up the Texans' defense one more time.

Ultimately, the game became entertaining, so much so that the Texans managed to find a way to lose a game in which they scored a safety, caused three turnovers, blocked two kicks, and ran the ball for over 200 yards. That will happen when your offense is turning the ball over five times themselves.

So now, here come the roster moves, as Nick Caserio cobbles together his first 53-man roster as a general manager. I don't know exactly who's making this team, but what I do know is that whoever is on this 53-man roster come Tuesday afternoon at 3 p.m. (the deadline to make all the necessary moves) had better not get too comfortable with their spots. Caserio is going to churn the ever loving hell out of this roster all season long.

For now, let's do a special "Four Winners, Four Losers" for some of the more interesting roster spots heading into this week. Here we go: 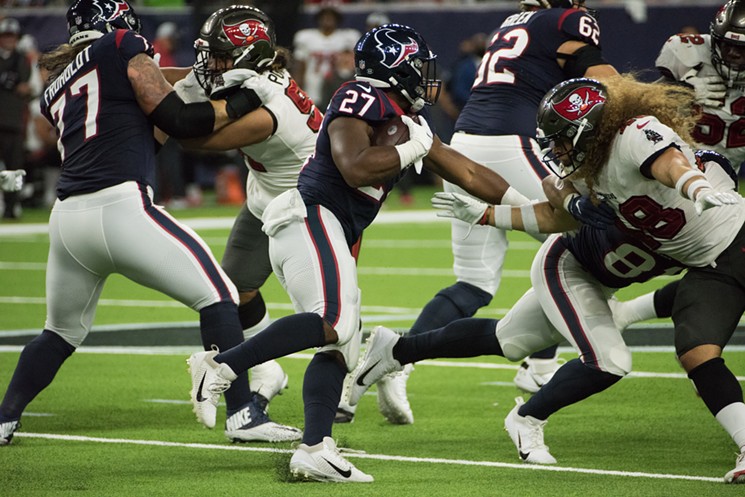 Scottie Phillips has earned a spot on the Texans' 53-man roster.
Photo by Jack Gorman
4. BACKUP RUNNING BACK
WINNER: Scottie Phillips, LOSER: David Johnson
The story at the running back position coming into the season for the Texans was how they'd signed (or in the case of David Johnson, kept around) four veteran running backs on one-year deals. In addition to Johnson, Phillip Lindsay, Mark Ingram, and Rex Burkhead were all brought in to compete for roster spots. With all that veteran presence, the back who ran with the most juice and energy this preseason was easily Phillips (28 carries, 155 yards), the second year back out of Ole Miss. He needs to make this team.

Meanwhile, Johnson, despite a 21-yard scamper on Saturday night early in the game, has appeared largely washed up throughout the preseason, as he did for most of 2020 after coming over in the DeAndre Hopkins trade from Arizona. If Johnson makes this team, it will be because the team doesn't want to pay him $4 million (his guaranteed salary this season) to go home. Instead, they'd rather pay him $4 million to play football poorly for the Texans once again. My guess is that Caserio is calling around trying to find trade partners for one of these veteran running backs, to try to snare a late round draft choice and open up a spot for Phillips (or Johnson, or Burkhead, or whoever).

3. THIRD STRING QUARTERBACK
WINNER: Deshaun Watson, LOSER: Jeff Driskel
OK, let me explain on this one. These two moves — keeping Watson and cutting Driskel — are obviously not intertwined. There is now decision between who to keep here. However, there are decision to make regarding quarterbacks beyond starter Tyrod Taylor and rookie Davis Mills. Let's start with Driskel, who didn't take a snap on Saturday night. He may be a swell human being, but he is an abysmal NFL quarterback. I expect the Texans to release him, and scour the waiver wire for a different veteran backup QB. As for Watson, if the commissioner doesn't hand down a decision on some form of discipline by Tuesday at 3 p.m., Watson will need to be on this roster until the Texans trade him, unless they cook up some injury to place him on injured reserve, but even then, he'd need to be on the 53-man roster at 3 p.m. Tuesday to be allowed to go on the version of injured reserve under which he could return to the field in 2021. In short, it looks like right now, Watson will begin 2021 as a Houston Texan, and my guess is that he would be inactive on game days. What a time to be alive.

2. BACKUP SAFTEY
WINNER: Terrance Brooks, LOSER: A.J. Moore
Caserio has made it pretty clear that if you're a remnant from the O'Brien Era, you'd better show some major improvement under this new staff to be kept around. As they like to say in the mob when a new boss takes over, Nick Caserio ain't respecting old arrangements. Ask Isaiah Coulter, John Reid, and Kahale Warring. Moore fit the classic mold of an O'Brien favorite — he was a street free agent, who was willing to bust ass on special teams and was about two notches below an average player at his named position when given the chance on defense. If O'Brien were still the GM, Moore would probably have a four-year, $20 million extension by now. Caserio has no attachment to Moore, who's missed the last couple weeks with an injury. Meanwhile, Brooks continues to make plays, with his second pick of the preseason on Saturday night. Brooks deserves to make this team, and Moore's time should be up.

Whitney Mercilus doesn't look any different than he did in 2020, not a good thing.
Photo by Jack Gorman
1. BACKUP DEFENSIVE END
WINNER: Whitney Mercilus, LOSER: Someone probably more deserving
It's one thing to cut David Johnson and take the $4 million cap hit, but it would be another thing altogether for Caserio to incur an extra SEVEN million in dead cap mopey by releasing Mercilus. Yes, that's right, the worst contract of the O'Brien Era (which is saying something, because it was a sea of bad contracts) is the dagger that keeps on stabbing. If Mercilus is on the roster, his cap hit is $8 million — that hurts just to type it. If he gets cut, his cap hit is $15 million. Yes, FIFTEEN MILLION DOLLARS. On Saturday night, Mercilus looked just like he did throughout 2020, overwhelmed and old. I have a feeling he is making the team, and I hate that, because watching Mercilus play makes me sad. He is a tremendous human being, who has no business on an NFL field, or at least not at even a fraction of what he is making.