Houston Mayor Sylvester Turner announced Wednesday a firefighter pay increase "the city can afford." Screenshot
Houston Mayor Sylvester Turner announced Wednesday an 18 percent pay raise for city firefighters that would be implemented over the next three years. The raise, which still has to be approved by City Council, would cost $115.3 million, all of which is coming from the federal American Rescue Plan Act, Congress’ latest coronavirus relief package.

It’s the latest development in the years-long battle between Turner and the Houston Professional Fire Fighters Association, the city fire union. Both sides have accused the other of negotiating in bad faith over firefighter pay in the city, with the disagreements often spilling over into the courts and into the public debate around Proposition B in 2018, when Houstonians voted in favor of “pay parity” between firefighters and city police before a court struck the measure down.

If approved, the pay raise would go into effect starting with the first city pay period in July. It would bump up salaries for first year firefighters over $1,000 a year, putting their annual salaries over $51,000 compared to the $43,528 they make now.

“I’ve always said and believed that Houston firefighters work very hard at protecting our community, and deserve a pay raise that the city can afford,” Turner said, echoing his comments at last week’s budget unveiling when he said a firefighter raise was coming soon. He repeatedly claimed that the raise proposal was only possible due to the extra federal cash given that the city faced a $201 million budget shortfall this past year.

Turner said the new pay scale was guided by the recommendations of a firm the city hired to determine “the market average salary range” of firefighters in major Texas cities. He claimed this pay bump puts Houston firefighters within that market average. 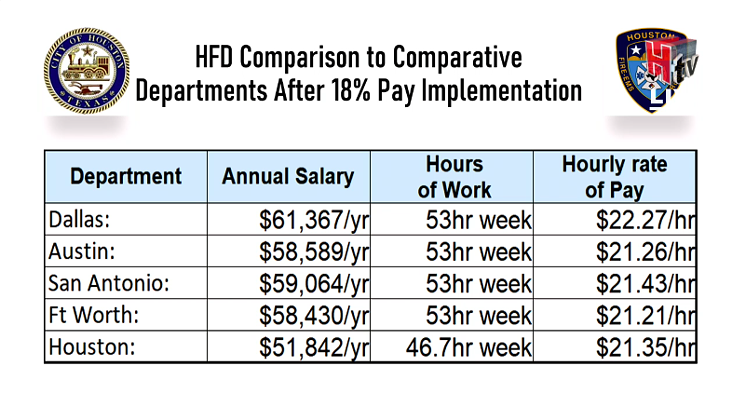 The city hired a third-party firm to analyze firefighter pay in other Texas cities, which Turner said helped guide his latest proposal.
Screenshot
The new hourly pay-rate for city firefighters would end up being “more than Fort Worth, right in line with San Antonio, more than Austin, and just a little under Dallas [firefighters’ hourly pay],” Turner claimed.

Fire union president Marty Lancton told the Houston Press that he considers Turner’s proposal more of “a bonus from the federal stimulus package” than a true pay raise.

“Houston firefighters appreciate a bonus,” Lancton said. “We certainly hope the mayor will now return to the table to resolve all the outstanding issues that the firefighters have with the city through a collective bargaining contract.”

Turner and the firefighters union haven’t sat at the bargaining table together since June 2017, after collective bargaining talks broke down and the two sides couldn’t settle on a new contract. After the failed negotiation, the union wanted their contract to be hashed out by an arbitrator, but Turner refused to enter the contract arbitration process. In turn, the union sued the city.

Earlier this month, the 14th Court of Appeals ruled against Turner and the city in the latest hearing surrounding the ongoing contract dispute. In its decision, which the city is considering appealing to the Texas Supreme Court, the court ruled that a trial court judge could dictate how much firefighters’ salaries would be for up to one year, and could even issue back-pay to firefighters to cover alleged underpayment since 2017.

The most high-profile fight between the fire union and Turner during his tenure was the battle over Proposition B, the union-backed measure that would have set firefighter salaries at equal levels to police salaries of officers at similar ranks. Although Houston voters approved the proposition in 2018 despite a hard campaign against it from Turner, a district court judge ruled it unconstitutional several months later in May 2019. However, an appeals court could still hypothetically overturn that ruling in the future.

Even the Texas Legislature has gotten involved in the debate, as a union-endorsed bill to force the city and the union into contract arbitration, House Bill 2087, was introduced during this past session. That bill appears to be dead given that the Texas House opted not to approve it before a key House deadline last week.

City Fire Chief Sam Peña, a Turner ally who’s sided against the firefighters union throughout these contract squabbles, thanked Turner for proposing the pay bump and City Council for working behind the scenes to support city firefighters.

“Every one of them really have worked to move us past this quagmire that was being created by some to find a way to address the salaries,” Peña said, a thinly-veiled jab at the fire union.

Turner chafed at questions about the lack of negotiations between the city and the union on a new contract, and wouldn’t comment on whether the city would appeal the 14th Court of Appeals’ recent ruling in favor of the union.

Both Turner and Peña claimed the city is willing to negotiate with the firefighters, but Turner said he still was against going into arbitration over the dispute.

Lancton said he and the union are still set on having their contract dispute settled through arbitration, Turner’s firefighter “bonus” be damned.

“We have said on record, and we will say on record today that we encourage the mayor to go to a third [party] neutral arbitrator panel, and get this resolved once and for all,” Lancton said.
KEEP THE HOUSTON PRESS FREE... Since we started the Houston Press, it has been defined as the free, independent voice of Houston, and we'd like to keep it that way. With local media under siege, it's more important than ever for us to rally support behind funding our local journalism. You can help by participating in our "I Support" program, allowing us to keep offering readers access to our incisive coverage of local news, food and culture with no paywalls.
Make a one-time donation today for as little as $1.