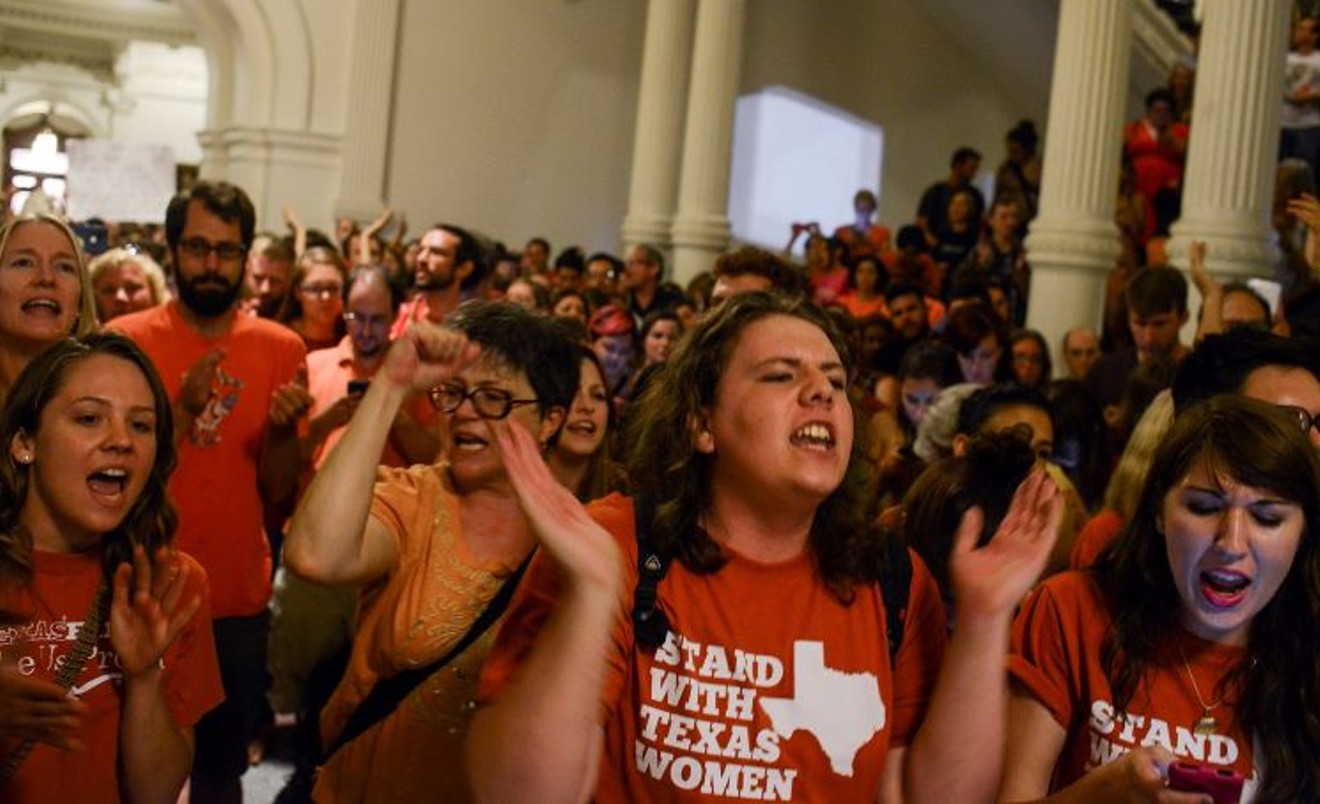 This was the scene at the Capitol in 2017 when Texan abortion advocates were outraged about limitations the Texas Legislature wanted to put on abortion. Blackbird Film Co./Flickr

This was the scene at the Capitol in 2017 when Texan abortion advocates were outraged about limitations the Texas Legislature wanted to put on abortion.
Blackbird Film Co./Flickr
Texas lawmakers have finally rubber-stamped Senate Bill 8, a set of controversial new abortion regulations that would effectively ban abortions after six weeks of pregnancy by allowing people to sue abortion providers as well as anyone who helped someone get an abortion after a “heartbeat” is detected in a fetus.

The state Senate approved an amendment to SB 8 on Thursday added by the Texas House which forbids rapists from suing anyone connected to an abortion carried out by their victim, the last step needed to send the bill to to Gov. Greg Abbott’s desk. Abbott has said he intends to sign the bill into law, which would go into effect September 1, 2021.

Anti-abortion activists and the bill’s author, Republican state Sen. Bryan Hughes, claim a fetus has a detectable heartbeat as early as six weeks after pregnancy, although experts contend that’s medically inaccurate. Democratic state Rep. Donna Howard, a nurse herself, discussed this misconception on the Texas House floor while debating the bill.

In her remarks opposing SB 8, Howard cited the American College of Obstetricians and Gynecologists, whose president Dr. Ted Anderson has spoken out against the use of the term heartbeat in other abortion restrictions across the country.

“What is interpreted as a heartbeat in these bills is actually electrically induced flickering of a portion of the fetal tissue that will become the heart as the embryo develops,” Anderson said. Opponents of heartbeat bills like SB 8 and others across the country also argue that many women don't even realize they are pregnant until after that six-week mark.

“This bill essentially opens the floodgates to allow anyone who is hostile to abortion to sue doctors and clinics, consuming their resources and forcing them to shut down,” said Nancy Northup, president of the Center for Reproductive Rights.

Amy Hagstrom Miller, CEO of Whole Woman’s Health — which operates four abortion clinics in Texas — said she was dismayed by how so many Texas lawmakers “are determined to legislate abortion out of existence.”

“We see firsthand that Black and Brown communities are hit hardest by these oppressive laws and we know these laws do not reflect the values Texans hold,” she continued.

SB 8 was specifically designed to be tougher for the courts to block from going into effect, as has been the case with other strict abortion restrictions the Texas Legislature has tried to enact in years past.

Instead of placing the burden of enforcing the law on public officials within the state government itself, the bill would give any person the right to sue anyone who either performs an abortion or anyone that knowingly “aids or abets the performance or inducement of an abortion” of a fetus if a so-called heartbeat has been detected in an ultrasound.

The language is intentionally vague and casts a massive net. Anyone who drives someone to get an abortion, anyone who helps even in part to pay for an abortion, or even anyone who simply talks with someone about having an abortion that ends up occurring could be held liable for up to $10,000 in damages if they lose in court when sued under this potential law.

Anyone who drives someone to get an abortion, anyone who helps even in part to pay for an abortion, or even anyone who simply talks with someone about having an abortion that ends up occurring could be held liable for up to $10,000 in damages if they lose in court when sued under this potential law.


The bill doesn’t even require potential plaintiffs to be Texas residents, and they don’t even have to personally know the person who received the abortion to be able to sue. And if abortion providers or anyone who helps someone get an abortion were to win in court, the person who sued wouldn’t even be responsible for paying their target’s legal fees.

In the past, abortion advocates and providers such as Planned Parenthood have been able to quickly sue the state agencies charged with implementing new abortion restrictions, which has often led to those new restrictions being delayed by the courts. That’s also been how heartbeat bills in other states have been blocked from going into effect, but since no state agency would be responsible for enforcing SB 8 if it gets signed into law as expected, it’s unclear how pro-abortion groups in Texas would fight back.

Over 370 Texan lawyers and over 200 doctors who work in the state wrote to Speaker of the Texas House Dade Phelan in opposition to SB 8, which the lawyers contend would “create a new unconstitutional restriction on abortion” and that the doctors argue “will place physicians at risk of frivolous lawsuits that threaten our ability to provide healthcare in Texas.”

“The Texas legislature has no right to cause this type of grievous harm to Texas physicians or the people we serve,” the doctors’ letter read.
KEEP THE HOUSTON PRESS FREE... Since we started the Houston Press, it has been defined as the free, independent voice of Houston, and we'd like to keep it that way. With local media under siege, it's more important than ever for us to rally support behind funding our local journalism. You can help by participating in our "I Support" program, allowing us to keep offering readers access to our incisive coverage of local news, food and culture with no paywalls.
Make a one-time donation today for as little as $1.