Texans DE J.J. Watt: "We Need To Hold Up Our End of the Bargain" 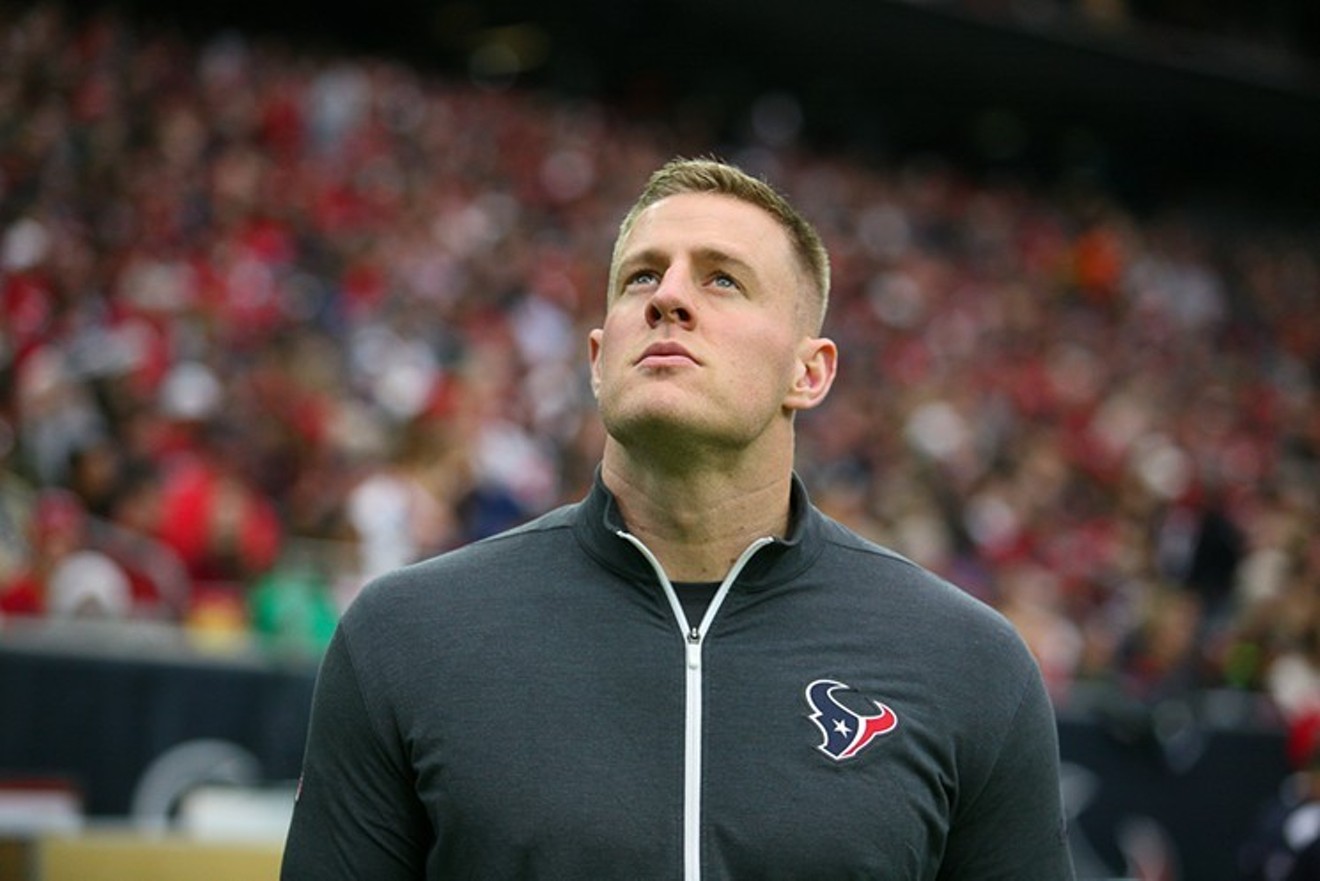 Preseason activities began with a series of press conferences on Tuesday at NRG Stadium. Photo by Eric Sauseda
On Tuesday, the most highly anticipated season in the history of the Houston Texans (I don't think it's a reach to say that) began with a series of press conferences from some of the stars of this team. It was nice to see that J.J. Watt has two working legs again, it was nice to see Whitney Mercilus healthy and ready to go, and it was very cool to realize, once again, that "HOLY CRAP! Tyron Mathieu is a TEXAN!"

Honestly, though, my biggest realization from the parade of interviewees that the Texans marched to the podium — a process I admittedly watched play out on Twitter and the internet as I was show prepping back at the SportsRadio 610 studios —- was how much star power exists on this team. They made J.J. Watt, Tyrann Mathieu, DeAndre Hopkins, Whitney Mercilus, and Deshaun Watson available. Those are STARS.

Of course, it's what happens with the rest of the roster, specifically the offensive line, that has most Texans fans anticipating next week's draft. However, there were other issues to discuss with those five players on Tuesday. Here are the answers to some of those issues:

J.J. Watt on the added pressure of coexisting with Astros and Rockets

.@JJWatt: "Trust me we don't live in a cocoon. We know the #Astros won the World Series. We know the #Rockets are killing it...We want to do our part. We know Texas is a football state. We need to hold up our end of the bargain." #Texans pic.twitter.com/LcITou0SRC


SP REACTION: This is always a big question on our show — how much do the Texans notice the success of the other two big teams in town, and does it factor at all into their decision making? I think you could argue that the one decision that LOOKS LIKE a quasi-reaction to the Astros' and Rockets' success is the aggressive move to get Deshaun Watson last spring, but even that transaction pre-dates the Astros winning a World Series and Chris Paul becoming a Rocket. One thing that IS certain — the Texans' PLAYERS notice that success. Hell, some of them have been sitting in the front row at Toyota Center and Minute Maid Park to watch it. If the Texans get back to the playoffs, Houston is in the running for Best Sports Town in America, without question.


Mathieu said he's "sat down and talked" with owner Bob McNair and called him "a great man." Said McNair's comment about inmates running the prison (which McNair has always said was about the owners and NFL executives) didn't have a bearing on his decision to sign with the Texans.


SP REACTION: At this point, the hay is kind of in the barn with respect to McNair and how players think of him, so I don't know how much Matheiu's thoughts on McNair really help the Texans' owner at this point, but they certainly don't hurt. One thing it does reinforce is that McNair's "inmates" comment at the meeting between owners and players last year has not been nearly as impactful on free agency decisions, specifically players rejecting the Texans, as some thought it would be.


DeAndre Hopkins on Bob McNair comments: 'Bob is a great guy, I could never say anything bad about him.' Said his walkout from practice wasn't about McNair's 'inmates' comments, said he had personal issues he needed to deal with that day


Tyrann Mathieu on recruiting Dez Bryant: 'You just want that person to feel like he's wanted again. I messaged him last night trying to get him here.'


DeAndre Hopkins on Dez Bryant: 'I love Dez. I looked up to him in college. I watched him a lot in college and high school. I've always been a fan of his. Why not reach out to a guy who can help a team win? He's a great receiver'


SP REACTION: We covered this extensively on Monday — it appears that some of the players on the Houston Texans would love to welcome Bryant into the fold. I'm uncertain if Bill O'Brien and Brian Gaine are aware of this, or, more importantly, if they concur with it.


Hopkins on Watson: "I expect us to be the best duo in the NFL, honestly. That's our goal. The sky's the limit with what that kid can do."

Watson on Hopkins: "As far as potential, it's through the roof... Our mindset is that we want to break records together, and as a team."


SP REACTION: Good! A nice, ready made, "talk radio" topic! So where does the duo of Deshaun Watson and DeAndre Hopkins rank among QB-pass catcher (WR or TE) duos? In terms of past accomplishments, it's pretty low, since Watson has only started six games, so let's say in terms of potential, i.e. which duo would you want on your team in 2018? I'd go with this as the short list:

Those are a handful of duos I see jockeying for the top of the pack next season.


Whitney Mercilus said it'll be different without Brian Cushing: 'He's always been the heart and soul. That's just how the game goes'

SP REACTION: I feel like part of the Texans' player and coach's compensation package is that they receive some sort of stipend every time they remind us that Brian Cushing was the team's "heart and soul."