For Hate of a Sneeze: Why the WWE is Still Live During a Pandemic 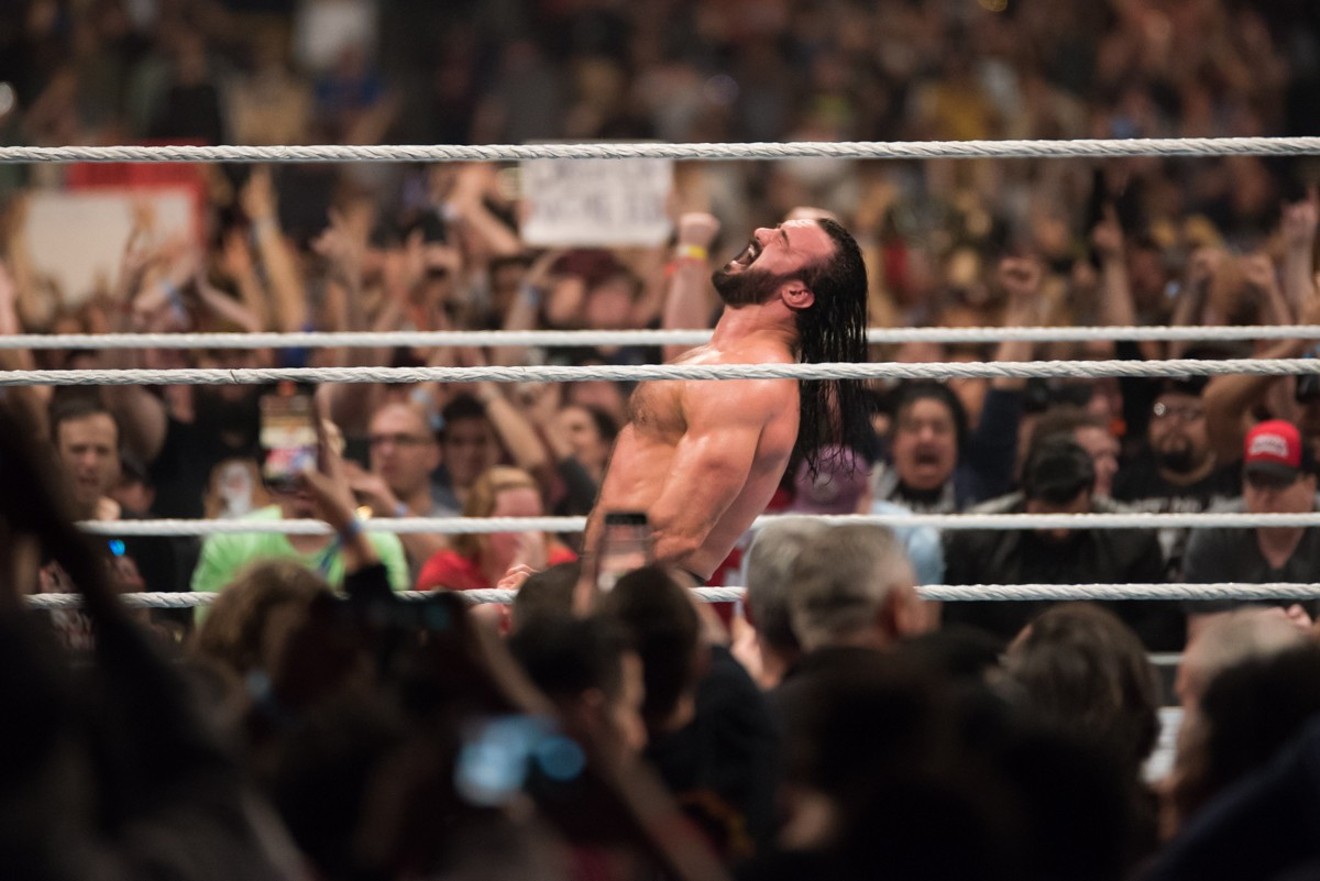 The 2020 Royal Rumble, held in Houston, may go down as the largest pro wrestling event in North America this year. Photo by Jack Gorman
Of all the things that Florida Governor Ron DeSantis thought he might end up talking about during a pandemic, one imagines that World Wrestling Entertainment was not a subject near the top of the list. "Controversy" isn’t the right word, but many an eyebrow was raised recently when it was announced that the company was considered an “essential service” by the state, meaning they could have their workers resume live television production. As pro wrestling involves physical contact, holding matches during a pandemic seems to some to be reckless at best and dangerous at worst, especially given the news that at least one on-air talent had tested positive for COVID-19.

Surely the Governor would have a good answer for this; with many small businesses closed, there’d have to be a compelling reason to let a company from out of state (the WWE is headquartered in Connecticut) operate while local businesses remained shuttered. You can listen to his reasoning for yourself, and decide if his word salad about “content” makes him sound like anything other than the social media guy at a third rate Buzzfeed knock off.

Many have suggested since the news about their return to live TV broke that the WWE’s return to the airwaves has less to do with the public good and more to do with the fact that company owner Vince McMahon’s wife Linda McMahon is the head of a SuperPac that is going to spend millions of dollars in Florida on behalf of President Trump. The announcement that her SuperPac will be spending $18.5 million in the state happened the same day the Governor decided that wrestling was a thing allowed in the state as long as there was no audience present.

Truth is though that the “how?” of WWE’s return to live television is less interesting than the “why?” of their return to live television. The WWE is putting at risk not just the health of their performers but the goodwill the company had built up over the last few weeks. Their decision to run Wrestlemania, their biggest show of the year, in an empty gym, came with no small amount of debate among wrestling fans, but against all odds, they managed to deliver one of the best Wrestlemanias of all time while managing to comply with Florida’s regulations on social distancing at that time. Putting on a good Wrestlemania is hard to do even with the best health and economic conditions, so what they pulled off felt like a minor miracle of sorts.

So what is to gain by pulling their workers back from home and putting them back on television to punch and yell and sweat? The obvious answer is that it’s a calculated business decision; they have TV time they’re obligated to fill with live content, and failure to meet that obligation would cost the company millions of dollars. Vince McMahon has already lost the XFL to this pandemic - the league recently declared bankruptcy - so keeping his television partners happy has to be a thing that looms large in his mind. But if you’re the type of person that follows the behind the scenes action that really makes wrestling a hobby worth following, Vince McMahon’s decision to start putting his workers back in the ring during a global pandemic seems like the most Vince McMahon thing he could do for one simple reason.

Vince McMahon hates sneezing.
Everyone has something weird that drives them mad, and for Vince McMahon it’s sneezing. While some under his employ have chalked his dislike of the bodily function to simply thinking it is a gross thing to do, his daughter is on record as stating that McMahon sees sneezing as a bad thing because it’s something he can’t control, something closer to a personal weakness rather than an involuntary thing our bodies do on a regular basis. It's said that if you sneeze around McMahon, don't bother telling him anything for at least 20 minutes because he's not likely to take you seriously.

A global pandemic must rank pretty high on the list of worst-case scenarios for McMahon. For someone who yearns for complete control over his body and business, a disease that causes involuntary bodily responses while also taking away his ability to do business the way he sees fit is the ultimate body blow. McMahon can only respond the only way he knows how: like a professional wrestler. Putting his workers back In the ring is thumb to the eye of a more powerful opponent, a way to take back control from a situation that made him feel less powerful. It's not without risks, but if time has proven anything, it's that Vince McMahon knows how to navigate tragedy and come out largely unscathed.

The same day the governor of Florida was answering questions about the WWE, Vince McMahon came up during a different political press conference. He’s part of a group talking to President Trump about how to bring sports back to America. Trump even went as far as to label McMahon as “great” when mentioning him by name. A pandemic may have slowed him down, but Vince McMahon refuses to let anything stop him. Not a pandemic. Not a stay at home order. Certainly not a sneeze.
KEEP THE HOUSTON PRESS FREE... Since we started the Houston Press, it has been defined as the free, independent voice of Houston, and we'd like to keep it that way. With local media under siege, it's more important than ever for us to rally support behind funding our local journalism. You can help by participating in our "I Support" program, allowing us to keep offering readers access to our incisive coverage of local news, food and culture with no paywalls.
Make a one-time donation today for as little as $1.