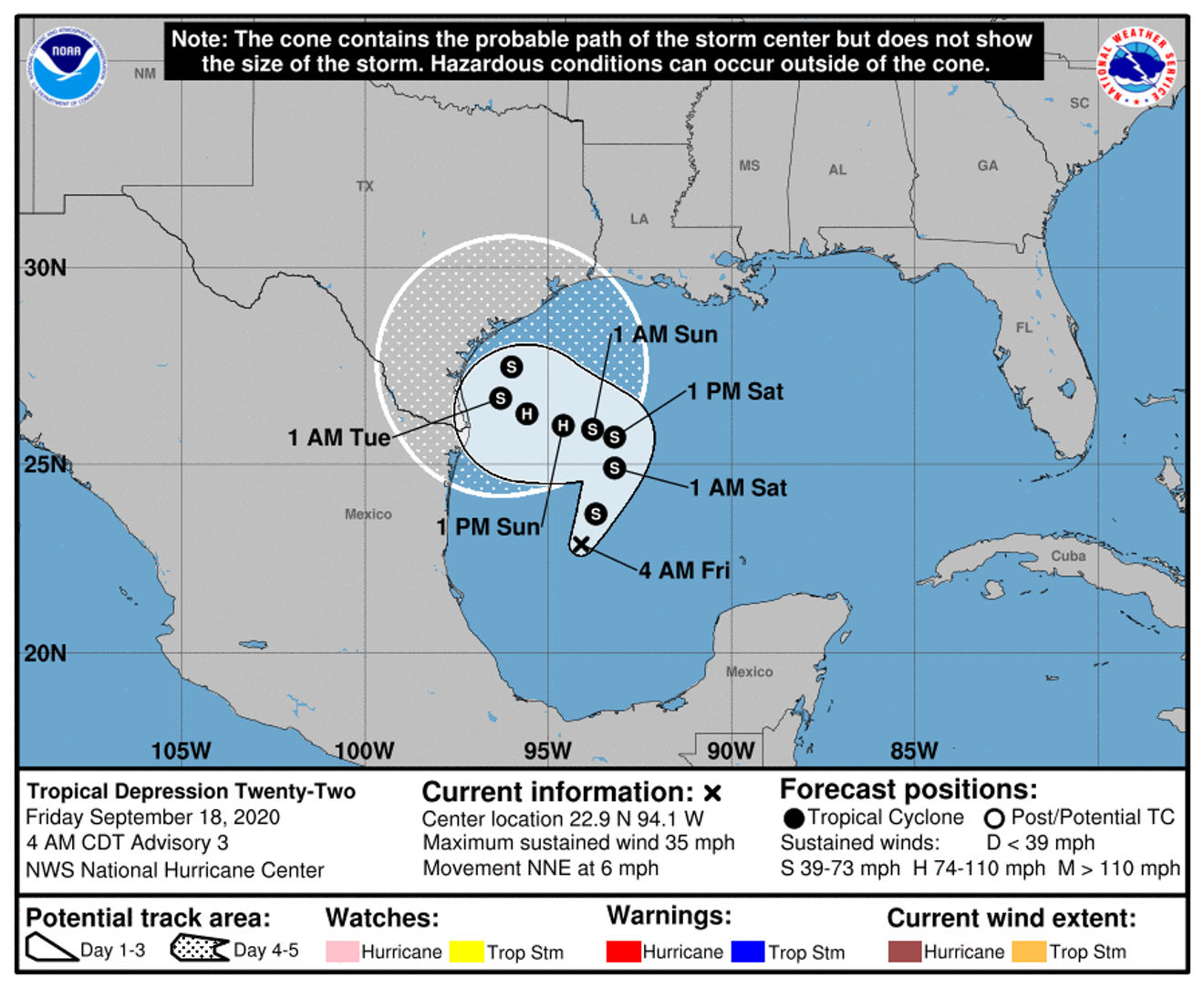 TD 22's forecast is very complicated especially after 3-4 days. National Hurricane Center
As we get closer to the end of September, the threats to the Texas coastline from hurricanes gradually diminish. This is thanks to the eventual steady line of cool and cold fronts that begin pushing through the state. But, as if we needed any evidence we aren't there yet, we have a tropical depression to talk about.

Tropical Depression 22 is currently moving very slowly north in the south-western Gulf of Mexico. It is elongated and disorganized, but the warm waters of the Gulf mean it has the potential to strengthen over the next few days. The National Hurricane Center believes it will reach tropical storm strength perhaps as early as today. It would then be named Wilfred. W is the last letter in the hurricane alphabet, so any named storm after it would begin with Greek alphabet characters. It's that kind of year.

TD 22 is expected to move north and then west over the next 3-4 days, gradually strengthening into either a tropical storm or potentially a hurricane. However, the cool front that just pushed through and will bring us some spectacular weather later on Friday and Saturday will also force dry air into the region, which is going to wrap into the storm limiting its ability to intensify and probably even weakening the storm as it meanders closer to Texas.

This is not expected to be a powerful wind storm, but it is going to dump a lot of rain. Where is the big question.

What We Don't Know

The big problem with TD 22 is the weak steering currents in the region. That means the storm will move very, very slowly and it's unclear exactly where it will go. After the initial forecast from the NHC, it's possible TD 22 (or Wilfred) could move onshore in northern Mexico or southern Texas, it could move onshore north of that maybe near the coastal bend, or it could get pushed north and northeast into Louisiana.

While it is moving slowly, it will drop a ton of rain. With this current forecast, the vast majority of that rain will be offshore. But, if it moves inland, the area where it goes could see 10-15 inches of rain over the course of the next 5-7 days. If it moves slowly along the Texas coastline, it could affect a wide swath of the coast, predominantly places right near the Gulf like Galveston or Freeport.

First off, this is not Hurricane Harvey. It might inspire anxiety because of the potential rainfall, but no forecast is expecting anything like that. However, it does have the potential to produce quite a bit of precipitation and, perhaps more importantly, much higher tides than normal. Low lying areas along the coast will absolutely be susceptible to flooding as a result.

Here in Houston, it is difficult to say what it will mean to us. The farther you are from the coast, the less your chances of rain, but much of the Houston area is still expected to receive perhaps 3-5 inches of rain from Sunday afternoon through Thursday as the storm tries to figure out what it is going to do.

We should be able to handle the rainfall and, to be honest, we could use it. But, obviously too much of anything is problematic.

For now, you should continue to monitor the storm. It is in the Gulf of Mexico. It is moving slowly. That both gives it time to change and grow, but also you plenty of time to prepare. Forecasters do not believe this will be a serious wind threat or a rain maker on the order of Harvey or Allison. Still, this is hurricane season, so we don't know.

We are closing in on fall, but it ain't here yet.
KEEP THE HOUSTON PRESS FREE... Since we started the Houston Press, it has been defined as the free, independent voice of Houston, and we'd like to keep it that way. With local media under siege, it's more important than ever for us to rally support behind funding our local journalism. You can help by participating in our "I Support" program, allowing us to keep offering readers access to our incisive coverage of local news, food and culture with no paywalls.
Make a one-time donation today for as little as $1.