Houston Hit With Another Round of Racist Flyers, This Time With a Bonus: Hitler's Picture 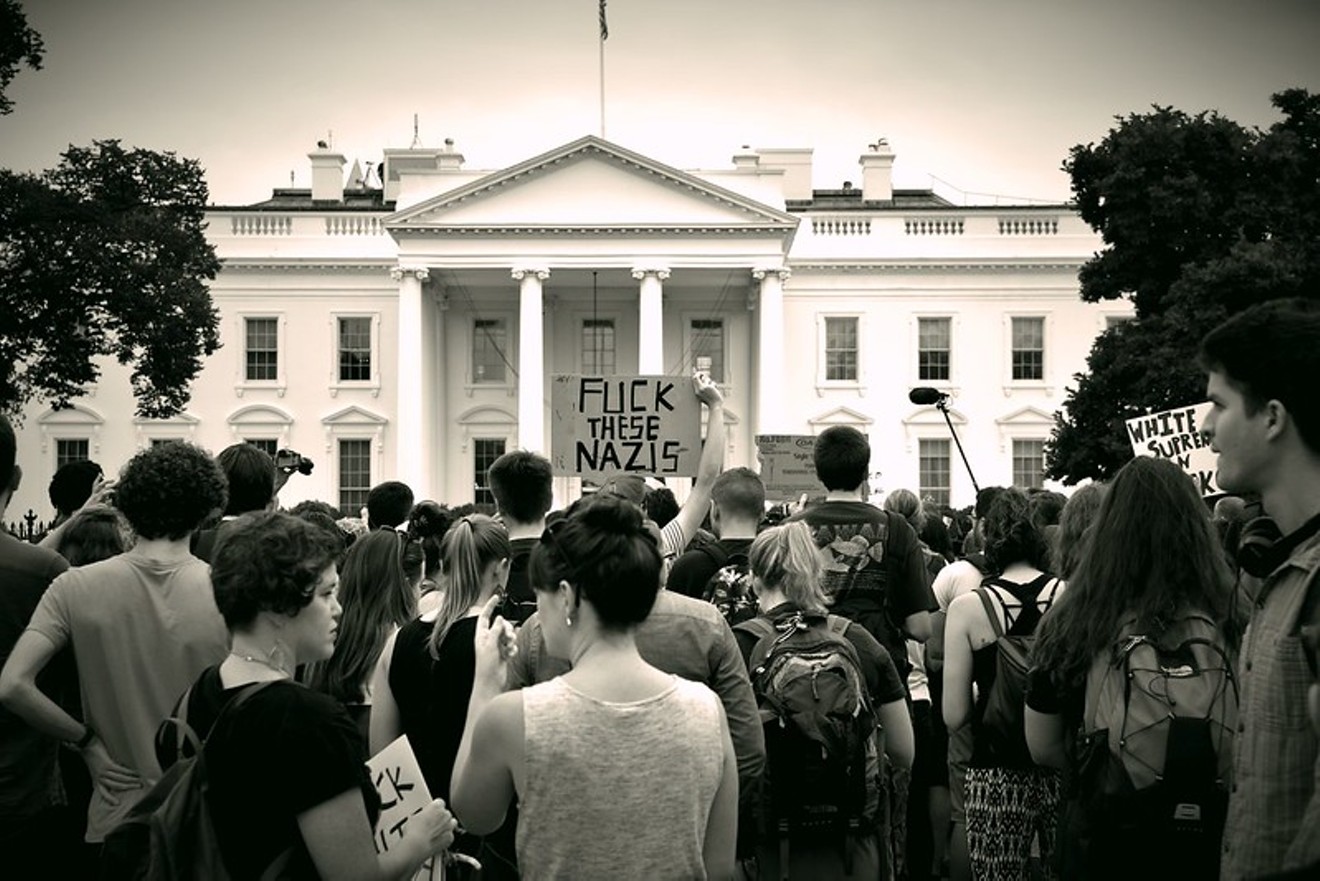 An anti-racism protest outside the White House in 2017. Photo by Kelly Bell Photography/Flickr
White supremacists have been at it again in Houston, this time hitting multiple neighborhoods around the city with racist flyers. This weekend, the Heights was hit with a round of leaflets featuring the face of Adolf Hitler and the phrase “white lives matter.” According to the Houston Chronicle, previous neighborhoods targeted include Atascocita and northwest Houston a few months prior.

While the new campaign is definitely overtly racist, it’s worth looking at this as an escalation rather than a new phenomenon. Last month, similar flyers were left around three neighborhoods in Austin. Like the Houston campaign, these were weighted down with rocks, but there was a slightly different message: It’s okay to be white.

This is not the first time that particular phrase has been used to deface Texas cities and terrorize non-white residents. In May 2018, the Rothko Chapel and a sculpture dedicated to Martin Luther King was vandalized with white paint and littered with “it’s okay to be white” flyers.

The phrase was born on the internet forum board 4chan a year earlier. The goal according to posts was to “trick” liberals into being angry and “prove that they didn’t think it was okay to be white. However, the seemingly mild phrasing was immediately linked to white supremacist websites and groups, who had all used the phrase in the past. While the campaign may have been intended as a troll, it’s results quickly became indistinguishable from an actual white supremacy campaign.

When I first covered the Rothko Chapel incident, I got a lot of angry letters from people desperate to prove that what happened was not actually racist.

“Rouner, methinks doth protest too much,” said one responder using the obvious pseudonym of B. F. Skinner. It could have been a small herd of lost in the ‘70s Birkenstock-wearing ponytailed, reactionaries that colored the Rothko Graveyard of banality or the plagiarizing philanderer at-a-boy Mickey King trophy rather than the hackneyed ‘white supremacists.’ You don’t know! The ‘beloved’ chapel is considered a pimple on the cultural ass of Hou-Town by many who can read who are not supremacists and who are not Holier Than Thou. Stop littering this newspaper with your ingrained anger and struggle on through potty training.”

Another one I received from a Woodlands resident named Ralph also rushed to try and make the point the phrase was not actually racist, as well as blaming anti-racism protestors for getting police killed.

“You seem to lump in all People of Absolutely No Color, the melanin-impaired if you will, as the attackers,” he said. “That's racism if PONC is a race…there is no white guilt, and even if there was, who really gives a fuck about it as there isn't any race change operations available to get out of it. Are you getting a race change? You can identify as an Asian female according to progressive ideology. Anyhow, stop blaming singular events on a group of people. The stupid BLM group did that and blamed all cops for one event. The next thing that happened was a police officer getting killed while filling his police car with gas.”

There is a frightening level of escalation in the flyer campaign. It’s gone from a place of at least plausible deniability to outright symbols of white fascism. It’s hardly surprising as conservatives in Texas continue to ramp up the delusion that whites are under attack by a diabolical cabal of leftists indoctrinating children into hatred through public school lessons.

As you can see from the letters I received back in the days when people were still pretending “it’s okay to be white” meant something else, the people defending it still couldn’t help themselves from spouting racist rhetoric. It seems that even that thin veneer is now being stripped away, and the white fascist movement is getting bolder.
KEEP THE HOUSTON PRESS FREE... Since we started the Houston Press, it has been defined as the free, independent voice of Houston, and we'd like to keep it that way. With local media under siege, it's more important than ever for us to rally support behind funding our local journalism. You can help by participating in our "I Support" program, allowing us to keep offering readers access to our incisive coverage of local news, food and culture with no paywalls.
Make a one-time donation today for as little as $1.