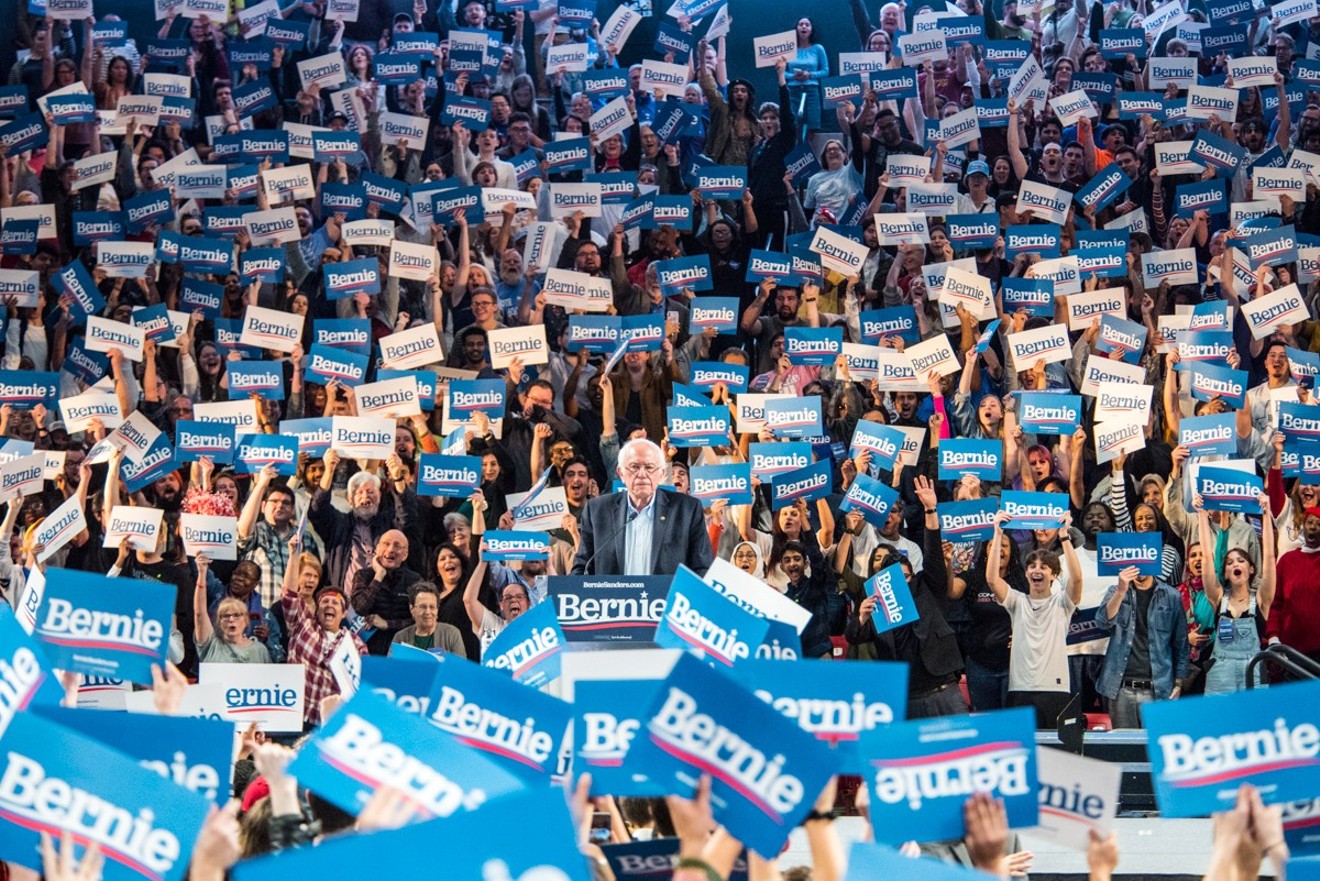 Bernie Sanders at a Houston rally in 2016. Photo by Jack Gorman
February is always weird for me because when I scroll through Facebook memories, I see all the people I lost to the cult of Bernie Sanders in 2016. It’s also a reminder that the Big Lie of the rigged election didn’t start with Donald Trump; it started on the left about the 2016 Democratic Primary.

It’s impossible to overstate how the rigging myth has overtaken and endangered American democracy. It was the justification for the violent insurrection at the capitol on January 6 where a reactionary would-be fascist coup had the plans and the tools to capture and kill sitting U.S. lawmakers. Trump recently lost his entire legal team for his upcoming second impeachment trial because he insisted that they lead with the lie that he secretly won the election last year. This belief will remain a destabilizing part of American politics for years, perhaps decades to come.

And it was beta tested on the junior senator from Vermont.

Within hours of the first primary contest in Iowa against Hillary Clinton, the internet was on fire with conspiracies about coin tosses and missing delegates. It burned bright on the potent fuel of the whole superdelegate question, which said that Clinton was receiving “unfair” treatment for having lined up support from party bigwigs.

Things escalated over the course of the spring and early summer. Kurt Eichenwald, the journalist who more than anyone understood the new strain of reality denialism on the left, has called these the myths Democrats swallowed that cost them the election. When the DNC email hack came out it was “proof” that the party elites had conspired to keep Sanders from ever having a fair shot.

In reality, nothing that the DNC was ever accused of was in any way “rigging.” The DNC does not run elections; the states do. Sanders did not lose the primary because of a debate schedule, or because a moderator gave Clinton the topics of a debate ahead of time, or because by May the party was sick of playing along with the delusion that Sanders had a shot of winning.

That last one is where the rot really came from. By the middle of April, it was clear that Sanders just didn’t have the delegates to win. He had been destroyed in Super Tuesday and lost the support of the party’s Black voters. By May, it was mathematically impossible for Sanders to catch up, but he refused to concede.

Into this vacuum between the practical end of his campaign and the convention came the Russian pys-op and the email hack. It was an obvious piece of foreign election interference from the get-go, but it still amplified the conspiracy theorists into a frenzy. I had a friend who was a delegate in 2016, and I finally blocked her across social media after watching her live-post about walking out of the building as part of a protest against the “stolen” election.”

Sanders knew that he had no chance by the time all that happened, and he certainly knew that the people behind the Russian psy-op were operating on his behalf to smear his opponent. Yet, he stood by and let it play out with a vague goal of “bringing his message to the convention.” In doing so, he fostered a false hope that some last-minute miracle would thwart the candidate who had won the most votes. That hope put his most ardent supporters into a dangerous frenzy that is far too similar to what happened at the Capitol.

Donald Trump watched all this avidly. In fact, he was an frequent champion of the idea that Clinton had stolen the primary from Sanders and tweeted about it regularly. He saw the damage that narrative could do, and four years later he would embrace the potential of the Big Lie to try and stay in power.

That’s where we are now. The left is more or less united in denouncing the rigged election narrative of Trump, but we would do well to remember that the ball got rolling in our own primary and with similarly ridiculous basis. We are not immune to bullshit, and we must be vigilant in dropping such tools before they get used against us by the right.
KEEP THE HOUSTON PRESS FREE... Since we started the Houston Press, it has been defined as the free, independent voice of Houston, and we'd like to keep it that way. With local media under siege, it's more important than ever for us to rally support behind funding our local journalism. You can help by participating in our "I Support" program, allowing us to keep offering readers access to our incisive coverage of local news, food and culture with no paywalls.
Make a one-time donation today for as little as $1.